One of my regular canoe partner's wife has an active local club titled Stitch and Bitch where her and some girlfriends gather during the winter months, on a Friday evening of every second week, to knit sweaters and chat about their lives over wine and cheese. That gave my buddy and me an idea; we started up our own club - Map and Flap - where we meet on alternative Fridays to glance over maps, yak about our next outing or reminisce over past trips over beer and pizza. 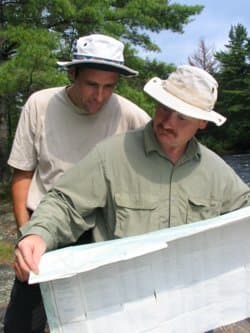 Maps create dreams; that's why we appreciate them so much. A cluster of contour lines represent a hill to climb; a ribbon of blue is a river waiting to be run down; dotted islands across a sprawling lake contain the perfect places to pitch a tent; an isolated pond is that place of solitude you've desperately been seeking out. Maps contain our future adventurers and past misadventures, which is why I've decorated my office walls with them. They help inspire me while writing and sometimes give me an excuse to dream the day away, glancing over the penciled comments posting nasty rapids, long portages or picture perfect campsites. Squashed mosquitoes even decorate some; others contain a moldy scent to remind me of an unplanned dump in a stretch of whitewater.

Topographical maps provide the best two-dimensional view of a third-dimensional world. There's a lot of parks and protected areas that provide the visitor a personalized map of the landscape, but it's the topographical map that provides the most features. The detail of each topographic map is judged by its scale. The smaller the scale is the less detail that is shown. They range from 1:10,000 to 1:100,000. For back-country use the most common scale is 1:50,000, meaning 1 cm (3/8 in.) on the map is equivalent to 500 m (1600 ft) on the ground. This scale size covers the most ground per map and still has enough suitable information, saving you a lot of money in the long run. However, if you require more detail on a specific area (i.e. a long series of rapids or cliff face) then use the 1:25,000 scale.

Apart from marking the location of lakes, rivers, rapids, falls, roads, trails, etc., the most useful information that can be obtained from a topographic map is the topography of the land you are traveling on. The wavy brown lines on the map, labeled contour lines, do just that. Each line marks where the position of the land is above sea level. Every fifth contour line, called an index contour, has the elevation marked somewhere along its length. Each type of map may vary, but the vertical height between each interval is usually 10 meters (approximately 50 ft). So the closer the lines are together the steeper the grade. Also, the direction a creek or river is flowing is determined by having the closed ends of the contour lines (the tip of the "V") point upstream.

The original information for topographical maps was obtained by aerial photos, most of which were taken between the 1930s and 1960s. When you think about it, not only is that a lot of flight time, its also a long time ago when the photos were taken. The maps are routinely updated but you can never count on complete accuracy. A case in point, a group of American paddlers traveling the Missinaibi River in northern Ontario noted the portage around the 40 foot Thunderhouse Falls to be on the right. It's actually on the left. Two of them drowned.

It's also quite possible to become somewhat obsessed with using maps. I have a tendency to check my whereabouts a little too often and my regular canoe partner constantly reminds me of that. He's caught me referring to the map rather then the actual landscape stretched out in front of us far too many times, and during our last trip together he finally rebelled. It was when I checked the position of some rapids while we were in the midst of paddling through them. After that he hid the map from me for two full days and insisted I travel confused of our whereabouts for a day or two to teach me a lesson. It worked. I have no idea what lake or river we paddled after that, but it was the most scenic landscape I can remember ever experiencing. It was also our main topic of conversation during our last Map and Flap gathering. 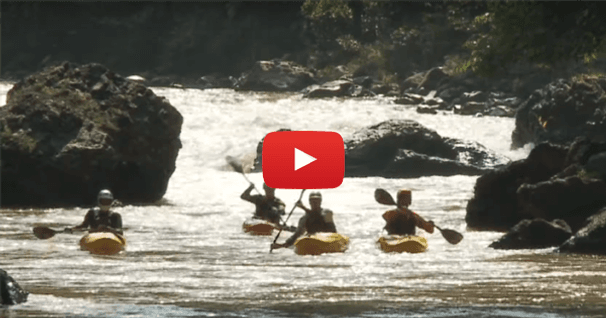 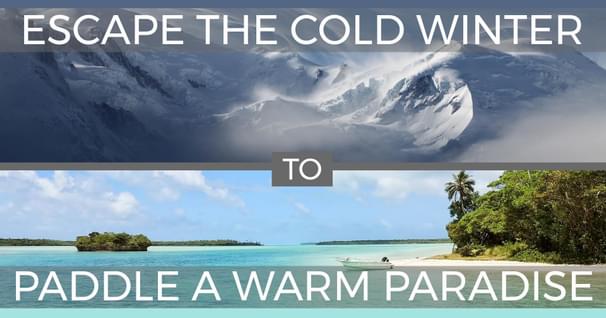 Even if the promise of travel seems to have gone awry, the pull towards a warm, tropical paddle…