The access point on Lake Monson is at the head of a small inlet on the amoeba-shaped, glacial formed lake. Paddling out towards the center, the ring of small, rounded headlands each become visible from my bobbing perch in my solo canoe. There are several lakes clustered together and joined at the hip by a meandering isthmus of maples – a strip of woods easily portaged. 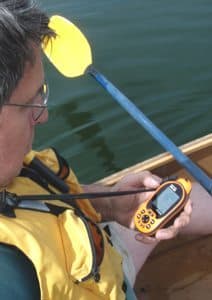 GPS in hand, I decided to add the portage trailhead as a waypoint. I paddled over to the appropriate bay and gently nosed the canoe into the shallow sandy bottom near shore. A cleared and worn path snaked up from water's edge, through a narrow row of maples and out across the county road.

I turned on the GPS and waiting until it showed it was registering satellite linkages. The arrowhead cursor was already marking my location on the small map in the window. All I had to do now was push the button marked with the map pin icon and my portage waypoint was registered. A few keystrokes later and it was listed by lake name in my unit as well. Such are the workings and convenience of the paddler-friendly Global Positioning System or GPS network.

The GPS network is a system of 24 satellites orbiting about 11,500 miles above the earth while zipping around the planet at 2,000 miles per hour. At that rate they can circle the earth twice in one 24-hour period. That orbit is very precise and timely. The information sent from these satellites is used to triangulate exacting positions on the ground. How exact? Well, the ones used for consumer operations such as my waypoint marking that portage are exact to within about ten meters – anywhere on the globe. That's pretty darn good shooting in my book.

However, since this system was first developed by and for the Dept. of Defense, programs used for surveying and other similar tasks are accurate to within one millimeter of the target. The system is called Navstar. Similar satellite networks are also in operation in Russia, China and the EU. 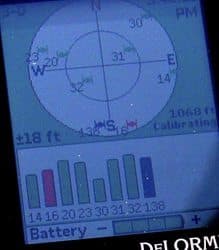 So how exactly does this all work for a paddler with a hand-held GPS unit? The GPS unit can receive signals from all 24 satellites in the Navstar constellation of satellites orbiting overhead. It needs to lock onto at least three of them to calculate a basic latitude/longitude position. By locking onto at least four signals, it can determine altitude as well. Those three positions (called 3D) enable the GPS unit to relay that information in the form of a fixed location on the planet within an error range of about +/- ten meters (from over 1.8 million meters away!). Since the satellites are moving at speeds that can be calculated, the distances being covered over time by a GPS unit on the ground can be determined as well.

While out on Lake Monson, I clipped along at a leisurely 3.8 mph as determined by my GPS. If I had set a course or input a predetermined waypoint, the unit would be able to calculate my estimated time of arrival (ETA) based on the collective information provided by the satellite. More on other applications later.

There are other factors that determine the degree of accuracy available through a GPS unit. This same technology is used in other signaling devices that can then also pinpoint the user’s location. Shipboard EPIRBs and ELTs used by aircraft will broadcast a signal that is picked up by a satellite and relay that info to ground stations that will help triangulate a ground position. Some Personal Locator Beacons (PLBs) will likewise use GPS technology to help pinpoint user locations on the ground.

A kayaker disoriented at sea, for example would have the following options depending on which type of signal unit he/she carried. A VHF radio would enable a vocal signal to be sent randomly to a receptive receiver (another radio) but would not determine position. A PLB would send out a message of distress and use satellite technology to show its position – but typically no verbal communication is available (the SPOT signaling device does have a message capability). A GPS unit as we are describing here would let the user know his/her location, enable them to track towards known points and to plot out points for future trips. It does not broadcast or communicate for rescue applications – unless it is combined with such a unit that does so specifically.

There are several models/brands on the market today. Prices vary from barely over $100 to well over $400. In previewing units for this article, my only criteria were the two important features I thought critical: reliable performance as a GPS and absolutely waterproof, not water resistant.

Of those on the market, let's look closer at paddle-friendly* units by Bushnell, DeLorme, Garmin and Magellan.

Bushnell ONIX400 – Features "TruView" Navigation that lets you plot your course using images on the screen against your surroundings. You can layer a satellite photo, topo map, and other navigational aids on the same screen. It also features NEXRAD weather data for your specific location. It also entertains with XM satellite radio. Other features include a 3.5" full color LCD, downloads/ displays and geo-referenced satellite photography. *IPX7 waterpoof).

DeLorme Earthmate® PN-40* - It has the capacity of having a wide variety of maps downloaded, this is especially appealing knowing Delorme's reputation for such graphic aids. PC users can utilize Topo USA PC softwear with its 3-D capabilities. Other features include a high-sensitivity 32-channel GPS with dual-core processor, 3 axis electronic compass and 2.2" high res' Transflective TFT color display, compass, barometer/altimeter and IPX7 waterproof.

Garmin - GPSMAP® 76Csx* - This unit is not only waterproof (IPX7) but is the only one of the group that floats, too! (A floatable lanyard can add buoyancy to the other units). It's Garmin's mariner-friendly 76-series navigators with GPS, barometric altimeter and electronic compass, color TFT and turn-by-turn routing. It accepts optional preloaded microSD cards with MapSource® data.

Magellan®Tritron™ 2000 - North America – I believe this replaces the Magellan Meridian series that was a recent popular model. It features a large touch screen, 2 MP camera, voice recorder, LED flashlight and picture and sound recording – the "Dick Tracy" model of GPS unit if you will. It also a 2.7" QVGA color touch screen.
*(NOTE: the PN-40 and the 76Csx are the most popular models among "serious outdoorsmen" according to a staffer at my local REI).

The SD cards that come with units are usually stored in the battery area within the waterproof casing of the units. A handy lanyard enables one to wear the unit around the neck (NOTE: I wish they'd attach at the bottom so you could lift it straight up and read instead of having to turn it 180 degrees to read it when it's hanging around your neck.) The recharging contacts on the DeLorme are exposed, too – I think it would be better if they were protected.

These units are priced all over the Internet from $200 to $400+. They offer myriad ways to document your trips, plan new adventures and monitor your paddling speed. They'd be useful in plotting/monitoring channel crossings, tidal currents, recording alternative routes, favorite kayak campsites, and many more notations that now might end up smudged into the margin of a nautical chart.

I would recommend taking the time to shop around and get a feel for the unit, its ease (or not) of operation and the need (or not) for some of the bells and whistles built into the unit. Battery life may be a factor, too, especially if you spend too much time playing with some of added features. Make sure you’ve put your GPS through its motions before depending on it during a trip.

A prudent paddler should carry a radio and a good signaling device. A nav' tool such as a Global Position System unit adds one more layer of safety – and that's a good thing.