Loading a canoe by yourself can be awkward and difficult but with some practice and a few of these tips, loading a canoe on the top of your car can be easy!

Someone asked me the other day how do I put the canoe on the roof of my vehicle by myself. I'm gonna show you right now.

I first lean it up here. If you have a brand new vehicle you might want to put a little bit of a bumper here so you don't scratch your vehicle. It's like a lean-to and I start with that, then lift and slide the boat onto the rack.

I have a two-canoe rack system meaning I can put two canoes side-by-side if I want. It's great except when you hit your head on it when you get out of the car. I'm not using two canoes tomorrow, I'm just using this one, so I'm going to slide this over completely to a side before I tie it down. Why not in the middle? I want something to brace it, I also don't want it in front of me while I'm driving. I just like it on to the right some people like it on the left, some people like in the middle. I find if I put it in the middle, it will loosen up a bit after a while when it gets windy on the highway. So yeah, up to the side, away from the driver's view is my preferred.

Right now I’m going to tie it off. I use straps for the top, but you can use ropes if you want and if you don't have straps. I just like straps because they are easy. If you do use ropes, you have to learn how to do what's called the “trucker's hitch.” I'm going to show you that in a minute.  I use that for the back and front but I just like strapping the center down on the top with straps. Straps last quite a while too, I think I got straps in the mid-90s, the one key thing too is you don't want the part where the strap is going through on the rack be too high or too low, you want it about right in the middle. It gives you more tension because eventually on the highway this thing is going to loosen up a bit so you want to get out and then pull it back down again. Put it here and put it here it will loosen quicker, I don't know why it does.

Alright, now I'm going to tie the back. Each vehicle is different where you’re gonna tie down. I'm lucky on this vehicle because I've got two holes underneath the middle bar here so I use those. Sometimes you have to go under and lower and sometimes you have to create something. Hopefully you've got somewhere to tie down something solid to it. Use rope that doesn't stretch, parachute or static cord. Don't go cheap on rope, you don't want it to stretch because if it stretches that that's going to loosen after a while and you’ll have to retie it again.

So for the trucker's hitch, make a loop, put the bunny ear through the loop, and do it one more time so it doesn't slip on you. Feed this through the loop and that's gonna be tight. Use a slip knot to hold it. Okay so if you have to retighten it when you're driving and it gets loose, that's why the trucker's hitch is awesome. You'll use this knot a lot. Now on the front I have straps, they're bolted down on the bumper. You can buy these or you can make these, but basically all cars have holes along the side here and just put a bolt in. I use the fisherman's knot basically, it twists the snake around the tree about six times snake head through the hole, just like tying a hook to the line. So don't do the trucker's hitch down low or don't do it too high, do it in between so that it gives a good leverage. You’ll know what I mean when you start practicing.

That's how I put a canoe on my vehicle by myself and I take it off the exact opposite way. You really do need front and back ropes with ropes over the horse straps and over the top as well, because the canoe’s gonna move in the wind, especially on the highway. You want to hold the two ends down, it helps a lot. So take your time and do the black tie, the front tie and the top ties and you shouldn't have a problem! 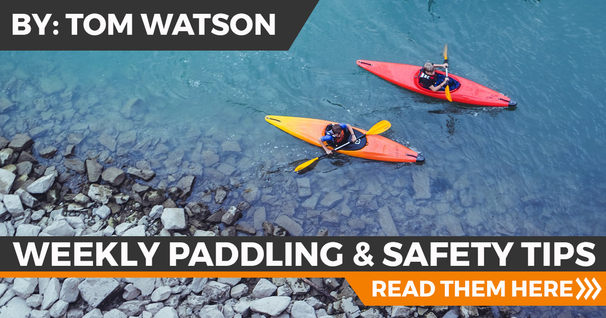