Hi, Jeff Little here. I'm the regional Pro Staff director for the Wilderness Systems Fishing Team. I'm here with fellow pro-staffer Callie Shumway and in this paddling.com video, we're going to cover how to choose the right kayak for your fishery.

Kayak fishing offers an endless variety of species and a diverse array of places to catch them. Make sure you ask yourself the right questions. Make sure you correctly match the kayak to your specific fishery needs. With so many choices of fishing kayaks on the market today, it's important to narrow down your choices in terms of really two things. You're going to look at the length of your kayak and also the width. We're going to start here with Callie in her boat. This is a Wilderness Systems Tarpon 100. Go ahead and tell us, Callie, some of the waters that you're fishing.

Callie Shumway:
I mostly have fished rivers, when I was first trying to figure out what kind of kayak I wanted. I'm a small angler, so I decided to go with this kayak because it's a 10-foot, and it's easy to maneuver in the river. And I also like it because it's only about 55 pounds for the weight. So for transporting, carrying it by myself, it's a lot easier. And also, for my truck, I have a 6-foot bed, and I wanted a kayak that was a little bit shorter and easy to just put into any vehicle.

Jeff Little:
Great, so as we have these kayaks laid out here, they're in increasing length. And basically the shorter kayaks are going to be much more maneuverable as you move toward the end. There I have a Tarpon 140. I have that out on the bay. That's going to be a much faster kayak. But let's go one-by-one.

You can do the same thing with a little bit lighter package. If you move to the... this boat is a Commander 120, also a very good boat to stand up in, but also similar to her 10-foot boat, this is 11 and a half, we're moving to a 12-foot boat. It's getting a little bit faster, but also plenty maneuverable. This 12-foot sit-on-top is in the middle of our lineup, and it's a good blend of both speed and maneuverability.

Next we have a Wilderness Systems Ride 135. We're getting a little bit longer, and we're increasing in speed. But we also have a nice wide kayak, so it is good for those standing applications. Certainly our most popular fishing kayaks are the sit-on-tops, which is nice because they're self- bailing.

But let's not overlook sit-in kayaks. Reason you might want to go with a sit-in kayak for kayak fishing is because there's just less plastic here, which makes it a lightweight kayak. And that gives you extra speed. This is a 14-foot. It's a Pungo 140. It's a very fast boat on the water.

The last boat in our lineup, this is my boat that I had out on the Chesapeake Bay three days ago catching rockfish. It's a Tarpon 140. I'm actually anxiously awaiting the delivery of the Tarpon 160, a 16-foot sit-on-top kayak. And really the advantage of these boats, these longer, skinnier, narrower boats, is that they're faster.

Now not everyone needs to go fast, but out on the Chesapeake Bay, or even in salt water applications in the oceans or larger reservoirs, speed is a real advantage. In my case, I was working schools of fish that would pop up, and you could see all the birds in the distance working them from the top, and I knew that there were Striped Bass underneath them. So they'd pop up in one area, I had to get on them really quick.

There are four key questions you want to ask yourself when you're choosing a kayak, with the first being capacity. Capacity refers to the angler's size, how much gear you're going to be taking with you. And for me personally with this Tarpon 100... I'm a small person, and it's a 10-foot boat, and for the capacity, I don't really carry that much stuff. I'm pretty much a minimalist. I usually have a backpack with my gear and my rods. And with these hatches, you can usually store other stuff in it too.

Next question you want to ask yourself is, "How maneuverable do I need to be?" Now out on the Chesapeake Bay, I don't need to be that maneuverable, so I'm using a much longer boat that isn't maneuverable. Whereas Callie in her Tarpon 100, she's on a river that has some class 1, 2, or 3 rapids. She really needs that maneuverability, chooses a shorter kayak.

Last question you're going to ask yourself, "How fast do I need to go?" Now if your fisher is one of a lot of expansive of open water, like salt water, or larger reservoir, you're going to want a longer, skinnier kayak, like the one I'm in right now.

One of that smartest things you can do before making a kayak purchase is to attend a demo day where you can test paddles and kayaks.

Until next time, I'm Jeff Little with Wilderness Systems Kayaks wishing you more time with your line in the water. 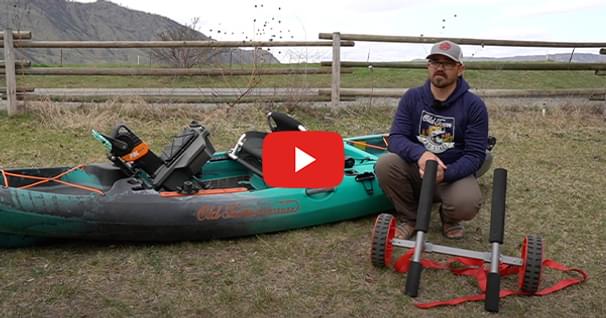 A Guide to Fishing Kayak Carts

Tyler Hicks, brand ambassador for Old Town Canoe and Kayaks, shares some tips on how to choose a kayak… 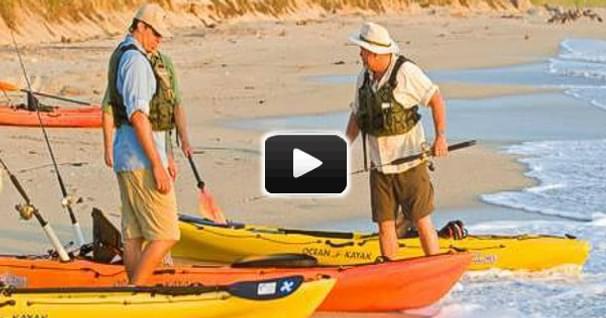 If you're trying to decide on a kayak, there's two questions that you have to ask yourself: HOW and…