I often get ideas for these articles by watching fishing shows on TV. Once in a great while, there will be a gem hidden beneath the sponsorship and riveting dialog. For the most part, I watch these shows while I have the TV on "mute".

But recently I was watching one of my favorite shows (one that I actually listen to), and stumbled on one of those gems, made possible by an accident that happened while the cameras were rolling.

They had a great day of fishing, perfect conditions; all was well in the world. They're releasing the last fish of the day, prepped to thank me for watching and then give me a sneak peek at next week's show, when it happened. As the host was attempting to release the fish it did a head-shake freeing itself but impaling him.

So, while the cameras were rolling, the two anglers performed the hook removal. So, I thought that human hook removal would be a great topic for an article.

I did a little online research using "fish hook removal hand" for keywords. I found plenty of articles and videos that go in to more detail than you can imagine about the process. No need to re-invent the wheel. However, the close-up pictures I found made me become very aware of how dangerous fish hooks can be. And, I'm not just speaking about the puncture wound that results when you become hooked.

I fish primarily with hardbait lures, which means lots of treble hooks. I fish saltwater, which means "rust happens". I also believe that even a rusty hook will be strong enough to hold most fish that I'm likely to encounter, simply because the fish will probably be hooked by more than one hook. I've always heard that if you leave a hook in a fish that it will eventually rust away, and the fish will still survive. However, I don't think humans would fare as well under similar conditions. What do you think?

This is one of my favorite lures to throw and, up until I saw that fishing show, I never thought twice about slinging this thing by my head, time after time. It's a $6 lure, so I'm not crazy about replacing the entire lure if I don't have to.

So now, the focus of this article is replacing old rusty hooks. A great pastime for winter cabin fever or whenever your offseason may be.

Before you start swapping out those nasty hooks, you'll need some tools:

Don't scrimp on these tools. You'll be working in tight quarters with very sharp hooks, so your grip should be firm and steady. I use the end cutters to snip the old hook at the eye. I use the vice grips to grab the new hook firmly during installation. The "O" ring pliers are probably the most critical tool. Opening that "O" ring can be quite a challenge, so make sure these pliers are of good quality. The "O" ring pliers I currently have are very cheap and flimsy. I'm on the hunt for some that are a lot better. NOTE: Reading glasses also help.

I know a number of anglers that replace original (OEM) hooks on lures with stronger hooks before they ever hit the water. My personal stance is this: The lure company did their R & D using their own hooks. So, if you want the lure to function as it was intended, then it's probably best to keep the lure as it was original manufactured.

I'm lucky in the fact that I really enjoy using L&S MirroLures, and these lures are built about 15 minutes from my house. So, a phone call is all it takes to get new lures (sometimes before stores get them) and replacement parts. I made the call, took the drive, picked up some replacement hooks and "O" rings. Once I got them home, I couldn't resist the before-after picture.

I removed that one hook for the photo-op by opening the "O" ring and sliding it around, but for the rest of the hooks I simply cut them off at the eye. The hook replacement process is something I'm sure you're already familiar with, so I won't bore you with that. Just be careful, because you don't want to be doing that "fish hook removal hand" internet search out of necessity.

I actually replaced hooks on a number of lures while I was at it. After removing the old hooks, I took the lures in the house and gave them a scrub. They looked good as new. I didn't replace the "O" rings because they didn't look too bad, and because my cheapo "O" ring pliers made it difficult. However, the finished product turned out pretty nice.

How many times have you heard that one? It's true. I have a tiny collection of lures that I like to use. I tend to stick with the same lures, in the same colors, trip after trip. Yet, I'm drawn to things shiny and new. Heck, when I went to get those replacement parts at MirroLure I came out with even more lures. So me being "caught" by a lure is true as a figure of speech, but that still made me consider what happens if I really do get hooked. Another phrase you've probably heard is "pinch down those barbs".

I don't care how good your technique is, extracting a hook that is buried in you past the barb is not going to be fun. Remember, the barb is engineered to impede the very function you now need to perform.

Now is when you need the needle nose pliers to mash down those barbs. No rocket science involved, just crimp them down.

Make no mistake, getting this hook buried in you barb-deep would still hurt. But after looking at this close-up versus those hook removal videos on YouTube, I'm convinced - pinch down those barbs and the hook removal becomes much easier and less painful. And, if you're practicing "catch and release" fishing, then do yourself a favor to make the "release" part a little easier. I'm also convinced that since my lure will most likely still hook the fish with more than one point, chances are good that if I maintain constant pressure during the battle, my odds of getting the fish boat side doesn't diminish much.

As I mentioned before, "rust happens". And, it's a lot like the aging process - all you can really do is slow it down. So preventing rust ain't happening. The best you can do is try to slow it down. But first, it's time for your daily chemistry lesson. Rust or "oxidation" is formed when certain metals react to the moisture in the air. So, metals that easily rust are often coated or "plated" in hopes of stopping oxidation. The sodium found in saltwater is a catalyst which accelerates the oxidation process. So in order to slow down the oxidation process, you simply must remove those things that make oxidation occur in the first place.

Since salt is the catalyst in this chemistry experiment, we need to remove it the best we can. Remove this catalyst by rinsing the lure and hooks with fresh water. I often carry a small garden sprayer loaded with fresh water just for this purpose. As I use lures during the course of a day I keep them separated from other lures so the salt and moisture don't cross contaminate the dry lures. Then, once I'm all loaded to go home, I'll rinse everything off. You can use bottled water or melted ice from the cooler as well, but the goal here is to remove the salt.

If I have a number of lures to dry off at the end of the day, I'll normally just lay them out in the bed of the truck after I rinse them off. They should be dry by the time I get home. If I'm just cleaning up after a quick fishing trip at lunch where only one lure is involved, I perform the "windmill maneuver". This is nothing more than letting out about 3' feet of line and spinning the lure around over my head. This slings off the salt water and also dries the lure. It also keeps tourists from walking up and saying "catching anything"? Well, that's only partially true. It prevents additional tourists from coming up and asking the same question.

As you may be able to see on the OEM hook pictures, the plating appears to have been applied after the hook is sharpened, thus protecting the hook from chemical intrusion. Hooks become dull over time and will need to be sharpened. But just keep in mind that once you break the seal by sharpening the hook and exposing the bare metal, you open the doors to an oxidation party on the business end of your lure. Start making plans to replace those hooks soon.

Chemistry class dismissed... Alton Brown would be so proud.

Now before you ask (and I know you will), let me tell you a bit about the "backdrop" I used for several of the pictures found in this article. No, not the beer box - the other one. Art manifests itself in strange forms sometimes, and it's true that beauty is in the eye of the beholder. Behold this - the "Golden Throne":

I rescued this from a home that my daughter and her husband purchased. It's not actually being used in our home, since BedBath & Beyond really doesn't make many accessories to match this anymore (and that's sad). But, it is hanging in a place of prominence in my garage. 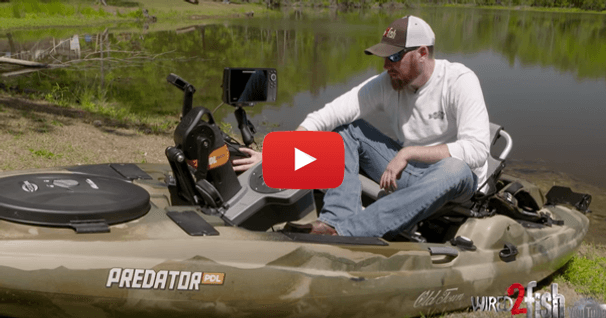 How to Add a Fish Finder to Your Kayak

Looking to step up your kayak fishing game? Check out how to add a fish finder to your YAK and soon… 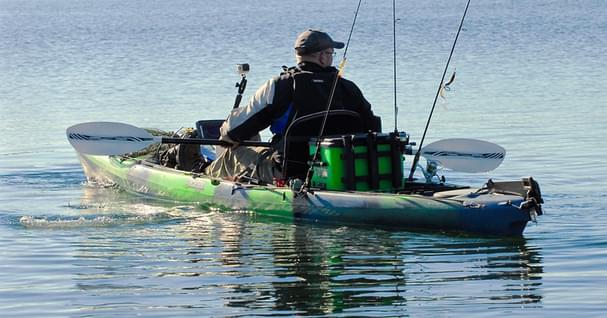