I just got back from my "end of the season" paddle, which ended up this year to be in Ontario's Killarney Provincial Park. I usually choose to go solo on my last outing of the year. But this time I decided to ask along three other members: Andy Baxter, his Golden Retriever named Monty, and my hyper Springer Spaniel named Bailey. Andy and I knew we would get along on the trip. We've been paddling together for years. But we weren't sure about Monty and Bailey. Both were canoe dogs who had experienced quite a few canoe trips. But they hadn't traveled together before and Andy and I were a little anxious about squeezing them in the canoe side-by-side, amoungst a pile of gear. Thankfully both dogs got along. In fact, they complimented one another quite well. Bailey successfully chased the camp mice away from Monty, and Monty retrieved fetching sticks for Bailey. Both dogs even saved Andy and I from getting lost during a day hike. We had decided to go ridge hiking and on our return trip back to the canoe Andy and I found "confused" on the direction to take. If it wasn't for Monty and Bailey leading the way we'd still be walking the ridges of Killarney. 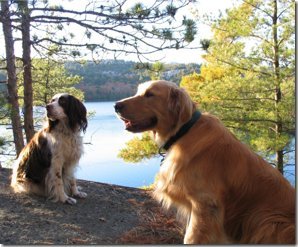 Dogs are a strange breed. Some are well behaved and considerate, while others are just a plain nuisance, which is why the question of having them join you on a camping trip is not all that cut and dry. Much of it depends on the actions of the owners themselves. I witnessed someone's beagle harass a cow moose by leaping out of the canoe and swim after the poor beast. Half my food pack was once consumed by a golden retriever at the take-out of a portage. At a public campground I saw a poodle, which was leashed to a tree during the night, torn apart by a pack of coyotes. I had the displeasure if mistaking an over friendly and unleashed black lab for a marauding black bear. And more than once I've set my tent on top a mound of fresh dog doo-doo and didn't realize it until I packed up the next day. I blame these incidents, not on the dogs, but on the owners themselves. Quite honestly they have no business having a pet in the first place, let alone bring them along on a camping trip.

My wife and I have been tripping with our Springer spaniel, Bailey, for six years now and believe that the golden rule is to take responsibility over the dog's actions. Things like chasing animals or leaving feces behind on a campsite is normal dog behavior. But having the owners allow them to conduct in such a way is not. When we first took Bailey camping, Alana and I made sure she was always with us and was never allowed to wander off. We even leashed her while on busy portages or hiking trails. It wasn't easy training her. Bailey simply loves being off the lead. But by using stern commands (and a few treats) our dog learned never to leave our side. Now she's better trained while on a canoe or hiking trip than she is at home. It's all a routine for her now - staying still while in the canoe, heeling the moment we spot an animal or bird, heading off the trail to relieve herself, not complaining about having her PFD put on before we run a dangerous set of rapids, waiting for her dog pack to be strapped on before heading down the portage.

We've also built up a routine of watching over Bailey, generally because she doesn't always look after herself. A trip to the vet is always planned before we head out to make sure her shots are up-to-date and she's in good overall health. We pack a first-aid kit specifically designed for dogs. Bailey's regular choke collar is replaced with a glow-in-the-dark nylon collar. I've glued a slab of foam padding on the bottom of the canoe for her to sit on (this gives her a place to call her own and helps to control her while in the boat). I've even attached an umbrella holder on the gunwale to give Bailey some shade while we paddle across a large lake. And rather than put bug repellent directly on her skin, which she'll definitely lick off and make herself sick later on, I'll spray it on a bandana which we tie around her neck. The bandana also helps other campers identify her as a dog and not a bear if they accidentally run into her on the trail.

Speaking of bears, we also don't assume Bailey will keep us safe from them. I know a lot of people who have brought dogs out with them for that specific reason. It's true the bear will most likely think twice about coming into a camp with a dog barking. However, a bear once wandered into our campsite because of Bailey's constant whimpering. It thought she would be an easy meal I guess. I guarantee that if the bear ever went for Bailey, our dog's instant reaction would be to run right towards us - bringing the bear along with her. 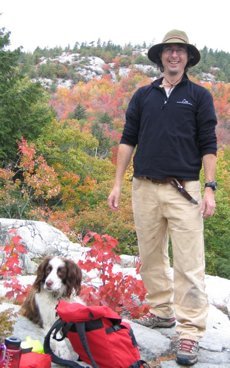 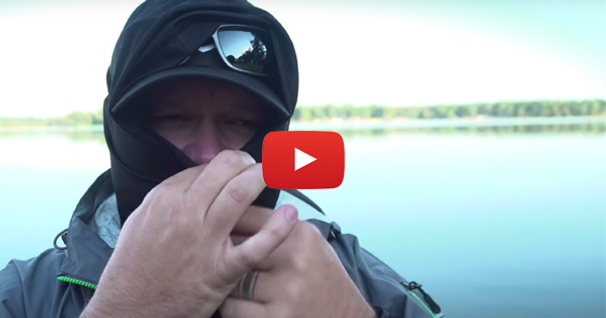 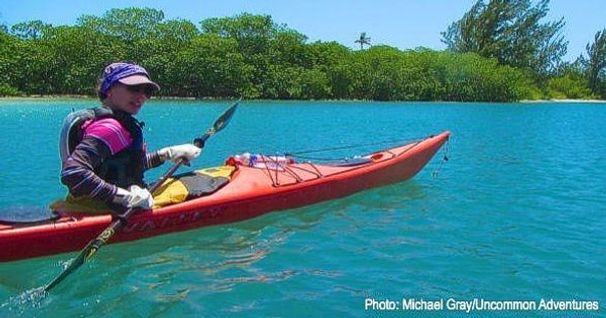 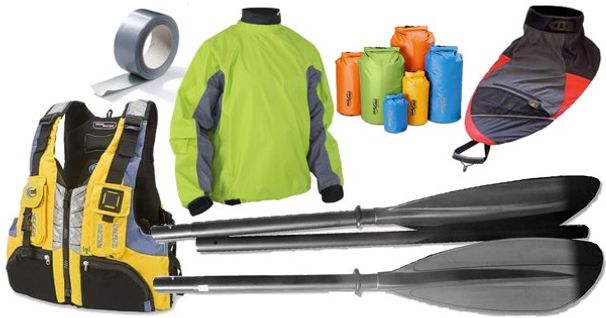