Have you looked through an outdoor gear catalog recently? We are a highly specialized society – even down to our camping gear accessories. Not that this is a bad thing – its good to know we have choices when it comes to certain equipment. Take first aid kits for example.

Used to be that we'd toss in a few adhesive bandage strips, add a bottle of iodine, grab some alcohol swaps, and drop a few aspirin into a film canister and we'd have our kit. Today we can get kits comprised of supplies designed to treat injuries common to certain activities. There are "bike touring" first aid kits, and backcountry trekking kits; you name the activity and someone has developed a kit specifically appointed to attend to anticipated injuries.

This is not a bad thing. With the costs of products these days, why buy a kit that won't have the kinds of patches and pads and ointments you'll likely need for the particular side step stumble into harm's way you might wander? Rock climbing and bicycling might require more pads and salves to treat abrasions, where a deep woods scrambling kit might offer first aid items for scratches and blisters and bites.

Still there are times when you have to make do without the proper item. Sometimes a first responder won't even have access to a basic kit. A resourceful first aid giver can utilize items at hand to supplement a well-appointed first aid kit. Here are some ways in which we can utilize dual-purpose gear or improvise multiple uses from items typically carried along on a backcountry adventure.

Like any life-saving skill, try to learn as much as you can through courses or good reference books. Many applications of first aid require knowledge, not materials, to be a valuable treatment. The treatment for shock isn't carried in a kit, but rather given through the knowledge of identifying the condition in the field and being able to act accordingly (Treatment: lie on back, feet raised slightly, keep warm if conscious; lie on side or stomach, do not raise feet/legs, keep warm if unconscious). The trauma of a broken or injured spine or neck requires know-how when it comes to moving (or not moving) a person. What do you have at hand to immobilize the victim's neck? (Parts of a PFD could make an adequate cervical collar). 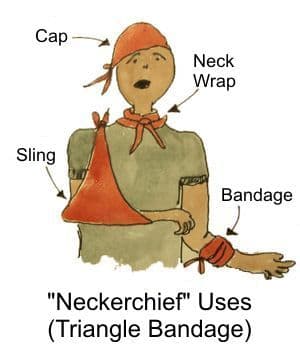 Swelling and bleeding are two common results of common injuries in almost every outdoor activity. Who hasn't scrapped a shin awkwardly exiting a capsizing canoe or during an ill-attempted slippery rocky shore landing. A spacious and thick compress may be ideal, but a handful of sphagnum moss may have to do. Do you know what this moss even looks like? How would you hold it firmly to the wound with enough pressure to stop bleeding? When I was in Boy Scouts one of my most versatile first aid tools was the BSA neckerchief we wore as part of our uniform. Many first aid kits carry a similar item – referred to as a triangular bandage. It's great for securing compresses (commercial or otherwise) to a wound. Cool mud or water-soaked moss can be used as a cold compress against swelling – all the while being held in place by the tri-bandage.

When thought of in terms of multiple uses, that large triangle could be configured into a skull cap-like hat to help keep your ears warm (stuff some grass or fluffy cattail head under it for insulation). If you've thought ahead and bought a bandana in a bright color (yea, I know, the camo' one is going to look way cooler!), it can be tied to hold a sprained ankle in place, too. And... you've just added one more flag signaling item to your camp gear. 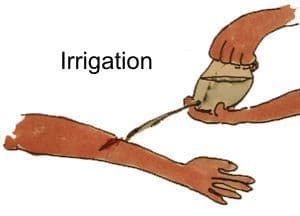 Most wounds need to be cleaned out, some even scrubbed if embedded with gravel and minute road grit. You could waste a lot of water trying to direct a large stream onto a wound. You could waste equal time hoping that a light flow will be strong enough to wash debris away. How many of us even know that the little syringe in the first aid kit is a wound irrigator anyway? Here's where a plastic storage bag comes to the rescue.

I carry storage bags along for myriad uses. Once partially filled with sterile water (when available or timely to process), the plastic bag can be compressed and carefully punctured near a lower corner to produce a steady, concentrated stream of water that can be accurately directed at an open wound. I keep small compresses and bandages in a plastic bag so as to have it always handy.

Sometimes our first aid kits just don't have a specific treatment – how many different medicines or ointments can you carry? Take insect stings. There are many bite treatments on the market – but what works for bees may not even work for wasps. A cool compress of mud will oftentimes ease the pain and swelling of such bites. Bee venom is acidic; wasps are alkaline. Use a paste of baking soda for the bees, and vinegar or lemon juice for wasps.

Securing a broken leg with canoe paddles, branches, or other rigid supports are pretty commonplace treatments for such injuries. Don't overlook a folded panel cut from a PFD in time of need. Maybe a panel from a backpack would work when doubled over. If you have the luxury of several sizes of SAM splints you may be covered. Perhaps you might carry one larger one that can be cut down for smaller appendage size breaks? Even larger charts can be folded over to make a rigid sleeve. That triangle bandage comes in handy as a sling, too.

One of the best places to find emergency first aid items is within kitchen/cooking supplies. Besides the baking soda/lemon juice for stings mentioned above, meat tenderizer is said to help minimize the itch of many insect bites. Think about a pinch of table salt added to the water to be offered to someone being treated for heat exhaustion. Ancient remedies for warding off infection were the applications of sugar or honey to open wounds.

Mother Nature has been offering natural medications in her garden since the beginning of time. Learning some of the more common remedies (for many of the more common ailments) can only make you even more first responder savvy. The hardest part is learning to identify these plants. It can help if you are also learning the ones to avoid at the same time. Ironically, a plant whose sticky juice counters the irritation of poison ivy – called jewelweed – happens to grow in the same general vicinity as the evil ivy.

Other plants whose medicinal qualities are legend (at least among backwoods people and many native Americans) include:

It may make sense to carry a plant guide in your first aid kit. (Hint: If the second part of the Latin name for a plant is listed as "officinale" as in Taraxacum officinale (dandelions) it means this plant was at one time officially considered a medicinal remedy for several ailments).

Clearly first aid is a complex system of treatments that require knowledge of symptoms, affects and remedies that can't be adequately covered in a short article. If you are serious about enjoying the outdoors responsibly, make it a point of taking a wilderness first aid course, or First Responder training. There are many good first aid instruction manuals out there as well as reference books on natural treatments and remedies. Take the time to be a knowledgeable outdoors person. 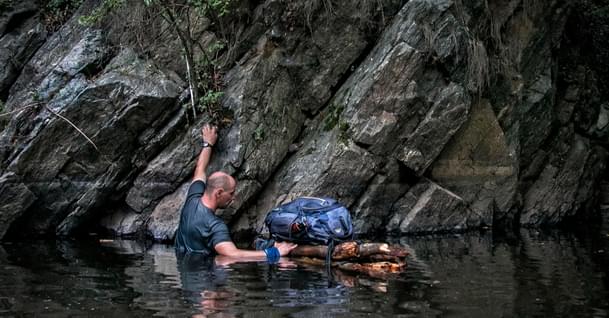