Delinquents In The Bush

It was nearly midnight when I heard the clanging of their canoe. Two clean-shaven men -- correction, "boys"-- unhappily stepped out of the beached Grumman and with mild profanity, ambled up the trail into the bright light of our cheery campfire.

"Hey, man, you got a map?" demanded a powerfully built tow-headed boy of about 16. "Cool it, Chad," said his friend. "What he means, sir, is that we lost our map and can't find the portage out here."

"I see," said I, and scientifically placed another log on the glowing blaze, while the eight teenagers in my crew quizzically looked on. "Why don't you guys have some cocoa and popcorn and tell us all about it." I suggested.

"Uh, thanks," muttered the smaller of the two--a dark haired lad, who said his name was Jeremy.

According to their story, the boys were part of a church group that was camped on Mora Lake (Boundary Waters Canoe Area) which was just to the east of our camp on LIttle Saganaga Lake. They had gone canoeing after supper and "just for fun," portaged into Little Sag. When darkness fell, they became confused and paddled around till they saw our fire.

I knew that no responsible leader would permit kids to go out at night without a map, compass and flashlight, let alone portage into another lake, so I pressed for details. Jeremy was quicker tongued than Chad and had ready answers. He said they had lost their map on the portage. And their flashlight had gotten wet and didn't work.

"You guys have life jackets?" I queried, knowing full well this was "essential equipment". Chad looked expectantly at Jeremy who, with some uneasiness replied: "Uh, they're in the canoe. Yeah, we left 'em in the canoe."

I peered over the embankment and shined my flashlight into the belly of the Grumman. "I don't see any," I said with doubtful concern.

"Yeah, well, we stuffed 'em under the seats so they wouldn't get dirty," quipped Jeremy, with a dead pan expression.

"Whatever," I weakly nodded, suspecting there was much more to the story than was being told.

The boys accepted our offer of hot chocolate and popcorn, then pressed me again for a map. I showed them our location and said I had no extra maps to spare. Besides, Little Saganaga Lake is a complicated mass of islands, bays and arms. Experienced navigators have trouble finding their way around it in daylight. Only an expert would try it at night! It was obvious these boys had no backwoods skills, so I suggested that they stay with us until morning then search out their group.

But the pair was adamant that they must get going. I looked at my watch: it was nearly one. We'd come the full length of the Frost River that day and would lay over in camp tomorrow. We planned to sleep till ten then prepare a leisurely pancake breakfast, after which we'd swim, fish and just lay around. We were still keyed high with the excitement of a challenging day and no one was very tired. It was a beautiful moon-lit night and my crew had never canoed after dark, so I asked if anyone wanted to paddle to the portage. A few said yes, so I agreed to guide the boys to Mora Lake.

Twenty minutes later, we came to the 44 rod (one rod = 16.5 feet) portage that led to Mora Lake. I showed the boys where they were on the map, then gave them a candle and some matches so they could light their way across the trail. We shook hands and I wished them good luck.

Two days later, we left our campsite on Little Saganaga Lake and paddled north through Gabimichigami, Agamok and Mueller Lakes, into sprawling Ogishkemuncie. It was on the "Ogish" portage that I met the "church group" to which the boys said they belonged. A boy of about 16 had just dropped his Grumman canoe full bore on a jutting rock and was being reprimanded by the leader. The kid swore at him and was punished with an hour's worth of chopping wood. I looked at the barely dented Grumman: it bore the logo of a well known Minnesota camp for juvenile delinquents. I thought about the ill-mannered boys who bothered us two nights before. Could it be? Hmmm.... I approached the leader and introduced myself.

Seconds later, everything became crystal clear. The leader said the boys had been a problem from the start. They hated the woods and fought the "required experience" with every breath. By the third day of the canoe trip their whining and uncooperation had earned them so many hours of camp chores, that they had no free time at all. The camp is structured so that violators must complete their sentenced jail time and pay all accrued "chore penalties" before they are released to society. The boys figured the best way out of the work--and the wilderness--was to paddle out. So they waited till everyone was asleep, then they stole a canoe and paddled off into the night.

They had lied about everything, even their names. They were actually camped on Elton Lake, about a mile from our campsite on Little Saganaga. The boys knew their crew was looping back to the Gunflint trail via Gabimichigami and Ogishkemuncie Lakes, so they decided to head off in the opposite direction--towards Mora Lake, with hopes of hitting a road or trail they could follow back to civilization. All they knew was they "wanted out" of the woods. Beyond this, they probably had no plan.

The leader did not seem particularly concerned about the breakout: he was sure the pair would be apprehended in a day or two. However, he was mildly ticked that the little criminals had stolen his wallet with 34 dollars in it. Then he grinned broadly and added that "...but the idiots have no map or compass. They didn't even take any food! Probably figured they could buy it along the way," he chuckled. The man was certain the wilderness would teach them a lesson they would never forget.

About a year later, I saw the leader at a canoe event in Minneapolis and asked him for the rest of the story. Seems that the boys became lost on Mora Lake and paddled around for hours in search of the portage. When they couldn't find it, they gave up in disgust and struck out overland, first taking care to pull their canoe into the woods where it wouldn't be seen. For two days, they wandered aimlessly in the forest with hopes of coming upon a road or house. But all they saw was tree after tree and hordes of hungry mosquitoes. They had no food or water or any idea where they were. After two days of wandering around in the bush, they were ready to surrender--that is, if they could find someone to surrender to!

Around noon on the third day, they emerged at the shores of Gillis Lake, where they waived down some passing canoeists and poured out their story. The kids pleaded with the canoeists to take them out, and promised they would cause no trouble. But the people were afraid of them (they must have looked awful!) and refused to come ashore. Instead, they told the boys to stay put-- they would send help the next day when they reached the trail head. Then, they tossed them some peanut butter and crackers, hard candy and powdered pistachio pudding, and paddled away.

The leader told me the kids cheered when the authorities arrived and gave them no trouble at all. They were model citizens when they returned to camp, and they stayed that way for the duration of their term.

"Did you recover your wallet?" I asked. "Yes," he beamed. "And the 34 dollars too. I think the kids discovered the real value of money on this trip!"

A decade later, I saw the leader again and asked him if he'd heard anything about "Chad" and "Jeremy". "Matter-of-fact, no," he drawled with a smile. "But in my business that's good news !" 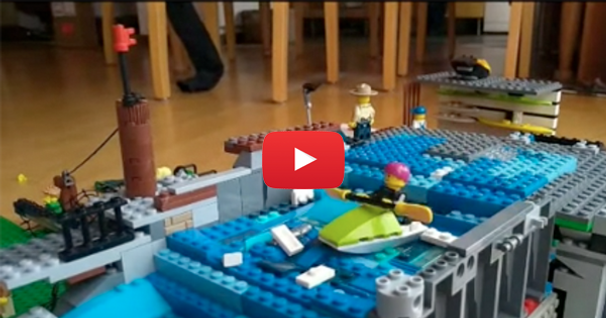 This is what happens when you haven't been kayaking in weeks and you're stuck indoors. Enjoy the Lego… 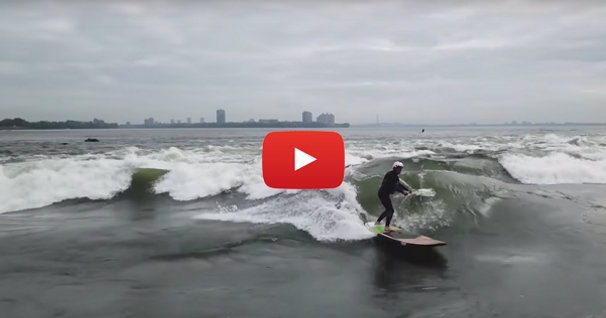 Stand Up Paddleboarding and Surfing in Montréal

In this episode of Paddle Tales, we're exploring the beautiful and fun city of Montréal. Located on the… Man Catches Marlin on a SUP

Watch as an Australian man catches a marlin from a SUP (yes, you read that right... a SUP). Watch… 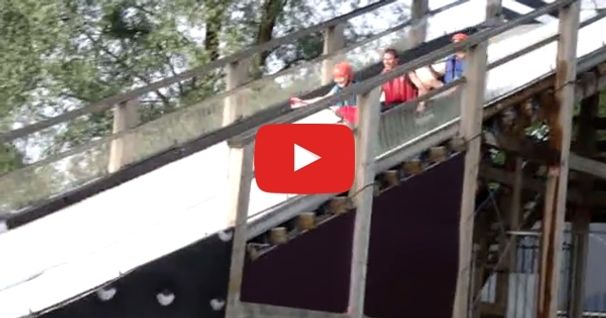 What happens when you take a 3-person canoe down a whitewater kayak ramp? Let's just say this canoe is…