OK, I had the disc removed in mid-July. My doctor gave me the news I'd been waiting for in late August. That news was that I had his blessing to "resume normal activities". The doctor knows his business, no doubt. But he doesn't know me. My wife however, knows me. So, she and I made a deal. Even though I had the green light from the doc, I'll treat this news as a yellow light until I've eased back in to some of my "not so normal" activities - kayaking being one of them. First day back in the water, in my new boat, was slated for Sunday, Sept 21. The trip would be short in duration (99 minutes), at a familiar spot, with minimal gear. But, I'd be back on the water. Whoopi-ty-aye-oh - Let's go!

OVER PREPARATION: The day before, I washed off the boats, readied the PFD's, paddles, installed the seats, and loaded the boats in the back of the truck. All we needed to do on Sunday morning was grab the rods and go. I decided since this was only going to be a short outing that'd I take minimal gear, only 3 rods. My new boat has a center hatch, perfect for some gear. I only took what would fit through that hatch. That was a lip-gripper, some pliers, and 2 small tackle trays. Problem is, I had those 2 trays stuffed with enough lures to fill 5 trays. As a result, much of my time was spent untangling the lures I wanted from the lures I didn't need. Still, I'm glad I had all of that stuff because it was good to mess with my stuff on the water instead of in my garage. Women have purses. Guys have trucks, garages, and tackle trays.

CASTING FROM THE COUCH: For many months now (probably 5) I either abstained from fishing, or fished for very brief periods from shore. But after months of inactivity, fishing from the seated position was a new challenge, again. Luckily I didn't have the opportunity (or necessity) to make any precise casts, because I did well to hit the water around me. I spent a good bit of my day "monkey fishing". Translated, I caught several species that day, including red mangrove and pepper … trees. So, I switched to a weedless/treeless jerkbait, and continued practicing my casts. At least the monkeys would give my lure back when I bounced it of their front door.

THE 99 MINUTE OUTING: I normally plan to be on the water for only a few hours, staying through the best fishing period, and then returning to the launch. More often than not, that plan spirals out of control and I want to stay all day. My wife, knowing this story too well, wisely advised we keep this initial outing a short one, in hopes that I wouldn't do harm to myself. So, she was the official time keeper. She was armed with a timer I had picked up at a Dollar-Tree, which has a maximum time setting of 99 minutes. Once we got on the water, she started the timer. She went exploring, stopping occasionally to give me updates on fish movement and also rescuing my lures from the mangrove monkeys. To be honest, I was pretty much done for the day before the beeping started. But, the trip ended shortly after the beeps, and we were home in time for the 1 pm kick-offs.

TIME TO HIT THE TREADMILL: For about 3 months prior to the surgery, I was strongly advised to take it easy. I did. No fishing, kayaking, mowing the yard, no heavy lifting, nothing that might injure that precious nerve. Then there was major surgery. Then a couple more months of taking it easy. So, add it all up and for about 6 months I was dormant. At the end of my paddle, I was drained. Nothing hurt, but man was I tired. This was a warning that I needed to get back in shape. Not 'go run a marathon' shape, but certainly 'go paddle for 4 hours' shape. Fall in Florida means lots of great fishing, so I'll be hitting the treadmill in order to be ready for it. 30 minutes a day (or the duration of one pre-recorded fishing show) will make a lot of difference.

BACK WITH THE PADDLE AGAIN: But at the end of the day, after the gear was rinsed off and the boats were put away, it was scored as great day. I guess I know now how the cowboys of the wild west must have felt. Riding the range on their trusty steeds, being one on one with nature, even if they didn't have a GPS. I digress. But, what good cowboy story ends without a song? This will be no exception. I tip my ten gallon hat (with a pocket for my fishing license) to Gene Autry. 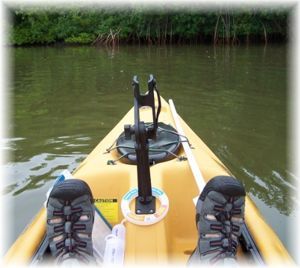 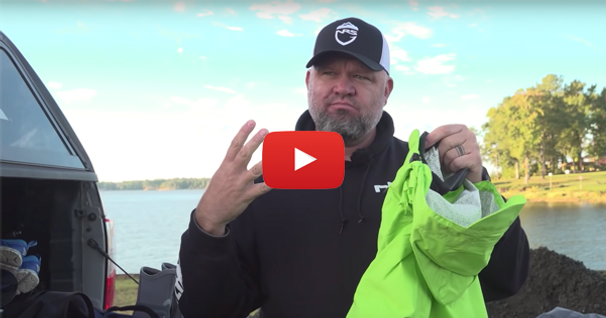 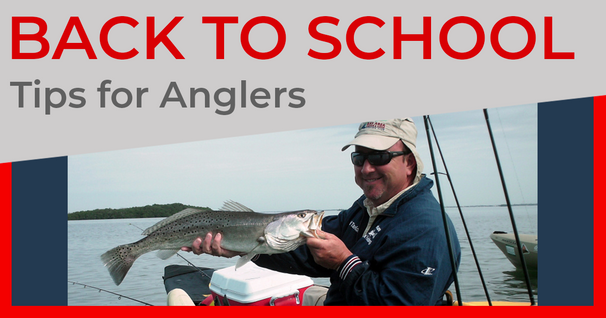 Back to School for Anglers

Normally, I close my articles with a quote. I still will, but this time I'd like to start with…