August 31, 2019 was shaping up as an unforgettable day even before kayak angler Adam Irino got steamrolled by a motorboat and caught the biggest fish of his life.

Adam and two friends launched their kayaks early that morning from Rockaway Beach, a few miles south of San Francisco. As the sun crept over the horizon they were already offshore, following a pod of Pacific Grey Whales to schools of anchovy. As the whales gulped the little silver fish by the ton, Adam and his friends each pulled up a handful to use as live bait, then headed for deeper water.

The salmon run had started to tail off, and the boys were determined to land a few of the hard-fighting and delicious fish before the season closed. The fishing started slow, but the morning was nonetheless full of memorable moments.

Earlier, the whales had breached so close that Adam and his friends could smell the baitfish on their breath when they spouted. Then a coconut floated by and Adam hauled it aboard. The husk was neatly shaved with a machete, marking it as an escapee from a suburban grocery store rather than a coconut that fell from a palm tree on some distant Pacific shore. Strange, he thought. But things were about to get a lot stranger.

Trolling for salmon is hard work in a kayak, especially when they’re not biting. By midmorning the crew had moved to Plan B, hunkering down to target rockfish. They joined a loose flotilla of kayakers about half a mile offshore from a popular dinghy launch.


That’s where Adam reckons the skiff came from. He spotted the little outboard from a few hundred yards away, and went back to tying jigs. When he glanced up a moment later it was almost on top of him.

“He was bee-lining straight at me,” Adam said. “I couldn’t see the driver so I figured he didn’t know I was there.”

He hollered and waved, and the boat kept coming. In the video from Adam’s kayak we see him lean forward and jam on the pedals, getting in seven hard strokes before the motorboat fills the frame. That was just enough to turn what would have been a direct hit into a glancing blow.


The motorboat operator didn’t see Adam until after the impact. Worse, he didn’t stop. He and his two passengers—presumably his sons—just stare at Adam and keep going. (Note to all you dads out there: this is no way to win Father of the Year).

As Adam’s friends yelled at the boater to stop, Adam calmly picked up the pieces. He gathered a bilge pump, an errant flipflop and Mr. Coconut, who went overboard in the fray.

Remarkably, Adam was unhurt and his kayak was still afloat. The true force of the impact only became clear later, when he assessed the damage. The jolt had sheered a 3/8-inch steel rudder pin in half, and pretzeled the Hobie’s aluminum seat rails.

Seven feet—the margin those frenzied pedal strokes gave him—is all that separated Adam’s body from the full brunt of the blow. A direct hit could have knocked him off the kayak into 52-degree water. It might have busted his head.

But thanks to his evasive action and a good bit of luck, Adam escaped injury and the damage to his kayak seemed superficial. It wasn’t even leaking. Naturally, Adam decided to keep fishing. Talk about a cool customer—his hands were rock steady as he rigged a fresh jig and dropped it into the water. They don’t call him Die Hard Fishing for nothing.

Adam didn’t have to wait long to hit it big. He was leaning over the back of the kayak to check out his damaged steering when his rod bent double. Moments later he was fighting a massive lingcod, kneeling in the kayak because he didn’t trust the broken seat to hold him in the boat.


When Adam finally brought the three-foot lingcod to the surface, his friends were giddy.

Just like that, Adam had gone from a scary on-water collision to the fish of his life. A strange day indeed. The video he made of the adventure earned more than 1.2 million views on YouTube, and contains plenty of lessons on how to behave, and how not to behave, on the water.

In a new video for the U.S. Coast Guard’s safe boating program, Adam runs down the top six things he learned from the incident.

The first is always wearing a lifejacket and dressing for immersion. Adam’s was nothing fancy, but the U.S. Coast Guard Approved Type III lifejacket would have helped him stay afloat even if he was injured. Almost as important is his wetsuit. If Adam had ended up in the water, the wetsuit would have bought precious time before the hypothermia began to set in.

Second, he carried a handheld VHF radio and fished with friends. His crew was close enough to see everything, but if they’d been a little farther away the radio would have allowed Adam to tell his friends he’d been in an accident. And if he’d been injured, the radio would have allowed Adam or his friends to alert the U.S. Coast Guard or local rescue authorities on VHF Channel 16. Beyond safety, the handheld lets him call in support when he hooks up a big one. You can only yell “Fish On!” so loud.

Third is visibility. Many of the comments on Adam’s YouTube page noted the subdued color of his Hobie, as well as his lifejacket and wetsuit. Adam agreed. After the accident he installed a bright orange flag from Railblaza and upgraded to a brightly colored NRS Chinook OS lifejacket. His next Hobie will be highly visible too.

Fourth is to think like a power boater. Adam’s family didn’t have a boat growing up, but they often went out in friends’ boats—including outboard skiffs like the one that ran him down. Visibility on the water can be compromised by all sorts of things—fog, glare, low-angle sun, or as in the case of that tin boat with a rear-mounted outboard, the bow of the boat itself. Adam knew he was in trouble when he spotted that boat coming at him, and couldn’t see the operator’s eyes.

Being around other boats in a kayak is like riding a motorcycle in traffic. You have to assume that the other guy doesn't see you, and act accordingly. The seven pedal strokes Adam took before the boat mowed him down turned a potentially tragic accident into a glancing blow. That’s a good thing. The bad thing is that even though he saw the boat coming, he couldn’t yell loud enough to get the operator’s attention.

Which brings us to number five: Carry an air horn or whistle. A sharp whistle blast might have alerted the power boater in time to avoid the collision. Even if not, a whistle is an essential safety aid for kayakers and other boaters. It allows you to signal your position in fog or dark from well beyond vocal range. They cost three bucks, take almost no space in your lifejacket, and save lives.

Finally, keep fishing. You might just catch your personal best. 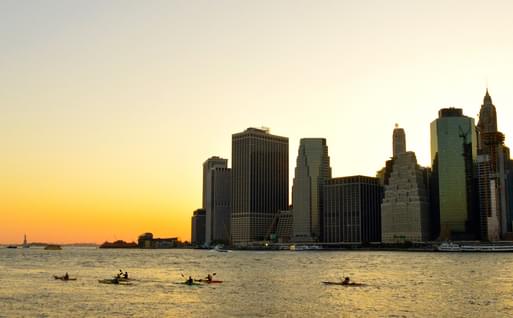 Kayakers at sunset in New York Harbor. Vor/Shutterstock New York City is an extraordinary place to…