Imagine kayaking in the unforgiving North Pacific Ocean, where on even a warm day, the water temperature rarely gets above fifty degrees? Imagine paddling without the luxury of neoprene, coated nylon or synthetic fabric of any kind? Imagine wearing paddling clothing without being able to secure seams and flaps with a zipper, buttons, snaps or hook/loop closure strips? Yet, with seemingly crude and environmentally vulnerable garments and gear, the ancestors of modern kayaking plied the sub Arctic waters of the Pacific Rim for thousands of years. 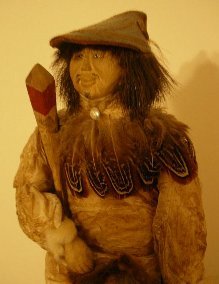 Many authentic articles of Native clothing have been preserved in collections gathered during expeditions to Alaska made throughout the 19th century. The Finish-funded Etholen expedition, for example, brought back to Europe hundreds of articles of newly made clothing, accessory apparel and equipment used by the indigenous people of Alaska. Many of those articles were directly related to kayaking - a major activity in the lifestyle of the coastal villages. Articles of clothing were newly made, hardly worn and therefore in excellent condition - a level of quality preserved today and available for study.

Some kayaks were also collected but a large majority of information on pre-historic kayak design comes from carved models made of stone or bone - some revealing intricate detail and hints of construction techniques. In some models, details on paddling garments were likewise detailed by some artisans.

More descriptions of what was worn by kayakers come from the daily journals written by Russian Orthodox priests who were members of the great Russian sea otter exploitations in the 18th and 19th century. Fairly thorough descriptions, including some crude drawings, have provided information on not only what type of clothing was used, but how it was made as well.

The principle garment worn by Pacific Rim kayakers was the kamlaika - a long, parka-like outer shell usually made from waterproof bands of cured bear or seal intestine. Long, tube-like lengths of gut was removed, soaked in fresh water to soften flesh and muscle tissue and then carefully scraped clean. One end of the processed intestine was tied shut and air was blown into the other end of the gut. Looking like a long, spirally balloon, the gut tube was allowed to thoroughly dry in the open air and then cut along the entire inner longitudinal axis. This created long, usually five or six inch wide bands of waterproof material that were first sewn into rings and then sewn together - one on top of the other - to form the torso tube, then arms and finally a hood. The waist area on many kamlaikas was flared, lengthened and fashioned to fit around the coaming on the kayak's cockpit. This design thus created a paddling jacket and a skirt combination all in one garment.

When bear gut was used (popular in the Prince William Sound area of Alaska), it was the spring bear that was the choice of the native seamstresses. Why? Because fall bears, when gorging themselves on salmon, would eat the entire fish - including bones that would pierce the wall of the intestine leaving micro-holes that would not enable a garment made from it to be waterproof. A spring bear, on the other hand, had its winter-long hibernation period to heal and re-seal those punctures by springtime.

Seams were double sewn, using two needles concurrently. One needle was used to apply a continuous rolling stitch while the second needle was used to create and in-and-out stitch that double-locked and sealed the fabric in place making it waterproof. For critical seams, or on especially thick materials, a stem of grass was laid into the seam and sewn down its length. When the grass swelled from moisture, it created a tight seal similar to that achieved with an "O" ring on modern lid or cap closures.

Kamlaikas were also made with small tuffs of caribou hair sewn into the seam every few inches. This process was repeated all up and down the garment, particularly on the torso area. While decorative in appearance, the tuffs performed an important function - they helped wick water away from the main surface of the garment thereby helping the kamlaika dry quickly.

Since the wrists and face/hood were openings in the garment, making the kamlaika into a dry-top required an ingenious way of sealing those areas tightly against the skin. Long thongs, made of leather or woven fibers were tethered to the wrists and the opening around the hood. A wooden or bone bead was affixed to the ends of these tethers. Even using seal skin mittens, the kayaker could grab the tether, wind it around his wrist or pull tightly down along his face to close off the opening. Once a tight wrap was secured, the bead at the end of the tether was tucked under the windings and pulled tight along those wrappings for an even tighter and secure fit hold. This method is still used in conjunction with many sealskin garments worn by Greenland kayakers today.

Other items of clothing - pants, boots, mittens - were usually made from the waterproof skins of the spotted seal. Sometimes caribou was also used. In ceremonial garments, the splayed, feathered breasts of shorebirds were sewn into place along the outer garment, shingle style. Besides being quite fashionable, the garment was also very good at shedding water.

The mitten used by native kayakers, and still seen today in Greenland has a thumb tube centered in the middle of the mitten instead of protruding out one side as commonly seen. This means there is no "right" or "left" mitten, enabling the kayaker to quickly choose a mitten for either hand.

A beautiful piece of equipment/clothing developed by the coastal kayakers in the Pacific Northwest region is the bentwood hat. These long, somewhat truncated cones had quite a pronounced profile when viewed from the side. Most were ornately decorated with colorfully painted designs, trimmed in sea lion whiskers and usually embellished by a carved ivory icon that topped off the bentwood hat at its peak. 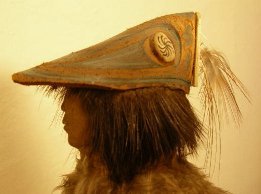 These fairly large, long hats were traditionally made from bent birch wood. Thin veneers of birch wood were steamed and made pliable. The panels were bent over a form, held in place and then the edges were joined as seams that were then stitched in place to form the final hat shape.

Randy Monge, a Pacific Northwest builder of native boats in the traditional designs used a modern nylon aircraft fabric called ceconite to cover his boats. He then recycled the scraps of the durable fabric and used the same resins used to complete the shell on his kayak to create a hardened "bentwood" hat form - in very close replication of those made by the Natives.

I asked him if, besides the shade and protection against the rain, he had experienced any other particular advantages when wearing the bentwood hat out on the water. His repeated experience was that he could hear sounds more clearly and from a greater distance while wearing this headpiece. Since hunting was a major activity of most kayakers, this makes perfect sense. Others have speculated that the profile of the long, pointed hat was very similar to that of the spy-hopping seal - a subtle form of camouflage for the paddler, against a seal's poor eyesight.

Caribou parkas were also worn by natives and it makes sense that such garments may have been carried for extra warmth. The advantage of the caribou material was that it could be worn hair side out in the rain, or hide-side out during extremely cold weather - the hollow caribou hairs providing an excellent insulating layer close to the wearer's skin.

I have never seen any mention of native kayakers wearing anything that even approaches a life jacket or PFD. Clearly the Greenlanders are world renowned for their ability to develop and used dozens of specific rolls to right themselves after a capsize. There appears to be no evidence supporting the extent of similar skills along the Pacific coast.

Kayakers did carry a flotation bladder on their boats but this was usually reserved for attaching to a line on a spear to slow down and mark a kill during a hunt.

The incredibly functional clothing that was created by the native kayakers of the Pacific rim area of North America (and later Greenland) pays tribute to the harsh challenges facing sea kayakers of yesteryear - and reveals yet another facet of the innovations developed by these craftsmen and women from antiquity. 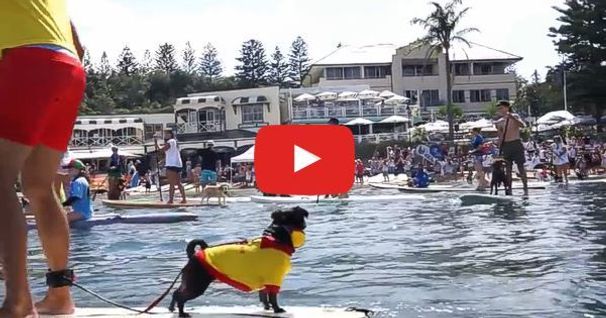