Imagine yourself as a native paddler, drifting stealthily into killing range of a spotted seal. You've got to secure your paddle onto the foredeck and silently pull your harpoon from its position. You haven't got time to struggle with slipping the tip of the blade under a deck line and you certainly don't want wasted motions or sounds to betray your position. Fortunately you have deck beads aligned along your deck lines that lift that line just barely off the surface of your kayak so the tip can easily and silently slip snuggly under it until the tension on that deck line holds it in place. 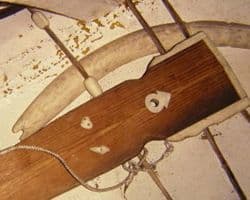 Deck beads on modern kayaks can be an equally handy and effective means of stowing gear quickly upon your deck. Add the factor of having a handy space to snag a deck line with your fingers and the beads utility is immediately doubled!

Deck beads - and I don't even know if that is the correct term - were an innovation of the Arctic kayaker. It's a means of raising the snug lines above the surface of the deck so that one can quickly and easily slide a piece of gear - or anything - under the 'grip' of the line, and to be able to do so quickly, even with cold hands or cumbersome mitts or gloves.

Originally native paddlers may have just wedged a piece of bone, stick or stone under the line to provide that minute space. Of course, these would never stay in place, probably falling out with each initial use. Some ingenious paddler decided he could keep the bead in place if it were actually attached to that line. That was most likely accomplished by drilling a hole in the bead and running the deck line, presumably a strip of sinew or perhaps a spun cord, through that hole. Several beads could be placed on one deck line.

I've taken pieces of deer antler, cut and sanded them to size, drilled the hole and even scratched amateurish scrimshaw designs on the pieces. These were easily strung along the 3mm or 5mm deck lines on my boat for an extra touch. Since my boat is ivory in color (similar to the seasoned color of a tanned seal skin used on ancient kayaks), the bone-colored beads look especially authentic when lined out along the deck. 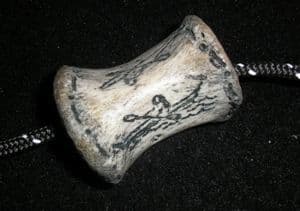 A larger bone segment, and an antler tip both add a bit of artistic form to their function of being not only the line "spacer" but also a larger knob I can grab onto in order to pull up on the deck line.

A recent article in a kayaking magazine brought this idea forward using a plastic practice golf ball - the ones with the holes in them. Deck lines can be threaded through the holes in the golf ball's hollow shell, lined onto the lines and used as a bead to raise the line off the deck.

Personally I don't want several plastic balls interrupting the profile deck lines of my kayak. Neither do I want something protruding that much above the surface, especially if I am going to encounter a lot of deck wash.

My safety deck line, running the outside edge of my fore and aft decks is loose enough that I wouldn't need a spacer to slide my fingers under for a grip. In fact, I probably wouldn't want those lines raised as they could catch seaweed and other flotsam I might encounter. However, a raised line mid bow may come in handy in a capsize where I just need to grab the boat somewhere or grab-walk my grip up to the bow (or stern).

Primarily, the beads were used for ease of sliding a spear, atlatl or other piece of gear under those lines. It's a convenience not lost on the modern Greenlanders, either. Several years ago, Greenland rolling champion John Peterson brought his boat to Alaska - sure enough, there were several deck lines equipped with such beads.

A side note on the use of beads: An earlier article on native dress talked about the use of a bead on the end of a sinew line that was used to wrap around the sleeve, at the wrist of the kayaker when wearing his anurak. The strapping enabled the kayaker to wrap his wrists tightly, sealing off the end of the sleeve to keep water out. After the final tightening wraps, the kayaker could press the beaded end of the strap under a few wraps and by tugging at the end of the strap with the bead, could tighten the entire wrappings securely. A similar tightening process was used around the parka hood, too.

While they are two totally different applications of the same kind of 'tool', it shows yet another innovative approach to problem solving by the native kayaker - and that a truly good idea usually withstands the test of time!

Imagine kayaking in the unforgiving North Pacific Ocean, where on even a warm day, the water temperature…

It’s somewhere along the north Pacific Rim, early spring. You need to build a boat in which you will…