It’s somewhere along the north Pacific Rim, early spring. You need to build a boat in which you will hunt seals, caribou, perhaps even whales. It needs to be at least sixteen feet long yet the longest pieces of wood are short fragments of limbs and trunks that drift ashore (there are no trees because you live too far north). Oh, yes, there’s one more thing. Before you can begin to make this boat ­ you have to make the tools you’ll need to build it. 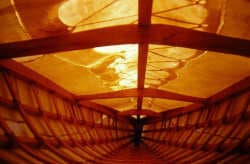 Welcome to the world of the ancient kayak builders.

These incredible craftsmen designed and built boats of incredible quality, style and utility. These designs are still seen today in boats that even high-tech computers cannot improve upon. What were some of the techniques used by these ancient native boat builders and mariners that enabled them to create such seaworthy vessels? 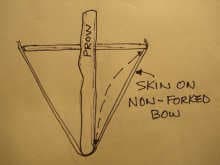 Boat designs varied by regions and represented the hunting style of a particular culture. For example, the communities that lived along the coastal range of the caribou would use their kayaks to hunt at the river crossings used by the migrating herds of the far north. The caribou was most vulnerable while crossing these swift and cold rivers. The kayak hunter needed to be fast in order to reach these herds as they were swimming across the rivers. Kayaks were sleek; the rear deck was low so the kayaker could sit on the back edge of the coaming and look up or down the river to spot the herds as the approached. Upon seeing the herd, the kayak caribou hunter slid forward into the cockpit and raced to the crossing. Using spears and bow/arrow, he could paddle up alongside the swimming animal and dispatch it quickly. Stealth was not a concern, just speed.

Those kayakers who hunted seals and other marine mammals had to approach their quarry cautiously, without being detected by the animal. Their boats were narrow, stealth-like craft. Their paddling action and profiles kept the kayaker close to the water so as not to be detected.

A third group of paddlers were gatherers who harvested edibles from their tide pools. Their boats were extremely short and wide so as to provide a steady platform from which to literally pluck critters from the shallow pools right offshore. These boats were so stable that this culture has no known or recorded rolls or rescue techniques. 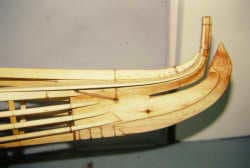 No matter the different needs of the boats, most were constructed similarly. The keel was fashioned from long, narrow pieces of wood, oftentimes held together lengthwise with a scarf joint lashed and/or pegged together. Bow and stern pieces were fashioned from planking or in the case of the bifurcated bows of the Aleutian region, from the curved root buttress of coastal spruce trees (the grain followed the natural curve thereby making turned up bow pieces much stronger). So valuable were bow pieces in some cultures that stealing another’s piece was punishable by death!

There is usually always some debate as the symbolism in the design of bow pieces. Some, like the King Islander, have a board bow piece with a large hole cut into its prow. Some suggest it is symbolic or representative of some sea spirit? Perhaps. The native word for this piece is typically translated merely as: “The place where you grab the kayak with your hand.” The utility of the hole was to provide a handgrip to help pull the boat up onto ice flows.

On Kodiak Island, the bifurcated or forked bow of the Alutiiq culture reminded many of the gnarled “beak” of a dying, post-spawned salmon. However, this particular designed served two very distinct functions. 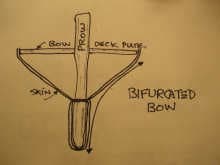 The long, vertical section served as the necessary bow “handle” which could be grabbed to help pull a boat out of the water. The slit in the prow enabled the skin to be stretched over the two halves of the bow. The lower half formed an acute, knife-like bow to help the boat cut through waves. The upper half with a horizontal bow plate enabled the skin to flare out giving the bow needed buoyancy so as not to cut or sink too deeply (see diagram).

Other innovations in construction included ­ as observed in a few museum specimens ­ the use of two bones sliding against each other to reduce the friction between the keel and ribs. The bone was strong enough to enable the boats to flex without wearing away the wood. Ribs were lashed to the deck and keel with a running lash that wrapped around each juncture but instead of being cut, was drawn down to the next rib in one continuous length of sinew. 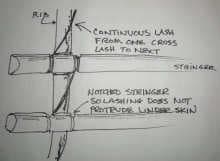 Some boats were equipped with a rudder made from the flat hipbone of a caribou or seal. Sealskins were used to make flotation bladders to tie to hunting harpoons or perhaps to even aid in a recovery.

While materials and construction techniques have evolved to the science of today, the basic designs and functional methods can be traced back thousands of years to these remarkable ancient kayak builders.

Imagine kayaking in the unforgiving North Pacific Ocean, where on even a warm day, the water temperature…