Here are the five things you need to do if you're just getting started in kayak fishing.

All right, so we're gonna go over kayak fishing for beginners. I'm not going to go over rods, reels or even kayak selection as that could be a whole other video in itself, but we are going to talk about five things you need to do before you just get started fishing from your kayak.

Go out push your kayaks limits with no gear, and what I mean by that is even if you just take your fishing gear with you and leave it in your truck or vehicle you need to take that kayak out empty and push it to the limit of how far you can tilt it and get used to the stability of it. If it's spring or summer you can get out and actually try to flip it, jump out of it and climb back into it, with your PFD on of course. Understand the limits of your boat and if you do that you'll be much more comfortable in it with all your gear while you're fishing and not be anxious or nervous if you're trying to land a fish twisting and turning around to land it. You want to get used to your boat first before you ever go out on the water with your fishing gear to start fishing.

Fish With Only The Basics

Go out once you're comfortable being in the kayak, whichever kayak brand that maybe, but only bring one rod, one small bag or one small tackle box and fish for a few hours or a whole day if you can with just that one rod. Maybe do a few trips with just that little bit of equipment to get used to being in the boat and fishing and seeing where you want to set stuff up. Twist and turn and imagine where you would put that rod or put your tackle box rather than rushing out fully rigged in your kayak as you've seen in a lot of pictures. I mean you get on Instagram or Facebook and see all these amazing rig outs that people do on their kayak. One of the fun things about kayak fishing is that it's a DIY project. You build it yourself! But the first time you get out or the first few times you get out, bring one rod, one little bit of tackle, get comfortable fishing from it and figure out where you want to put things.

Start Building Out Your Kayak

What you’ll want to do next is once you've been out in it and gotten used to the boat and fishing out of it with minimal tackle is start adding to it. Get a crate. It's one of the first things you're gonna need just to store your tackle boxes in. Bring a couple more rods with you whether your boat has pre-installed rod holders or you're putting a few on your crate. Bring a few more things with you so you can get used to being out there. Get out and get yourself a measuring board. And now I'm specifically talking to people that are going to start kayak tournament fishing. If you're going to do that, you're gonna have to have a measuring board. So while you're out now and have added a little bit more gear, catch a few fish, take a picture of them on board whether it's a big fish or a small fish. Get used to doing that on your own by just going out casually fishing. Little by little you'll add more accessories to your boat and really figure out what's comfortable for you, what you need, and what you don't need.

Get Involved In The Community

Find a local club and go to a tournament. You don't have to go with the idea of winning. If you're an accomplished bass fisherman but you're just new to kayak fishing, you may try to win. But just going to a local tournament and meeting some of the local anglers and seeing their rigs, asking questions, making relationships, and making fishing buddies that you can go out with and see how they manage fishing from their kayak is a huge thing. There's so many guys and girls around here that fish in our local club in Arkansas that have become forces to be reckoned with on the tournament scene that barely knew what a kayak or kayak fishing was a couple of years ago. But they dove into the local scene, learned a lot and now have gotten to be fantastic anglers. So if you just start now, go get out to a local tournament. That twenty, thirty, or forty dollar entry fee is worth it for the information you're gonna gather while you're there.

Level Up Your Kayak

Now it's time to level up a little bit. You've been fishing, you're comfortable in your boat, you've got a few accessories on it, you've been to a local tournament and figured out what the requirements are there and now you can really start to level up with electronics, more rod holders and more tackle you're going to carry with you and really top off and finalize your fishing rig and how you're going to approach kayak fishing. Some people like a little bit of stuff and some people like to load their boats down like me. I've got stuff all over the thing! Now you're ready to get involved with your local group and find a good social media group where you can get information. Also, Youtube obviously is a huge source of information. But get out there and have fun. It's a great sport, you're gonna love it! 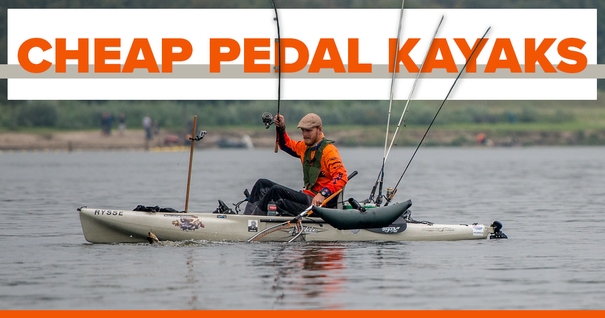 Not so Traditional Fishing Yaks

It's hard to ponder the evolution of the kayak without revisiting where it all began. Enter the Inuit…