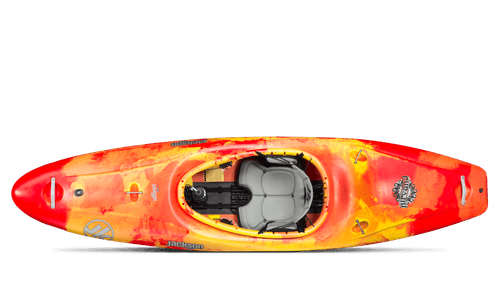 The Nirvana creek boat makes you faster, more confident, and will get you through rapids with more control than ever before. A dry bow keeps you on top of holes and waves and the nimble feeling while maneuvering assures that you stay on your line in the hard rapids. Racers will be delighted to paddle this boat as it, unlike most racing kayaks in the 9’ range, is easy to paddle and confidence inspiring, and the speed of it is mind boggling. If you want a river running/creek boat that takes the rapids down a grade, the Nirvana will do that for you.

Read and submit reviews for the Nirvana Medium.

Read reviews for the Nirvana Medium by Jackson Kayak as submitted by your fellow paddlers. All of the reviews are created and written by paddlers like you, so be sure to submit your own review and be part of the community!

I’ll get right to the bottom…

I’ll get right to the bottom line. The Nirvana is not only my favorite of the fast 9s, it is one of my favorite boats of all time.

When I like a category, I buy all the good boats in it and sort it out by living with them for a while. The Pyranha 9R (L) was my first acquisition and whetted my taste for this genre. The Dagger Phantom, Lettmann Granate XL and Nirvana (M) followed. They seem to split down the middle with the Pyranha and Jackson having edges and planing hulls while the Dagger and Lettmann are more creeker-like with soft edges and displacement hulls. In this latter category, the Dagger is a very good choice.

The Jackson is plenty fast enough and it will maneuver with the best. It rolls easily, boofs well and resurfaces with ease. It’s also a pretty good surfer. I like the Jackson outfitting, mainly because it’s simple to adjust and you can change the foot bulkhead on the fly. It’s a great all round kayak and is what the second generation Zen should’ve been.

But, I deduct a half point for the knee position, which is just a tad low. Another half point comes off for that inane GoPro mount drilled into the forward deck, whether you wanted it or not.

They classify it as a fast creeker. To me, it’s a fabulous river runner.