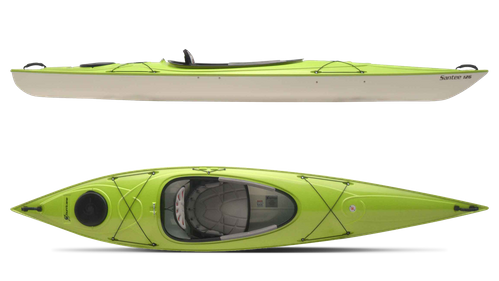 The Santee 126 is a kayak brought to you by Hurricane Kayaks. Read Santee 126 reviews or submit your own review to share with the paddling community. Check out a few other kayak recommendations below or explore all kayaks to find the perfect one for you!

Read and submit reviews for the Santee 126.

Read reviews for the Santee 126 by Hurricane Kayaks as submitted by your fellow paddlers. All of the reviews are created and written by paddlers like you, so be sure to submit your own review and be part of the community!

Tracks well, very light due to thermoformed deck and hull, stable. Holds enough gear for an easy night or two out, great for day trips or just a couple of hours. This isn't a whitewater rock-hopper, so don't treat it like one! It should last for many years if cared for properly and not abused. Great kayak.

I have had my Santee 126 for 5 years now. The main reason I bought it is because of it's lightweight, I'm in my 60's, and I drive a lifted Grand Cherokee, so I was trying to keep stress off of my back. After doing research it was a toss-up between a Hurricane and an Eddyline. A local EMS had a sale going on and Hurricanes were on sale, so I jumped.

I've been very satisfied in pretty much every aspect of this kayak. It's not the best at anything, but it is quite acceptable at everything. It's fast enough, tracks straight, and is quite stable. I have used it very carefully in many "non-recommended" ways, and it has stood up to everything. I often paddle small rivers sometimes clogged with downed trees and strainers, and sometimes end up pushing myself over barely-submerged logs. I do NOT do rocky rivers and rivers with rapids with this kayak.

The only incident I've had with it happened on land. In taking it off of the roof one day my friend, who was on the stern end, had the handle slip out of her hand and the stern dropped onto the pavement from about 18"-24". I gave it a quick look and everything looked fine so we put in the water. This was just a 2-hour flatwater paddle. Turned not to be fine. When we got back and went to pull the boats out the entire rear compartment was full of water. It was easy to fix, and I also added a protective strip to the entire keel. That was 2 years ago and there have been no problems.

I also have a 17' Dagger, a 13' Perception, and a 10' Future Beach which I usually use for beginner paddlers. It's also what I use on rocky rivers. The Santee is always my go-to kayak when the destination is right.

I wanted a light, versatile…

I wanted a light, versatile kayak mostly for short paddles on Madison lakes and surrounding area. I got rid of a bulky and heavy fishing kayak which I seldom used, and the Santee 126 has proven to be just what wanted. Easy to get on and off top of car alone. Paddles easily and tracks very well with no rudder. I keep a really good kayak (with rudder) in Door county for longer trips, but this has proven be perfect so far. As with previous reviews, I am cautious about putting too much weight on cockpit, but after several paddles this has not been a problem. Great boat for the money.

I simply love this kayak ! …

I simply love this kayak ! Second kayak after a Cabellas Emotion Guster angler 10 ' , which was a decent boat but somewhat heavy. This Hurricane Santee 126 is a super light kayak and easily carried to and from water . Once in the water it floats like a dream , gliding through with minimal effort. I am super happy with this boat and haven't thought twice about the purchase and can't wait to get out there again .

The Hurricane Santee 126 Sport is a very stable, easy to carry, maneuver and paddle, The Sport version makes it very easy to get in and out of, lots of room for various items, and has plenty of room for our dog.

I'm 5' 7" 125lbs. The seat position has it perfectly balanced front to rear, so tracking is very good, but it barely drew any water with me in it, so it rode high. The high-ride height combined with the 28" beam made it a stretch to paddle comfortably, I have the right length paddle, but I'm also a weak paddler. Things may have improved over time, but I opted to get the Sojourn 126 instead, which was designed for smaller paddlers .

Submitted by: paddler237034 on 8/13/2016
I purchased Santee 126 in 2013. Shortly into it's third season (2016) the kayak developed a crack in the bottom of one of the many scratches the underside of the boat had developed over it's short time of use. Additionally the seat was mounted Crooked and had to be taken out a remounted at the dealership. Hand made quality at its finest. The kayak has now developed it's third crack/hole. I would say the revolutionary new material this boat has been manufactured from is not good at all. The company website mentions their boats are extremely durable but are not recommended for whitewater. I have never used my Hurricane in whitewater but it still has cracked from gentle touches with the bottom here and there.
4

Submitted by: Brifrost on 7/8/2016
Awesome light weight kayak. Great for older people. Easy to get in and out of. But the hatch isn't 100% waterproof and the footrests suck. They are very easily snapped backwards. The only way to fix them is to take completely off and reattach. Overall worth the money!
4

Picked up my kayak back in…

Submitted by: paddler236700 on 4/17/2016
Picked up my kayak back in February and have used it several times in the Indian River Lagoon, Blue Cypress Lake, Fort Drum Marsh. The kayak is super light and easy to carry. Even though it is light you still have to be careful in windy weather if you raise it too high in the air the wind can easily catch it and make it feel much heavier.

Getting in and out of the kayak is easy although I do find that the sides of the kayak give a little too much for my liking. Nothing has cracked but it sure does bend when I push on the side to lift myself up. The main storage compartment is large and remains water free. The smaller front compartment is nearly useless due to its location. I think it's better as an air compartment to aid in flotation in case it goes under.

I am new to kayaking but I do believe that the kayak handles well and is well suited for the lagoon and lakes nearby. The available colors are bright and shiny, the hull is white and so far is holding up well. The seat is comfortable and the adjustable backrest is a big plus.

I would recommend this kayak but if possible try out before you purchase it. I purchased mine from Orchid Island Bikes and Kayaks here in Vero Beach, Fl. With their help I was able to purchase the kayak that was right for me.

I was looking to replace two…

Submitted by: paddler236544 on 9/28/2015
I was looking to replace two ancient Necky Manitou Sports. I was at the kayak store looking to get two Neckys. I spotted the Hurricanes. I had always liked the way they looked with the white hull and brightly colored decks. The sales person told me all about the Santee 126's, light weight, stable, great tracking and easy to get up to speed, and great stability. They were way more expensive than the Necky's but I do not regret the purchase. I got two of them one for my wife. We took them on several lake trips first. Flat water and no wind. The boats were like a dream to paddle. Tracked so well and the glide was amazing. My wife was able to open the hatch and retrieve snacks while under wayl. Great great great. Next was a trip down the French Broad river in Asheville NC. Boats were easy to maneuver around the rocks. We both for stuck on the rocks and I was worried that the bottoms of such light weight boats would be all torn up. I need not have worried. When we got to the take out point the bottoms had very light scratches. No worse than any other boats we have had. The seats are comfy and adjustable.

Now the bad.
When you are adjusting the footrests there is a plastic rod that you have to twist and move forward or back. This mechanism is fragile. The little clip that holds it in can easily be snapped off. It can be snapped back in but be careful of that. Being such a light boat, it doesn't have the solid feel of a roto-molded boat. You can push in on the deck and it will give. But it seems sturdy and strong. I am not sure that I trust the seams around the hull and deck or the seams around the bulkheads, so far though they are holding up just fine. Drink holders are off to the side and under the deck, not ideal placement. Lastly they are expensive.

The Good.
Light light light light!!! Pretty pretty pretty. Tracking and stability for days. Glides forever. Very good secondary stability, you can carve it if need be. Two bulkheads front and rear for floatation. Front bulkhead has a small hatch below decks.

Would have given this boat a 10 if it wasn't for the flimsy feeling of the thin materials. But I guess that is the trade off for such a light boat. Would for sure recommend this boat to a friend.

My daughter bought me this…

Submitted by: katt212 on 9/8/2015
My daughter bought me this beautiful kayak for Mother's day three years ago and I love it! Glides through the water with ease, tracks well, comfortable seat. best of all, I can carry it myself and I'm 62! Looking forward to many more great years with my Hurricane kayak
4

This is hands down a great…

Submitted by: guest-paddler on 6/29/2012
This is hands down a great kayak for the rec user/ long daytripper. Light weight, easy to paddle, easy to maneuver and fast. But still stable enough for a beginner. I looked for literally 6 months and tried out different brands before settling on the Santee 126. I already had a Dagger Blackwater 12.5 but needed another so my son and I could each have one. This fit the bill perfectly.

While it won't handle rough white water or rocky conditions as well as my Dagger, that is not what I bought it for or it's intended use. In rivers where I am not going to scrape the bottom constantly or in lakes this kayak excels. Though I don't live near the ocean, I am certain this would do well in bays, backwaters and near the coast as mine has handled the chop and waves of a nearby lake with ease.
Oh, and this is definitely one of the best LOOKING kayaks out there as well.
Haven't tried an overnighter yet, but sure this yak can handle it.

Only complaints, and they are minor ones, is the lack of a drain plug and no cup/ bottle holder. But for all the other fine features,including generous storage space in the stern bulkhead, this is a true keeper.

My thanks to Dave at D&D Outfitters in Cincinnati for answering my many questions and helping me select this fine craft.