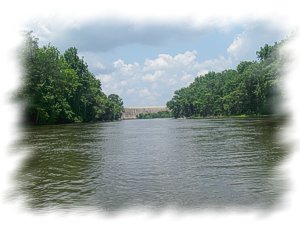 This writer (Don Meece), from Salemburg, NC, along with Wayne Charles from Lexington, NC were invited by Paul Ferguson, from Raleigh, NC (author of Paddling Eastern NC), to do a weeklong trip on the Wateree River in SC. On Sunday, May 23, 2010, I met Paul in a parking lot outside of Fayetteville, NC, close to I-95, to transfer my canoe and camping gear to his van with the help of my wife, in a pouring rain no less. We were to meet Wayne at our takeout at Trezvant (Tresvant) Landing at the end of Saw Dust Road off of Hwy 601 at 1100 and load his canoe and gear on Paul's van.

When Paul and I got to Saw Dust Rd, it had a gate and lock on it -- change of plans. I quickly called Wayne on his cell phone and told him plan B was to meet at the boating access on the Congaree River on Hwy 601. He did not receive the message too well, due to poor cell coverage but we passed him on Hwy 601 and told him the plan. The Congaree is approximately 2 miles upriver from the Wateree and when it joins the Wateree becomes the Santee. We headed back to the boat access on Hwy 601 on the Congaree, transferred Wayne�s canoe and gear and left his truck. This is a nice landing with ample parking space. We arrived after about an hour at the put in of our 78 mile trip at Lugoff Landing at the foot of the Wateree Dam below Lake Wateree. After loading the canoes and prior to starting off the sirens on the dam sounded meaning they were opening for a dam release. We headed out anyway around 1250. There were a few boaters near the dam and herons and egrets across the river.

We traveled down the river making almost 6 mph with the current through rock gardens and small class I rapids. After successfully going through these rapids watching Wayne�s route, I was entering a small class II rapid when disaster struck. I was trying to do a hard draw stroke with my bent shaft paddle (Wayne thinks they are worthless) when the paddle broke. I was trying to get my spare paddle out but had problems. The stern of the boat, being heavier than the bow, swung around backwards, and I went through the rapids stern first. Wayne did not know I broke my paddle and thought I was showing off but little did he know. I decided to close my eyes and hope for the best. He watched after eddying up. I made it through the rapids but there were other rapids ahead. Before these rapids, I finally got my spare paddle out and paddled over to Wayne. Paul had already made it through and was getting ready to throw me an extra paddle. We decided to stop for lunch and Paul named the rapids, "Broken Paddle Rapids". Once through these rapids the water was calm but fast current.

We encountered some kayakers who were fishing and passed them by; they had put in at the dam and were taking out at the next bridge. We reached the Hwy 1 Bridge, 7.1 miles down at 1458 hrs, which would be a good takeout for a day trip. After five minutes we crossed under a railroad bridge at 8 miles, and at 1537 hrs we crossed under Interstate 20 at 10 miles. At 1558 we had gone 11.5 miles and passed a creek, Big Pine Tree Creek and finally found a sandbar on the left to possibly camp. Paul had paddled down river and found a higher sandbar but a cabin was in front of it through the trees. The first sandbar we sat and watched as the water came up and soon realized it would be flooded. Since putting in the water came up from 5 � ft to almost 10 ft that night. We opted for the higher sandbar in front of the cabin. There was no one there at the cabin and thought it would be safe. In SC, land below the high water mark is supposed to be public.

That night after setting up the tents and making sure the canoes were high enough and tied off, we had supper of grilled steaks and broccoli and cheese sauce. Not sure what Paul cooked. Wayne and I were sharing meals with me cooking the breakfast, as Wayne doesn�t cook. He does do coffee and oatmeal but on previous camping trips on this forum has cooked red beans and rice, other than that he can make it with beanie weenies. We had paddled 17 miles the first day thanks to the current and dam release. In addition to the herons, egrets, and other birds we saw a lone loon. 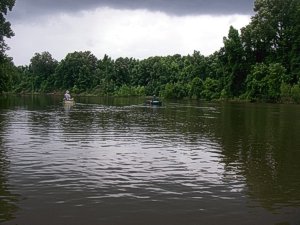 The next morning, Monday, May 24, after getting up and Wayne doing the coffee, I cooked breakfast consisting of Meece Muffins; egg, cheese, sausage, on an English muffin. I opted to put hot sauce on mine; however Wayne does not care for hot sauce and a plethora of other food and condiments. We left camp at 0905 and at 1100 took a break at mile 22.2. (Mileage is running miles as I did not restart my gps at 0 miles every day.) At 1200 we stopped for lunch, 24.9 miles total and at 1600 we found a nice high sandbar on river right at 35.5 miles.

About mile marker29 is the property of the SC State Penitentiary Farm and this property runs a good distance. Paul had a paddle trail guide that said not to camp on the left bank on this property. We could hear the loudspeakers from the prison at our campsite. During the day we had off and on rain and after setting up our tents, it poured. Paul and Wayne saw a turkey and I heard some in the distance. It finally stopped and allowed us to cook supper consisting of steak (again) and steamed vegetable medley of potatoes, broccoli, carrots, and other stuff. That night we pulled our boats way up on the sandbar and this was a good thing as the water almost came up 5 ft still from the release of the dam, 35 miles upriver.

The third day, Tuesday, May 25, I cooked Wayne and I country ham and scrambled eggs. We left camp at 0924 and stopped for lunch on a sandbar at 1148 after a total of 43.5 miles. At about 1320 hrs, 46.1 miles, we could see Cooks Mountain in the distance; it rises 335 ft above sea level. At 1500 hrs we crossed under hwy 76/378 west of Sumter, SC and mile 52.1. There is a nice boat landing at this bridge. This was the first bridge after about 44 miles, so this section is definitely a camper. At 1600 hrs, we found a nice high sandbar with trees at mile 55.3 and was a great campsite. After setting up tents and Paul put his tarp out to dry, the rains came again but quickly subsided. That night it was steak again, and boil in bag broccoli and cheese. Paul decided to cook with us and had a filet mignon.

Wednesday, May 26, after waking and cooking breakfast of side meat and pancakes, we packed. Now for those of you who don�t know country ham and side meat, they are both from the hog and cured with salt so they don�t need refrigeration. Side meat is like bacon and is very salty which you can soak if you like in water. The meat I had was peppered and was lean; most has a lot of fat on it. It is a Southern thing. We packed and left camp wondering if we were to find anymore campsites or have to paddle the 23 miles to the take out as the maps showed nothing but swamp.

At 1130 we passed under a railroad bridge at 62.6 miles and at 1200 we stopped for lunch on a sandbar across from a high hill about 75 feet above the river. At 1338 hrs, we passed under an old railroad bridge, mile 68.1 that Paul and Wayne said was the Palmetto Trail. At 1358 we passed by Sandy Creek on left, mile 69.2. After this, Wayne and I saw a huge alligator about 8-10 ft long on the left on a small stretch of sand. The gator quietly slid in the water but stayed on top. 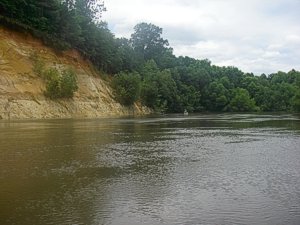 At mile 71.6 we came upon what the gps said was Starks Ferry, a high bluff with a small run down cabin but no access. We had worried as since this morning we had seen no campsites. Right after Starks Ferry at mile at mile 71.8, at 1425 hrs, we found what was to be "last resort camp". It was a beautiful sandbar big enough for three tents and a kitchen area. We had to clear a few willow branches but this was our home for our last night. It was early enough so we all decided to take a bath with the thought of the alligator we had seen earlier in the day on our mind. It bothered Paul and me, as we only went in knee deep, but fearless Wayne, dove right in.

Supper that night was, guess? Yeah, steak and veggie medley. I should have said earlier that we carry a small backpacker grill and use match light charcoal to cook the steaks. We had plenty of time that night, our last night, to enjoy our favorite beverages and discuss the problems of a canoe club we belonged to. I guess we might have solved them, at least in theory.

The last morning, Thursday, May 27, we got up, each to his own breakfast. Wayne cooked his oatmeal and I ate my favorite raisins and spice instant oatmeal and coffee. We left at 0835 and at 0900 on the left the Little River came into the Wateree, mile 73.1. At 1020 we reached the Congaree River, mile 78.3, on the right and it was wide. We headed upriver of the Congaree, against the current and wind and finally made the take out at 1110 after 80.3 miles. Going up the Congaree was the toughest part of the trip. At the take out was a stern paddle wheel boat, which we had seen some others below the hwy 1 bridge earlier in the trip.

Overall, this was good trip, a little wider than I preferred, and we were fortunate to find campsites on nice sandbars. It would have been a little easier if we could have taken out at our originally planned takeout at Tresvant Landing instead of paddling up the Congaree. We had plenty of food, water and beverages, temperatures were hot during the day and cool at night and not many bugs. We saw plenty of bird life, alligator, snakes, although not that many and very few people. This is basically a desolated river with not too much development. I had a total of 80.3 miles on my gps but after running a true track on the computer it came to 78.74.

Put in was at the Wateree Dam. Come up Hwy 601 near Camden, SC and take state road 5 or Longstown Rd North to Wateree Dam Rd. Take out was on the Congaree River where Hwy 601 south of Camden.