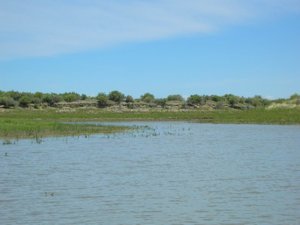 Canoeing in the middle of the Oregon desert?

The Warner Wetlands is a labyrinth of interlocking twisting, looping channels connecting a series of small lakes. Think of one those English garden mazes that is all water. At high water level one source said there were over 300 miles of channels total, but our choice was more limited due to the dry winter. We spent two days paddling here, returning to our RV at night. The map lists a marked canoe trail, but the start at Turpin Lake is unmarked and the trail is marked with metal fenceposts that could be easily overlooked. The road to the trail start is an unmarked two track through the desert that took some backtracking to find. I looked at a topo map to find the coordinates of the turnoff from the county road, and used my GPS to find the intersection. A high clearance vehicle, such as a pickup or SUV, would be best for driving the access road to the trail. We were the only ones on the entire trail, did not see another soul all day. There are many side channels leading off from the trail and it would be easy to get turned around and lost. I used the track function on my GPS to keep a record of our route, and on several occasions the side channel we chose to explore dead-ended and we had to reverse course.

The second day we free-lanced to a small marshy lake called Mugwump Lake. Launched from the county road, paddled under the county road bridge (a large colony of cliff swallows living under the bridge took offense to our passage). We paddled around some channels that looked promising on the map, but all ended in shallows or mud flats and we had to backtrack (again, the GPS saved a lot of work). We finally found a route that took us to the south end of Mugwump Lake, and we put ashore for a break. There we watched a great dramatic wildlife show as a coyote was stalking a pronghorn on the opposite shore of the lake. Waterfowl of all kinds are in abundance, and a few river otter. The lakes are all flatwater, of course, with some afternoon winds creating chop. The channels had a very slight current. All class 1. No challenge or whitewater, go here for the wildlife and the solitude.

We camped at a brand new BLM campground still under construction, at the site of the old CCC camp. The town of Plush has a single bar/gas station/general store/cafe all the same one-room building. The small town park has a couple of potable water spigots for campers to fill up.

I would suggest to wait for an above average winter snowpack, then try this area in the spring/early summer, as by mid-summer the water will be too low.

USGS topo quads and topo maps loaded into a GPS.