by  Dale194
A self-supported trip created by Dale194 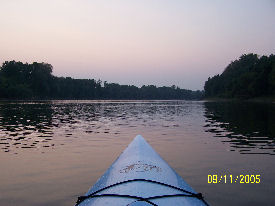 On the 4th anniversary of the attack on our country I decided to spend the day outside on the Wabash River. In Terre Haute the river is easily accessible by Fairbanks Park, a large park that runs along the river and has a large concrete boat ramp and dock. The current is very slow and I went south past the I-70 bridges where some sandbars have sped the current up a little and gave a little spice to the trip. I then paddled north, against the current, for a few miles until I could see the US HWY 63 bridges. Along this stretch I came across a beaver, (with a few feet) a species of crane I wasn't familiar with and a beautiful hawk, who struck a pose until my camera was ready, then he moved.

The river is quite low right now but I never drug the bottom. The Wabash is a muddy river but not as bad as the locals make it out to be. It is quite wide and the surface had some ugly spots from the slow current that weren't there last week. While I have not done any camping on it this year I plan to early in the spring.

The Wabash is hundreds of miles long, almost entirely contained in Indiana until it meets the Ohio River. You could spend as many days as you want on it and several towns would make it easy to get supplies. Next year I'll let you guys know how the camping is.

State river, boat must be registered.

From I-70, drive north on US HWY 41 (3rd St) to Farrington St. Left on Farrington until it dead ends into Fairbanks Park (two blocks away). The boat dock is on the south side of the park, behind the YWMC.