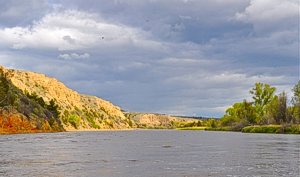 The Missouri River is one of my favorite paddling destinations. From the Headwaters in Three Forks, the fast moving current quickly takes you through some of the most scenic landscapes in the state. The area is rich in history from the days of Lewis and Clark to the present.

I departed with two fellow paddlers who had never been on the Missouri. These two were from Minnesota and were paddling all the way to the Gulf of Mexico--about 5 months of paddling.

The cooler temperatures made it very comfortable paddling. After several hours we arrived at Toston Dam. This is the first and smallest of the dams on the entire Missouri River. I used a postage cart to haul the first boat around while the dam worker was kind enough to haul the other two boats around the 1/4 portage in the back of his pickup truck.

Below the dam, the river picks up speed as the water levels rose higher from the weekly rain and snow. The occasional deer stared at us as we paddled along-- wondering what we were. After a short distance below the dam we opted to set up camp. The two newbies were in no hurry to rack up long miles and the short day gave them an opportunity to repack, make adjustments and get a feel for what lay ahead on their 3600-miles paddle trip. 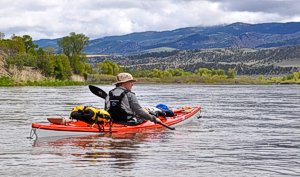 Despite the occasional rain we were able to build a nice fire to warm our bones in the 50 degree temps. I cooked the boys a feast as I do many paddlers who often depart on a long journey. It gave me an opportunity to paddle with new friends and provide a celebratory meal for them. Steak, corn on the cob, potatoes and Guinness beer was the flavor for the night. From there... they would be most likely eating mac & cheese type meals.

The night temps dropped to the high 30's but I was cozy and warm inside my sleeping bag. The sound of song birds began around 4:30 am and I lay their listening to them trying to determine what bird was singing each song. Was it a Mtn. meadow lark? ; I thought. As the sun slowly peaked over the hills warming our camp, we slowly packed our gear in our boats. I was to take out at the town of Townsend about 4 hours downstream. We paddled through the York Island area where the river is braided with many channels. Lewis & Clark camped here in 1805 and the islands were named after Clarks slave York who accompanied them on their historic journey. We soon passed the Crimson Bluffs described in the L&C journals. Their red appearance made for a brilliant contrast against the dark rain clouds.

Upon our arrival to Townsend, We said our farewells as the two headed out. From Townsend, I hitch hiked back to my truck at Three Forks. It's about a 40 mile drive. I always carry a paddle with me when hitching. It gets me a ride quickly every time. 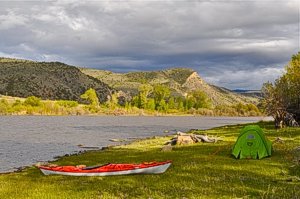 You can base out of Three Forks where there are motels and camping.

Solo Expedition Canoe. The other two guys had sea kayaks.

Drive west on Interstate 90 from Bozeman to Logan exit and follow signs to Headwaters State Park.