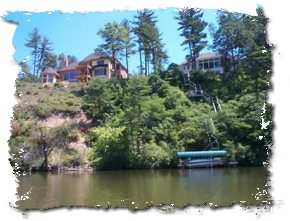 Late last summer, our family decided to purchase a kayak as a way to get some exercise, see some beautiful scenery, and spend some quality time together. We spent the remainder of last season in Houghton and Burt Lakes learning about our craft, getting comfortable with paddling, and testing it out with our boys, 2 and 4, to see if everyone would be comfortable for a period of time in it. Things went very well and the boys thought it was great. While we didnt take any long journeys, we felt the boys would do fine on smaller day trips to start.

We chose the Thornapple River for our first river adventure as it is close to home, slow-moving, and the distances we traveled were short enough for young boys patience and attention spans. We divided the trip among two different days, though it could have been easily combined into one. The first portion of the trip began in Ruehs Park in Alaska, where Thornapple River Road meets 68th Street. For rib lovers, the park is almost directly across the road from Sams Joint restaurant. There are small rapids right next to the park and you can put in either up river from them or down river. For down river entries, there is a small trail cut into the brush on the left after you walk down the hill into the park to access the river. This avoids carrying your craft over rocks going a different way through the park. We picked down river due to our experience, but paddled up into the fast water for a brisk start to the trip. The only real navigation issue on this section is right after the start once you cross under the 68th Street Bridge. There is a small island in the center of the river, and you need to stay to the right. The left appears too shallow in some portions to float through. The right side does have some slightly exposed rocks to avoid, but nothing that appeared to be able to upset our kayak. After that it was a lazy paddle past numerous homes, which line both sides of the river almost the entire way. The boys enjoyed the equipment at the new bridge under construction at 52nd Street, paddling by Thornapple Pointe Golf Course and the float under the bridges at I-96 and the new south bypass. It also appeared to be mating season for the carp and the fish were thrashing around in the shallows, some right next to the kayak, which made for wide little eyes. We continued on to Cascade Dam. There are steps to the left of the Dam that make for an easy portage. The boys and I had lunch in the shade at Leslie E. Tassell Park in Cascade (the portage point at the dam) while my wife was good enough to take the one car we had left at the park, drive to Alaska to fetch Scooby, our kayak-hauler, and come back for us. After a little more car shuffling, we were home after what was approximately a 2 1/2 hour slow paddle. 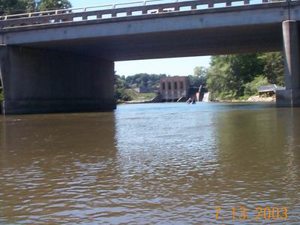 The second leg of the journey was on a much cooler day but thankfully just as sunny. We returned to Leslie E. Tassell Park and put in to the far left side of the park. There is a small trail to access the river at the edge of the parking lot. There also are steps down to the waters edge if you follow the path toward the spillway, but it is a longer walk from the parking lot. If you make the trip in one day, you could probably reenter the river at the steps if there is nothing else closer to the dam.

We left around 11:00 am that day and the trees to the right side of the river provided a fair amount of shade. Similar to the start in Alaska, the only real navigation point is just down river from where you enter. There are a number of exposed rocks (or at least there were at the water level we experienced) in the center and right of the river. Hugging the shoreline to the left made for an easy pass. Houses are even more numerous on this section of river, including some pretty impressive, large ones. The trip is fairly uneventful, broken up only by the pass under Thornapple River Road at Camelback Bridge. As we approached Ada Dam, we took out at a small dock where there was a boat launch. We later realized the space belonged to a local boaters club and was accessed off Thornapple River Road through a fenced gate. This was open at the time (Sunday afternoon), but may not be during different times of the week. There also appears to be a small rocky area to take out just past the dock closer to the dam. We wouldnt recommend parking in the gated area without prior approval; instead we parked in the small parking area at the sharp bend in Thornapple River Road next to the dam. This section of river took just over an hour with slow to moderate paddling.

A few other notes: the river is somewhat busy with boats, skiers, tubers, etc. during the weekends. It may be a bit noisy for those looking for a quiet, scenic paddle. There are few overhanging trees due to the width of the river and during midday into afternoon there is little shade to be found, especially between Cascade and Ada. There are few, if any places to portage during the trip due to all the private homes, though the sections are short enough it may not be an issue. The whole trip could be done in an estimated 4-5 hours at an easy pace, with the park in Cascade a perfect place to have a lunch break. We dont know if the boys are up to much more than a few hours at a time (maybe fishing poles will help?), but well continue our local explorations in the weeks to come.

To Alaska: from 96, take exit 43B (28th Street East) and follow 28th Street to Thornhills Road (road heads south across from D&W grocery store on the left). Thornhills turns into Thornapple River Road. Follow Thornapple past the airport. Turn left at stop sign to continue on Thornapple which ends at 68th Street in Alaska. Turn right, then an immediate left into Ruehs Park. To Cascade Dam/Leslie E. Tassell Park: follow 28th Street per above, and continue until 28th ends at Cascade Road. Turn right at the light and go mile and turn right at first light (Thornapple River Road). The park and dam are just on the left. To Ada Dam: follow the Cascade directions above, except turn left on Thornapple River Road. Follow for ~5 miles and parking will be on your right across from the dam at the sharp downhill corner.

The infamous Canoeing Michigan Rivers by Jerry Dennis and Craig Date has good information regarding the Thornapple River miles upstream of the section we travelled, though it does mention the rapids in Alaska.