This trip report chronicles my trip to the Econfina Water Management Area and St. Andrews State Park and surrounding area for the week after Christmas 2015.

With a stormy forecast for Panama City and Econfina area I have to admit that I almost didn�t go on this Tennessee Valley Canoe Club trip but I am glad I did, bowing to the predictions of the more experienced paddlers I was in contact with. The thunderstorms happened mostly in the evenings when we were off the water. Some paddlers camped around the Ecofina Water Management Area all week, while I opted to spend most of my nights at the St. Andrews State Park, since it was nearer to the majority of my paddling destinations.

Since I am basically a flat water paddler using a sea kayak, my plan was to paddle one day in the Econfina Water Management Area where the water was suitable for a sea kayak and my paddling experience. This paddle happened on Monday, the day after I arrived. This is the section travelling south from Econfina Blue Springs to the Hwy 388 Bridge. My GPS measured 9.6 miles but I am not sure if that is a straight line distance or the meandering distance that we actually paddled. I didn't see any alligators, although there were warning signs. I don't think they are very active this time of year due to the temperatures.

There were a lot of strainers and blow downs in this upper section but once we got to the Hwy 20 bridge the paddling was much easier and the creek more open. There were some blow downs that required dragging the kayak over some tree trunks but there were no unplanned swimming events but several close calls. There were multiple springs along the creek as evidenced by the crystal clear plumes of water. In at least one place the spring was so strong that to get to the head of the spring you had to paddle against the current to get to the opening. This section would have a lot of people tubing during the summer time.

Tuesday, I camped and paddled in the St Andrews State Park. Paddling in the bay and channel involved mostly calm water although this can change quickly. Lunch was at a picturesque sandy beach toward the channel. This state park has some camping sites right on the bay. If one of these were used, a paddler could leave and come back to the campsite. This time of year there was very little traffic in the bay. During the summer there would be more water traffic. 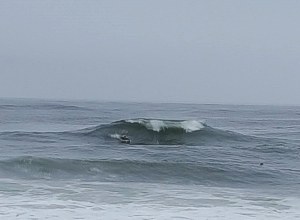 Wednesday I got up early and had breakfast on the beach at the ocean in the fog and watched the rolling 4 foot swells come in. My put in was the swimming area in the channel that was protected by part of the jetty on the bay side. The fog lifted and I paddled across the channel to Shell Island and enjoyed brief sun and a secluded walk along the beach strewn with shells. The rolling seas in the channel was a completely different experience than paddling on the lake, an understatement. Give the jetty a wide birth, it will wreck your day. It will give you access to the Atlantic but a paddler could get too close to the jetty depending on the waves, wind, and tides. The local beach shop at the state park rents kayaks but does not allow them to cross the channel to Shell Island.

The channel crossing had to be carefully planned so as not to conflict with fast boats, commercial shipping, and military ships. It's akin to trying to run across the freeway. Thankfully I saw none of these although in the week preceding this week there was a local report of a sea kayaker vs. a military hover craft conflict in the area but the paddler was not hurt.

Wednesday afternoon I paddled on Burnt Mill Creek, a creek on the north side of West Bay, Panama City. This was a quiet brackish Blackwater creek that was undeveloped and wild. It's reported by one of the locals that there are a lot of deer hunting that takes place back there and that fishermen would occasionally come in for the red fish. He has seen a few alligators in this area as well. I did see some what I call "alligator drags", places where they beat the brush and grass down flat to access the creek. This paddle lasted about 3 hours and I went in about 4 miles and paddled back out. The forecast called for storms and lightening but they didn't start until I started to pull off the river. That's pretty much how the whole trip went for me, paddle during the day and lots of rain during the evening and all night. I was happy with that though.

Thursday I caved in to the rain during the day and went to see the Star Wars 3D movie and was happy to be in the dry. Sometimes I take that for granted.