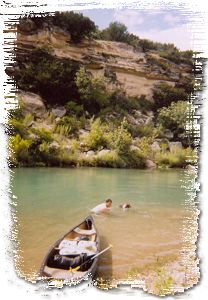 I was very pleasantly surprised to find that the South Llano River was a beautiful and fun weekend canoe trip.

The river is spring fed, so the water quality was very good. The river bed is composed of limestone rocks with only a few patches of solid limestone beds called wagon tracks that can be difficult to run. The character of the river is slow, deep pools with short, shallow, twisting Class I rapids. Banks are lined with a mixture of wildflowers, water lilies, reeds and other typical river vegetation and often were overhung with large pecan trees. The desert character of the landscape was seen in the limestone bluffs and hills bordering the river that are covered with juniper, cedar and cactus. Beautiful scenery.

The river is bordered by private lands with the exception of several miles of frontage at the South Llano State Park and Junction City Park. However, there are plenty of wide, long gravel bars that are high enough off the river to make secure camps. If you do opt for the solitude and freedom of camping on gravel bars, be sure you stay off of the land where the gravel bars end - this is all private.

Other options for weekend paddlers would be to arrange to stay at the state or city park, find a private camp along the river, or plan a series of day trips and stay at either the parks or a hotel in Junction. 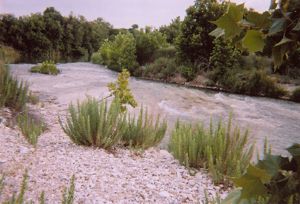 Our original plan was to put in at the second crossing of Hwy 377 and canoe for 3 days down the South Llano through Junction and then down the main Llano to take out at Hwy 385. We used South Llano River Canoes, a very nice family operation, as a shuttle service. They don't have many people who want to camp on the river, so they are not normally set up to shuttle people past Junction. We reorganized our trip so that (on the outfitter's recommendation) we put in at the second crossing but paddled about 3 miles upstream on Day 1 to a waterfall, headed downstream on Day 2 to our put-in, then paddled past it a total of 16.6 miles to Junction where we took out on the morning of Day 4. The trip we did could have been easily done in 3 days - or in 2 days if you left out the our upstream to the waterfall.

We camped on gravel bars, which offer the advantage of solitude, a lovely view and plenty of swimming opportunities. However, we kept our camp small and quiet, picked up any trash we found and tried to leave absolutely no impact. Not only is this good wilderness ethics, but we didn't want to be any cause for nearby landowners to be upset with out camps.

Bugs were practically nonexistant, and the dry sunny days felt downright cool to a Houstonian.

We were hesitant about paddling upstream, but it was not difficult. The current is slow and the rapids are shallow. We easily hopped out of the boat and walked or lined the canoe up each rapid. We aren't sure whether we actually reached the upstream waterfall, but we did reach a picturesque rapid where we set up a nice camp.

The following day, we paddled downstream and immediately ran into other canoes and kayaks out for the day. A 10-mile day on this river is a full one, since the current is fairly slow between rapids. We camped the next two nights on huge gravel bars. Our last two days, we didn't see any other boats on the river except for fishermen tied to the banks. We ended up taking out at the Junction City Park.

Birds were very abundant: Great Blue Herons, Kingfishers, Red-tailed Hawks, ducks, Rio Grande Turkeys, songbirds, deer, and fish under the boat in the clear water. I saw one raccon at night near our camp. 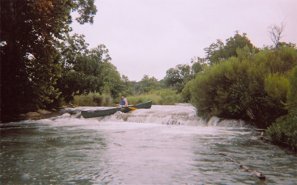 Some of the rapids were hard to scout from the boat, because the river usually turned sharply at the start of them. If we couldn't see in front of us, we'd slow into an eddy and look ahead or even scout on the bank. It's a good thing, because several rapids had downed trees all the way across the river, which could be a hazard if you ran smack into them. The current was slow enough that we could usually muscle out of the midst of rapids if we saw obstacles. However, we witnessed some inexperienced people that flipped their canoe each time they came upon a tree in the river - they didn't appreciate how easy it is to be pinned in a strainer even in a moderate current.

There was a 3-foot waterfall/drop between the second and first crossing of Hwy 377 that wasn't mentioned by anyone. It spans the entire river, and it can be run anywhere in the middle. We watched several canoes swamp at the bottom, but all the kayaks made it just fine. There's a fine swimming hole just beneath it that offered no real dangers, so taking an unexpected swim here is not a big deal.

We had to portage 5 bridges during our 20-mile trip, and since we had camping gear in the boat, it was a minor hassle. But it did give our legs a bit of exercise. There were a few spots where our boat dragged in shallow shoals. Again, it was nice to get out of the boat and walk a few feet to deeper water just to take a break from paddling. I think that the river was a tad bit lower than normal, because most guidebooks don't mention having to walk the shallow areas. A lot of the rock garden rapids would have been more fun if we'd had just a few more inches of water.

I would highly recommend the South Llano as a day or weekend trip. It's suitable for families, and although it provided a few moments of excitement through small rapids, it was what I consider a relaxing trip. The banks are mostly private property, but there was minimal intrusion by riverside development.

From Houston or San Antonio, take Interstate 10 to Junction. Exit Hwy 377/481 at Junction, and then take Hwy 377 South to the put-in at the river crossings or state park.

Rivers and Rapids - Texas, Oklahoma and Arkansas. Nolen and Narramore. 2000.