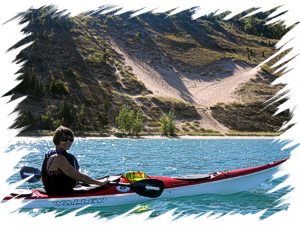 We spent Aug. 27 - Sept. 3, 2011 vacationing at Michigan's Sleeping Bear Dunes National Lakeshore (SBDNL). It was our first time there but it won't be our last. This is a beautiful area with lots to see and do. There are also great kayaking opportunities.

We saw an abundance of recreational kayaks on car tops and trailers throughout the week, but no other sea kayaks, with a couple of rare exceptions. When you read the National Park Service brochure about the area, it doesn't even mention kayaking on Lake Michigan. Compare this to the Apostle Islands, where sea kayaking is recognized as a prime activity. A likely reason is that the two islands of SBDNL � North and South Manitou � require longer crossings than do the more closely spaced Apostle Islands and (I�m theorizing now) officials don't want to encourage kayakers who may be inadequately equipped or not experienced to attempt these long crossings.

During an 8-mile �warm up� paddle on Sunday, we did see four other sea kayakers who were also paddling along the Lake Michigan shoreline, but after that we saw no other sea kayaks the rest of the week.

Monday morning we drove to Glen Haven for our crossing to South Manitou Island for a two-night stay. We parked our car at the Glen Haven beach and made the 8-mile crossing to South Manitou in 2 hrs and 10 min. We were careful to check weather reports before each crossing so we knew what conditions to expect. Waves were generally 1-2 ft with an occasional 3 footer slapping us due to a steady but manageable crosswind. The water between Glen Haven and South Manitou -- the Manitou Passage -- is an active shipping channel for Great Lakes freighters, so we made sure to keep scanning the horizon for the possible approach of a big boat, but none were present during both of our crossings. (We did see one out in the passage during our near-shore paddle on Tuesday.) 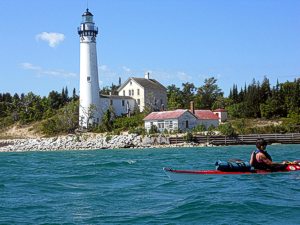 The white tower of the South Manitou Lighthouse was our visual target during the crossing. We had great visibility, but we were equipped with deck-mounted compasses and GPS units in case of poor visibility. Because of a crosswind from the west, we adjusted our heading slightly to the west, and then aimed directly at the lighthouse once we were within 3 miles or so.

After arriving on South Manitou about noon, we talked to a few campers near the pier who were waiting to catch the ferry and return to the mainland with their recreational kayaks. They seemed impressed that we had paddled to the island and complimented us on our "professional" boats � evidently they had not seen sea kayaks up close before. We didn�t find a ranger in the boat house so we paddled to the nearby Bay Campground to scout the camp sites. Earlier in the year when I was planning the trip, I had called the island ranger station to ask about reserving a camp site and learned that only the group sites could be reserved. Individual sites were on a first come, first served basis. This wasn�t a problem for us because there are 25 individual sites and three group sites at this campground and all except one were unoccupied on this beautiful late August weekday. We chose site No. 12 because it has a fire pit and relatively close access to the beach. Drinking water is available at the south end of the camp ground, so we didn�t need to use our UV purifier.

After setting up camp and having lunch, we walked to the ranger station to check in, then set off on a 5-mile hike to check out some of the island scenery, including Florence Lake, the inland lake on South Manitou. Because we had beautiful late August weather with no rain predicted that night, we didn't put the rain fly on the tent so we could enjoy a good view of the stars through the trees. There was also the added treat of a "super bright" flyby of the International Space Station about 9:30 that night. To my surprise, we had weak but workable data cell phone coverage even though we were 8 miles offshore.

After a Tuesday morning breakfast of my famous camp omelets, we paddled about four miles to the wreck of the Franciso Morazan, which has rested since 1960 only partially submerged 500 ft off the SW corner of the island. The winds on that side of the island were steady and whipping up 3- to 4-foot waves, so we weren't able to paddle into the open deck area on the windward side of the wreck, but we were able to view the wreck close up on its leeward side. After returning to our camp site for lunch, we took an afternoon hike to the South Manitou Island lighthouse and enjoyed a guided tour to the top for great views of South and North Manitou and the mainland. There were a few day visitors at the lighthouse who had come over on the ferry, but no other kayakers made the crossing while we were there. Tuesday night we had a brief shower about 1 a.m. which caused me to get up and pull the rain fly over the tent, but the rain didn't last long.

Wednesday morning we got up early in order to break camp and start our crossing before the wind picked up. As it was, we paddled into a strong headwind most of the way back to the mainland. Although the waves were smaller than during the first crossing, the wind made the paddle more challenging. The return crossing took us a full hour longer than our first trip across the Manitou Passage. We were glad to finally arrive back at the Glen Haven beach.

We spent the next three nights at the Glen Arbor Bed & Breakfast in downtown Glen Arbor, a fun location in a great little town that had everything we needed (restaurants, grocery store, ice cream, live music) all within walking distance. The Cherry Republic ice cream and sandwich shop quickly became a favorite. During the remaining days we embarked on more day paddling trips and lighthouse visits. 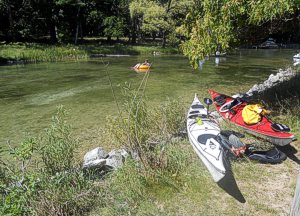 One interesting paddle started with a put-in at a public launch on Thursday on the south side of Platte Lake and then making our way to the Platte River, which winds its way to Loon Lake and on to Lake Michigan. Platte River is famous as a canoeing, tubing, and rec kayaking river, with a couple of different outfitters happy to rent you slow and heavy watercraft. A lot of heads turned that day as we glided by in our sea kayaks. Again, it seemed like people there were simply not used to seeing these types of boats. Despite the �tube congestion� as my wife called it, Platte Lake and the Platte River made for a pleasant � if less than thrilling � 8-mile paddle to Lake Michigan. Upon arriving at the big lake, we unlocked our bikes that we had left there before our paddle trip and locked up our kayaks, then biked our way to retrieve our car back at Platte Lake.

On Friday the wind was strong out of the SW and showers were forecast, so we drove to the protected shoreline of Good Harbor Bay to paddle. We stuck close to the shoreline to avoid getting swept out to sea. After logging a few miles on the water, we drove on to the northern tip of the Leelanau Peninsula to tour the Grand Traverse Lighthouse. We also made a number of stops at wineries in the area, tasting and purchasing a few samples of the local intoxicants.

From kids to grandparents, from couch-sitters to adventure-seekers, there seems to be something for just about everyone in the Sleeping Bear Dunes area. We had a blast

Before our crossing, we purchased a nautical chart at the West's Marine in Traverse City.