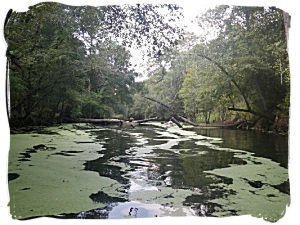 Shelter Creek is a tributary of the Northeast Cape Fear River above Wilmington, NC and is accessed by Hwy 53 which runs East off of I-40. It is a small creek and is mostly tidal which means it almost always has water whenever the rest of the rivers in the southeast part of the state are dry.

There are four sections of this river listed in Paddling Eastern North Carolina by Paul Ferguson but doubt section one and two can be done due to the many trees blocking the river. The section we paddled this past weekend was part of Section 4 and we put in behind Holland�s Shelter Creek Restaurant off Hwy 53. This section runs about five miles before flowing into the NE Cape Fear and we took out after coming into the NE Cape Fear, paddling up river to Whitestocking Boat Landing. If you pull up the NC gauging stations at the bridge on Hwy 53 over the NE Cape Fear you can see the rises and falls of the tide:
waterdata.usgs.gov/nc/nwis/uv/?site_no=02108566&PARAmeter_cd=00065,00060

The tides are not that strong on Shelter Creek or the NE Cape Fear to impede paddling. After putting in behind Holland�s Restaurant, the group included my wife and me in a canoe and the rest of the seven paddlers all had kayaks, we paddled down the creek. It is about 60-100 ft wide at this point and only two cabins within the first mile, after that it is desolate and starts to narrow down to about 30 ft and sometimes paddlers ahead of you, can be seen through the trees as the creek makes 180 degree turns. 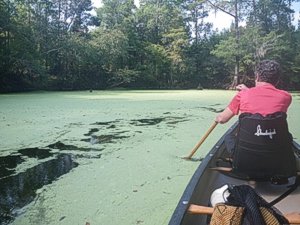 We had duckweed on the water but this did not cause a problem as it was not thick. According to a fellow paddler who proclaimed that, "Duckweed is considered a good plant, not green scum as many first perceived it. Duckweed is the smallest flowering water plant and is very high in protein; some varieties are even consumed by humans in parts of Asia. It is an important food source for waterfowl and some aquatic life and provides cover for juvenile fish and frogs. It does a good job of removing nitrogen and other nutrients from water, which in turn reduces the possibility of harmful, oxygen depleting algae blooms, true green scum."

Approximately three and a half miles we came to a place on river right that was clear enough to pull the boats up for a break, not lunch as we were saving lunch for back at Holland�s. The upper sections of Shelter Creek do not have many places to take a break because of high banks and there is more development.

We soon paddled into the NE Cape Fear and upriver to our take out. This was a short paddle but the main part was just getting the boats wet enough and then come back to Holland�s Restaurant for cold beer, Cajun fried catfish, frog legs, and seafood, as you see our eating club has a paddling problem. This creek offers several lengths of trips, so if you want a longer paddle it is possible. This is an annual trip for our canoe club and particularly when the rest of the rivers we paddle are dry.

From Wilmington, NC travel on Interstate 40 and get off at the Hwy 53 exit going East away from Burgaw, travel about 5 miles to Holland's Restaurant for the put in