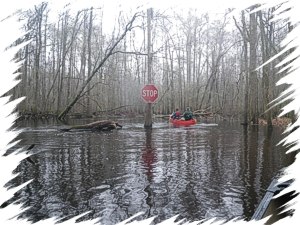 On Friday, Feb 20, 2009, Wayne Charles drove to my house in Salemburg, NC, from Lexington, NC, about a three-hour drive. After loading up his canoe and gear in my truck we headed south down I-95; destination was a weeklong river trip on the Satilla River starting on Saturday, Feb 21 from the bridge North of Hoboken, GA down to Woodbine, GA. However, Friday night was spent with our shuttle crew, my brother and sister in law, Denny and Bev Meece who lived between, Woodbine, GA and Kingsland, GA. What a good Friday night meal at a restaurant called Lucky Dogs, in St. Marys, GA with one-dollar draft beer and all you can eat shrimp, fried, blackened, or grilled.

Saturday morning prior to the shuttle was a must stop in Kingsland, GA at Steffans Restaurant, in operation since the 1950�s and a favorite stop over on Hwy 17 before I-95 was built which continues today, they pack them in. After a good breakfast we were off to the shuttle.

We arrived at the bridge on GA highway 121/15 around 1000 and loaded both solo canoes with our week�s worth of gear. Now let me digress a little. When you travel in a canoe, you can carry everything that the canoe will hold and with a little space left over for the canoeist to sit. I mean everything, coolers, small tables, great food, camp chairs, and everything else that will make the trip comfortable. We pulled away at 1030 saying our goodbyes to Denny and Bev, our shuttler�s. This trip according my addition of mileage from the put in to the take out at Woodbine, GA was 108.8 miles according to the "A Paddlers Guide to Southern Georgia". 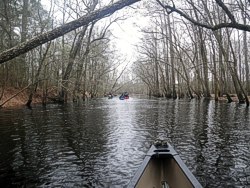 The river in this section was not that narrow, about 100-150 ft but narrowed down and then widened. Around every bend was a nice white sandbar suitable for rest stops, camping or whatever. We did not see our first signs of beaver activity until 4.5 miles, a beaver lodge and gnawed trees. We stopped for lunch after 5.1 miles on a nice sandbar. A lunch for us this week was whatever each of us wanted to separately bring. Wayne was hoping for beanie weenies but mistakenly got pork and beans, so he opted for cheese crackers, while I had hard Italian salami on mini bagels. Bagels hold up nicely for a canoe camping trip as they don�t crush like bread and last longer.

There were no signs of civilization until he hit 9.5 miles and past a community of river houses on the left. Wayne tagged it the Georgia Riviera. After 12.5 miles we camped on river right, set up tents, gathered firewood and cooked our steaks over the small grill along with boil in bag veggies. That night after supper we sat around the campfire telling our usual tall tales and discussing the days events. Wildlife seen on this day was a turkey, deer, hawks, a heron, and egret.

The next day, Sunday Feb 22, I started the campfire and got the coffee on our stove. The temperature at night was around freezing. Breakfast was scrambled eggs and sausage patties. We left camp at 0945. After about five miles, we came upon another river community which I tagged the Redneck Riviera. These shacks were so tacky they were kind of neat. The community looked like the scene out of the movie "Deliverance". We stopped for lunch at mile 18.6 on my GPS. We came to a railroad trestle at mile 28.4 on my GPS, which ran down the side of the river before we actually crossed under.

At mile 29.1 we crossed under the US Highway 301 bridge, which had a nice boat landing, and we camped at mile 29.6. We paddled a total of 17.1 miles this day, better than the first day. That night we had grilled steaks and asparagus tips for supper. That night after turning in you could hear the traffic from the Highway 301 bridge and the trains, but what woke me up more was at 0230 - a beaver was popping his tail in the water every ten yards down from in front of my tent going down river.

Monday, Feb 23, the start of our third day we had a good breakfast of cheese grits and side meat, a typical Southern meal. For those unfamiliar with side meat, it is the side of a pig like bacon but salt cured like country ham and does not need refrigeration. Again another freezing night. We left camp this day and passed a large high bank of about 75 ft high around mile 35.4 and had lunch on one of the always-constant sandbars at mile 36.2. We made camp at mile 45.5 and later had our third grill night consisting of grilled pork steak, Wayne with his regular steak and boil in bag veggies. The third day we paddled a total 15.9 miles.

The fourth day, Tuesday Feb 24, we had a breakfast of a sausage cheese omelet with grits. We left camp around 0950 and came to a railroad trestle at mile 51.7 and the US Highway 82 at mile 51.8 at Atkinson, GA and finally made camp on a sandbar at mile 58.6 for a total of 13.1 miles paddled that day. Supper that night was our final night cooking on the grill and I had pork steak, Wayne had steak and we had boil in bag broccoli with cheese sauce.

Wednesday, Feb 25, we awoke, had the usual fire with coffee and breakfast of country ham with scrambled eggs, the last of the eggs. My ice in my cooler had run out due to the very warm days however Wayne still had ice in his five day cooler. We left camp a little later around 1015 and paddled on. This day was hot close to 70. We stopped for lunch at a sandbar at mile 62.8 and later made camp at mile 68.6. We only covered ten miles today and really had a leisurely paddle. Supper this night was precooked chicken in a bag, which I dumped into a pot with salsa and cooked it and ate over rice, a real simple meal and filling.

We made it to the sixth day, Thursday, Feb 25, had a breakfast of pancakes and side meat. Some places the river was very wide with long straight sections and we stopped for lunch at mile 73.1. We wanted to get to camp early so we could maybe have a bath so we camped at mile 77 around 2 in the afternoon. We only paddled 8.4 miles this day. I put on a pair of swim trunks, as it was hot and went to the sandbar and bathed. The water was cold and later found out it was around 59 degrees. Wayne took a bucket of water and went into the woods to bathe, very modest. We sat around after the baths and enjoyed the sun like it was summer, sipping on a cool beverage. That night Wayne cooked his ever so famous red beans and rice with summer sausage and I took my out back oven and baked a corn bread. We discussed our trip and decided that we could take out time and get out at bridge on Saturday at GA Highway 252 at Burnt Fort, an old Revolutionary War fort, so we did not need to paddle as fast and hard. This take out was in lieu of going to Woodbine, GA as we had encountered wide and long sections of the river with strong headwinds.

Friday, Feb 26, we got up had breakfast of oatmeal with dried fruit in it compliments of Wayne. We left camp at 0940 and had planned to paddle about six miles and camp our last night. We stopped for lunch at mile83.1 on what was to be our last sandbar. The more we paddled the less places to camp. We knew the tides came up to our new take out at Hwy 252 and encountered evidence of the tides before this. Sandbars quickly disappeared and we found no places to camp due to the swamp and or steep banks making it difficult to take out with our gear. A decision was made to paddled on to the Burnt Fort take out. I called my brother and asked if he would meet us there as we were going to paddle all the way to the take out and had scratched taking out at Woodbine. We made the take out which registered 91.2 miles on my GPS. The take out was one of very few public boat ramps we saw on this river.

Overall synopsis of the river was that it is one of the best camping rivers I have ever seen with sandbars at every bend in the river with the exception of the last eight miles above the GA Highway 252 bridge. The river had very wide places, wider than what Wayne and I preferred. Scenery was great with very few developed areas, and we encountered very few motorboats but would probably be increased in summer months. The water was clear, typical of a black water river with a dark tea colored water. We saw more wildlife in the first few days than the last. We were glad we took out early as wondered what it would be like farther down going to Woodbine as far as camping wideness of the river and winds. The Georgia Paddling Guide sections we could not find too easily as far as the listed put ins and take outs; but we did not have the book with us, however some of this book is outdated and mileage figures wrong. We will come back to this river but only to paddle the upper sections.

Downloaded topo maps from Garmin into GPS and used the book, "A Paddlers Guide to Southern Georgia"