by  TPA
A self-supported trip created by TPA 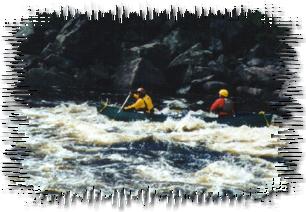 This river flows southeast into Lac St. Jean, Quebec. There is easy road access to a 92-mile section of this river. Strong current, numerous rapids, nice campsites and easy access characterize the river. The gradient remains nearly constant at 5 feet per mile.

We began our trip on August 4. After checking into the registration post on Highway 167, we paid our fee ($6.75 per person/day) and traveled on a dirt road four miles to the take out. Much of this 4-mile stretch is covered with blueberries that were almost ready for harvest. Inquiring about this 1000-acre patch of berries indicated that it is a commercial operation. We left one car at the take out and returned to Route 167. We proceeded 60 miles northwest to km 130 where the river crosses underneath the road. This was out put in. Between these points the river travels 92 miles. The registration post provides shuttle service and assistance on a 1.75 mile portage for an additional fee. A detailed map of the river is available with every rapid and campsite marked. This map is suitable for travel. The scale is 1:50,000.

We slid the canoes in the water about noon. The day included brilliant blue skies and dark rain clouds. The rain would pour for 5 minutes and then the skies would clear. This weather pattern of a 5-minute shower followed by 60 minutes of clear sky persisted during the first two days. We traveled quickly due to the 2-3 mph current. The roar of a rapid greeted us shortly and after scouting the rapid we ran down the left side to avoid large haystacks. We continued to encounter many rapids, class 1 and class 2, until we arrived at a campsite several hours later. Our campsite was surrounded by jackpines and had room for 4-5 tents. Firewood was readily available and we enjoyed a fine meal as skies cleared. We had traveled 15 km. 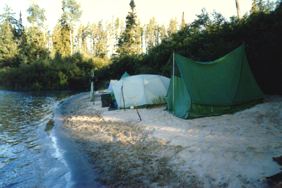 The next day we were greeted with rain squalls again. Between squalls we navigated through many class I and class II rapids. Many of the rapids were quite long and we hopped down them on the inside of the turns close to shore. The water level was very high due to an abundant amount of rainfall in July. A large river entered over our left shoulder (Du Chef) and added more water and current to our river. Fast water carried us along with a slight tail wind through a widening in the river. This flat water section measured about 10 km. A logging road parallels the river for many miles and provided additional opportunities for camping. Soon we arrived at a class 3 rapid which we were forced to portage. The trail was easily located and we were able to shorten the portage by running the top of the rapid. A beautiful campsite was adjacent to large flat rocks extending to the river. This allowed us an opportunity to swim and to cook on the rocks away from the bugs. Our tents were pitched among the trees to shelter them from the wind and rain. The sky cleared for good and the temperature dipped into the 40's during the night. 50 km of paddling with a short portage had exhausted us.

We slept in the next morning and did not leave the campsite until 9:00 am. There were canoe groups both in front of us and behind us. One group of 8 was paddling two catamarans. Four paddlers were sitting in saddles on the pontoons while an aluminum frame stretching between the pontoons supported their gear. They were going slowly in part due to the difficulty of maintaining a straight course. Another group of 8 paddlers had Mad River Explorer canoes with bow and stern airbags, saddles and gear stuffed into waterproof barrels. They were running class III and class IV rapids down the middle. Helmets, wetsuits and lots of flotation allowed these canoes to ride waves that would have swamped our canoes. We traveled 20 km and were at our campsite by noon. This allowed us time to dry our clothes, do a little fishing and watch the other groups go by. Our island campsite, 20 feet above the river on a class IV rapid allowed us an opportunity to watch the other groups make the 1/4 mile portage around the rapids. Some groups portaged the whole rapid; some lined the top and portaged the bottom depending on their skill level. The group with the Mad River Explorers lunched with us on the island while plotting a path through a 12-foot drop. After lunch several in this group ran this drop and were able to eddy out before plunging down the next drop which required a portage for all. 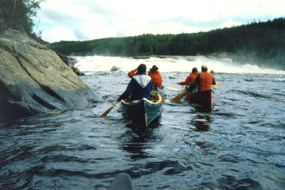 We lined and portaged the next morning a paddled 4 miles to the falls. This is a spectacular falls (Chute de la Chaudiere) which cascades in three sections over a 1.75 mile path. The first drop of 20 feet or more is followed by a half mile of relatively calm water flanked on the right by flat rocks stretching into the water. The next section drops another 20-25 feet followed quickly by the last drop of more than 50 feet. The get around this falls, we took a 150-yard portage around the first drop and then paddled close to shore for a half mile. A road connects Route 167 with the falls and we were able to portage our canoes and gear one-mile along this road. A path off the road leads to the top of the final drop where a shelter, campsites and a privy are located. Viewing the falls from this site is remarkable. The water has drilled large holes in the rock that allowed us to take a warm bath adjacent to the river. We ate lunch at the falls and loaded our canoes at the bottom. We paddled upriver to within 50 yards of the final drop, before risking capsizing from the huge waves that the falls spawned which were careening off the canyon walls in several directions at once. The rapid below the falls featured many large waves. Both canoes took on water and we were forced to bail them out at the bottom of the rapid. Fast water and waves propelled us to our next campsite on a bluff 20 feet above the river. Several times we had to stop and bail out the water from the splash. The cloudless sky allowed us to dry our clothes once again. We found many ripe blueberries at the campsite and added them to our pancakes in the morning.

The next day included 20 km of fast water with a few rapids. In the time that it took to load a canoe the other canoe had floated 3/4 mile ahead in the strong current. We proceeded down the inside curves of the river to avoid the heaviest whitewater. Soon we approached the final rapid. A large ledge on the right suggested a descent along the left. However, four car size rocks guarded the left side and required a series of swift slalom maneuvers. Both canoes followed the proscribed course and took on lots of water in the haystacks. We bailed our canoes once again and paddled the next 5 km. to our takeout. Following the final rapid the river broadens to almost a 1/2 mile wide. A few miles below our takeout the river flows through a small town with a dam. However, it is possible to paddle the additional 20 miles to Lac St. Jean. 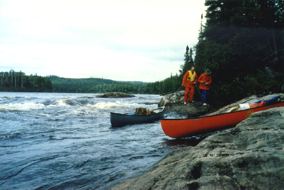 The high water on this trip required us to make 4 portages. Lower water would have reduced this to three. Some lining and lifting over in the top section was necessary. We easily traversed the 92 river miles in 5 days. This allowed us to enjoy the numerous rapids and fast current. Many campsites along the river allow ample places to stop. One is never very far from a logging road, which provides an extra element of safety. There are other access points to the river which can lengthen or shorten the trip. In 1987 I flew into a small lake and followed a stream into the Du Chef River. The 50 miles of the Du Chef above where it joins the Riviere Ashuapmushuan, is characterized by class II and class III water. The ease of access, fine rapids, and stunning river valley make this a river to consider for anyone with intermediate paddling skills.

A permit is required for camping in the park. $6.75 per person per day (Canadian dollars). A minimum of 2 canoes is required to descend the river. This is for safety reasons.

A detailed map suitable for navigating the river is available at the park office.