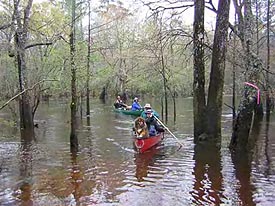 Water, water everywhere and still rising on the Ohoopee River in Georgia. This was the trip this past Easter weekend for a three day two night camping experience on one of the prettiest rivers. Another trip for the �Dumb but Tough� club. Of course, when someone asks me �What is your favorite river?� I reply, �The one I am currently paddling�. Wayne & Lynda Charles, and Myron & Dorcas Whitley and their dog Izzak on this 31.3-mile trip joined Sandy and me. We met on Friday at the US Hwy 1 Bridge, south of I-16 near Lyons, GA. The rains came down all that morning and after we unloaded the boats and gear and put them out of the rain under the bridge, Myron and I made the shuttle to Tattnall Landing, South of the Hwy 280 Bridge near Reidsville, GA. Due to the heavy rain, we missed our turnoff but came back and found the landing, almost under water. Myron decided to park his vehicle and trailer up the dirt road about 50 yards, in case the water came up more.

The water was level was almost 12 ft with a flow of 3500 cfs. Needless to say this was a good current. The first 6.2 miles down to Five Points was beautiful, small with many trees and only one or two cabins. We found a nice lunch spot on river left below a large wooded hill. Five Points Bridge is the beginning of the Ohoopee River Trail in Paddlers Guide to Southern Georgia but this first section is one of the prettiest. Sandy and I were able to catch the sight of five deer on the bank. We first heard them swimming and when we came around the bend they were up the bank and into the woods. We made camp after a total of 9.2 miles around 4 pm. In order to make camp we paddled back into the flooded woods and found a nice place. The evening hours were spent with the usual hors d�oeuvres with mixed beverages and steak dinner. The section below Five Points is a little more developed with more cabins, many abandoned.

Saturday, after breakfast, we left camp at 0945 and made the Hwy 152 Bridge (Cobbtown) after 4.2 miles. From this bridge there are cabins and houses for the first section. We met an Ohoopee Canoe Club member Carson Randall, an expert with a pecan pie cooked in a Dutch oven, recently returned from International Dutch Oven competition in Utah. After Carson�s house there were only a few more houses and the river it to itself with no development. 13 miles after leaving that morning we made the GA Hwy 292 Bridge and finally after a total of 13.8 miles we decided to make camp. The camp was on river right and a nice area, once again high enough in case the rain started back. We expected the rain so we rigged a tarp. Another night of hors d�oeuvres, drinks, and supper, some steak again, but Sandy and I opted for marinated pork chops, broccoli and cheese, and garlic potatoes. Who said you have to rough it camping. It beats MRE�s. Later Myron baked some caramel sweet rolls for everyone. That night around the fire, you can tell this crowd is getting old, as the topic was medications! Around midnight the rains came, and came, and came, along with the thunder and lightening. It slacked off in the morning enough for us to get a cup of coffee and begin making a fire. Of course the only thing that would burn was the fire starter. After about one hour, the rains started again, this time forcing those of us out of the tents, which was everyone except Dorcas, under the tarp. We sat there and drank coffee and tea waiting for it to slack up. Wayne kept going down to the river to check his homemade water gauge and it was rising. One time Myron went down and a fishing bobber came floating up. Myron said that the bobber must have known Wayne, the Bobber King, was in camp. Wayne�s river pastime is retrieving bobbers stuck in trees and trash piles on the river and collected over 100 on our recent weeklong Neuse River trip.

We finally decided the rains would cease so we put up another tarp to give us more cooking space. The omelet competition was on between Myron, Lynda, and me. Lynda is the Omelet Queen. I am not sure what happened to Myron�s, but I know my omelet I used too much egg mix and the thing looked like a huge cake. Dorcas still refusing to come out of the tent, had breakfast and coffee served to her by Myron. The Honeymoon is still on.

After breakfast, we could not wait all day for the rains to stop so we packed in the rain and left camp about 1045. The river changes down to the US Hwy 280 Bridge; going from a little wider to narrow to some places we could not find the channel as the water was running through the woods. We passed a sign on the river that proclaimed Redneck River Park, probably under water. We made the Hwy 280 Bridge 6.7 miles after camp and the river is the widest at this point. Luckily I had Tattnall Landing marked on the GPS so we could find the take out.

When we got close we could see through a hay field in the distance, the boat trailer. When we paddled into the landing the parking lot was flooded and we paddled up the road to the vehicle. It was on the side of the mud road in about six inches of water on the right side. We had paddled, since camp that morning, 8.3 miles.

An enjoyable trip despite the rain on a beautiful river. Other wild life seen was beaver, a brown water snake, heron, prothonotary warblers, hawks, buzzards and other bird. We really did not get a chance to see the whole river due to the high water but it is evident there were nice sandbars as we could see the sand below the tea colored water. We will definitely be back, next time when the water is lower and hopefully no rain. The water has since come up to almost 17 ft and over 9,000 cfs.

Swainsboro, GA has motels and some on I-16. Accommodations on the river were woods camping.

Go East of Savannah on I-16 to exit 90 which is the US Hwy 1 exit, go under I-16 South and bridge is about one half mile. Put in is on left going over bridge.

A Paddlers Guide to Southern Georgia by Bob Sehlinger and Don Otey.

Help from the Ohoopee Canoe Club