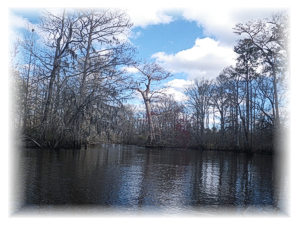 Wikipedia describes the Ogeechee River as a 245-mile (394 km) long river in the U.S. state of Georgia. It heads at the confluence of its North and South Forks, about 2.5 miles (4.0 km) SSW of Crawfordville and flowing generally SSE to Ossabaw Sound about 16 miles (26 km) south of Savannah. Its largest tributary is the Canoochee River. The Ogeechee has a watershed of 5,540 square miles (14,300 km2). The Ogeechee runs its course from the Piedmont across the fall line and sand hill region then across the coastal plain of Georgia. From a shallow clear running stream with several shoals, rapids, and a small falls at Shoals Georgia, below Louisville, Georgia the river becomes a lazy meandering channel through beautiful Cypress swamps and miles of undeveloped forests.

Ogeechee is believed to be derived from the Creek word for "Our Mother". Hernando de Soto crossed the Ogeechee between Sandersville and Louisville on April 22, 1541 during his exploration of the South East part of North America. Archaeologist and Medical Doctor George Pilcher with the aid of the Smithsonian dated Native Indian settlements and burial grounds along the Ogeechee to 8000 BC.

We started our trip on 5 March 2011 at the put in on US 1 in Louisville, GA, which is section B in the Paddlers Guide to Southern Georgia. My brother in law Jim Odum rode with me and Wayne Charles to the put in and unloaded our gear. We arrived around 1030 and soon a light rain ensued prompting up to put on our rain gear. We said our goodbyes to Jim and we were on our way south around 1100.

The paddling guide showed us the river miles we were going to do was 116 miles with the take out on section S, Hwy 119 Bridge outside of Guyton, GA. As if it was bad enough to start in the rain, about 1.5 miles down we had to drag the canoes around a clogged section of the river, no easy task with all the gear we take. We reached McCroans Bridge after 5.1 miles, versus the 3.7 miles in the paddling guide. We found our first night camping spot in the woods at 1550 hrs about 9.8 miles into the trip. The rain stopped and that night we had the usual grilled steak and veggie medley for supper. 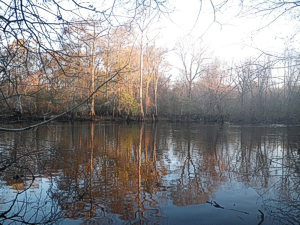 The next morning, 6 March 2011, we got up ate breakfast which I cooked, ham and cheese omelet. Disaster hit when I realized I forgot my coffee cup. Wayne had a small metal measuring cup, which I used for the coffee, just one measuring cup and had to wait for the coffee to cool. It was the size of a small cappuccino cup. We were on the river by 1000.

At mile 11.6 (all distance is from the put in), we had another tree across the river. This time, Wayne and I straddled the tree with our feet dangling in the water and we pulled the canoes across one at a time. At mile 13.2 we crossed under the Hwy 78 Bridge. We reached Cadillac Road Landing at mile 18.0, and stopped for a break around 1352 hrs. There was a small artesian well, Wayne topped off his water jug. At 1538 hrs, we went under the Hwy 56 Bridge near Midville, GA at 23.7 miles and we camped on the right in the woods at mile 24.3. That night for supper we had steak again with broccoli and cheese sauce. That night I figured I needed a bigger coffee cup so I cut the top out of a beer can for the next morning. It seems that every time I camp on the river it is near a railroad and they always like to blow the horns when you are sleeping, like they know you are there and want to let you know they are there also.

Monday, March 7, 2011, I cooked scrambled eggs, fried potatoes, and side meat for breakfast. The beer can coffee cup, held more coffee, but there again the can was so hot I had to wrap a paper towel around it. We packed up and left camp around 1000 and stopped for lunch at mile 30.3. At mile 34.1 we passed under the Herndon Bridge, State Road 1320. This was probably a railroad town as there was an old passenger car, early 1900�s made of wood that someone converted to a cabin. Of course it was in bad shape. At 1430 hrs, we passed Bull Hole Landing, mile 35 and at 1630 hrs, made camp on the left at 39.1 miles. That night�s supper we had bbq pork chops and veggie medley. Train blowing again this night.

Tuesday morning, March 8, 2011, breakfast was instant oatmeal, raisins and spice and a pecan roll and coffee out of the beer can, for me, and Wayne cooked his real oatmeal. Since I did not cook a big breakfast with cleanup, we were on the river at 0854. This day we saw some real wildlife, an alligator and some wild hogs. Up to now we only saw bird life and a million ducks. At mile 49.9 we stopped for lunch at 1240 hrs and passed under the Hwy 25 Bridge, near Millen, GA at 1339 hrs at 51.1 miles. We made camp on the right in the woods, mile 57. Supper that night was grilled pork chops and broccoli with cheese sauce.

9 March 2011, Wednesday, breakfast for me was light, a granola bar and coffee and Wayne had his usual oatmeal. We left camp at 0830 and at mile 62.4 we reached Scarboro, GA, where there was another big artesian well, where we both topped off our water jugs. This day was really windy but no portages. We had seen another gator this day. At 1400 hrs, we reached the Rocky Ford Bridge at mile 69.2 and at 1530 hrs, we camped on the left, mile 72.7, a good day�s paddle. That night Wayne cooked his chicken, teriyaki rice. We knew it was going to rain so we set up our tarp and when we were getting ready to eat the rain came. It rained and wind blew all night.

Thursday, March 10, 2011, breakfast was instant oatmeal, pecan roll, and coffee and Wayne had his real oatmeal again. I had found a small rubber cup at Scarboro the previous day and washed it and used it for coffee. Better than the beer can but not as big. A light rain was falling and after packing in the rain, we bailed out our canoes, packed and on the river by 0900. We paddled in the rain and crossed under the Ogeechee Bridge (section L) at mile 77.9 and stopped for lunch at mile 83.3. We crossed under Hwy 301 Bridge (section M) at mile 83.9 and at mile 92.1 we made camp in the woods. This day we saw otters, turkeys, and deer. I cooked supper that night of red beans, rice, with summer sausage, with wheat bagels. Train whistles never stop. 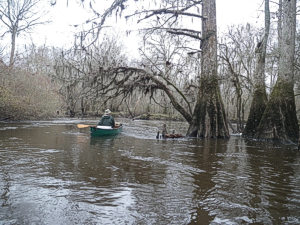 March 11, 2011, Friday we had oatmeal and pecan rolls for breakfast and were packed and on the river by 0830. We paddled down the river and saw three otters and then about 15 turkeys. At 1107, we crossed under the bridge at Hwy 24 near Oliver, GA, mile 101.3. We finally made it at least 100 miles. At 1145 we stopped for lunch at 103.4 miles. The lunches we were on our own, Wayne always, and I mean always, eating beanie weenies, canned fruit, crackers and A&W Root beer. I had either Vienna sausage, or beanie weenies, or wheat bagel with summer sausage, and also ham salad and crackers or tuna salad and cracker made by Bumble Bee in a little lunch kit, pretty good. At 1530 hrs, we stopped to camp on our last night at 114 miles. This day the only wildlife we saw was a deer, of course the usual birds, herons, hawks, kingfishers, other birdlife and a million ducks again. That night Wayne cooked chicken, with broccoli fettuccini.

The last day, March 12, 2011, breakfast was a pecan roll, coffee for me and Wayne had his usual oatmeal. We left camp at 0834. Around 1210 we crossed under the last bridge and our take out at Hwy 119 around 1215 hrs. My wife and her sister who were staying five miles away in Guyton, GA were there to pick us up. The total miles was 126, considerably longer than the 116 miles the paddling guide has, but there were times we could not tell if we were on the right channel as this river is so braided. There were so many huge cypress trees, more than I have ever seen on the river and it was relatively free of trash. Early on we had some portages but none after the second day although we were lucky to either go around some or through the branches of some trees. There are sections that are desolate and then some developed sections with every type of cabin, some really nice and some shacks. Wayne did not think Georgia joined back in the Union after the Civil War as there were so many rebel flags at these cabins.