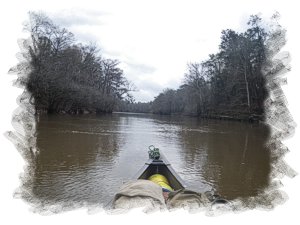 I left home on Thursday, canoe and gear loaded heading to Harry Shaw's house in Hamlet, NC about 2 hours away and was to meet Wayne Charles from Lexington, NC, there with his truck and canoe trailer. The three of us headed out for Little Ocmulgee State Park, in GA for the first night stay in one of their cabins. The next morning we drove to Jacksonville, GA to meet our shuttle person, Guy Bland, who shuttled us up to Hawkinsville, GA for the put in. The Hawkinsville, GA put in is a nice boat ramp and easy to load up the canoes. We were off on the river at 1000, three solo canoes headed down the Ocmulgee River. A description of the river can be found here on Wikipedia:
http://en.wikipedia.org/wiki/Ocmulgee_River

The name of the river probably comes from a Hitchiti words oki, "water", plus molki, "bubbling" or "boiling". To us Ocmulgee meant river of huge alligators as we saw some big ones and then one hugenormous one! The Ocmulgee River is one of two tributaries of the Altamaha River which empties into the Atlantic Ocean. The other river being the Oconee.

The first day March 2, 2012 we only paddled 14 miles and found a nice place in the wood with a little sandbar to land on for our first night camp on river left. The day had been sunny but windy and the water level was about 3.5 ft and 2500 cfs at the Hawkinsville, GA gauge the current was flowing pretty well

We had seen two nice size alligators on an island that day. That night for supper we grilled steaks and a veggie side. That night rain started falling about 9 pm. 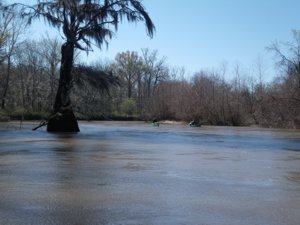 Saturday, March 3, 2012
We awoke to a light rain off and on and had a light breakfast of coffee and we packed up, headed out. It rained all day while we were paddling and had to stop and bail our three canoes out several times. We encountered a wild pig with his ears and nose stuck out of the water swimming across the river. As soon as he saw us he turned and returned back to the bank he had left.

After 30 miles (distance is from the put in on all miles) we found a place to camp and set up a tarp for the kitchen area and to store most of our gear. When the rain subsided a little we set up our tents and started the charcoal for the grill, that night it was steak and me with a pork chop. We were able to get a small campfire started in the rain but decided it was too rough to sit around the fire, we were in bed early.

Sunday, March 4, 2012
We awoke to clear skies. The rain had stopped about 0130 after about 30 hours straight rain. We all had a light breakfast that morning and headed out. After paddling a total of 37.7 miles, we crossed under the Hwy 280 bridge and then under a railroad trestle after 39.5 miles. The day had been sunny but very windy.

We had seen the granddaddy of all alligators that day who would not be intimidated by us to go off the bank into the water. He was probably older than us and said "if you want me off this bank, come and get me." We made camp after a total of 46.9 miles on river right. That night we had our last grill out night as each only brought one small bag of charcoal. We sat around the campfire telling stories and half-truths.

Monday, March 5, 2012.
Another sunny but windy day. That night we heard a pack of coyotes howling near our camp and then later some turkeys were heard in the woods. For breakfast I had side meat and scrambled eggs. We packed and left camp around 0925. We stopped for lunch after going 56.9 miles which was across from Dodge Lake Landing.

We had seen some more alligators today and some Wart Hogs which were actually two USAF A-10 fighter jets flying low over the river. We had seen an osprey and an anhinga or snake bird. We made camp in the woods on river left after 68 miles total for the trip. That night for supper I cooked some Knorr pasta sides; Mexican Rice with summer sausage hunks. Another nice campsite and also another nice campfire.

Tuesday, March 6.
Breakfast today was raisins and spice oatmeal with a honey bun and coffee. After breakfast we all packed up and headed down the river. We crossed under the Hwy 319 Bridge at mile 79.1 and paddling again under a sunny sky but with winds we camped on river right on a sandbar after 82.4 miles. That night Wayne cooked him and me supper consisting of chicken flavored rice with small broccoli pieces and some chunk chicken. I think Harry had his usual Mountain House dinner. That night clear sky and the moon but almost at its full stage. 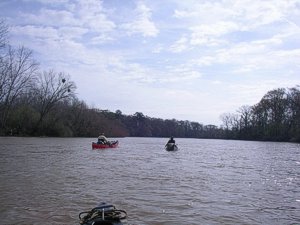 Wednesday, March 7, 2012.
Coffee, the usual morning drink and a honey bun was the fare for breakfast for me. We left camp that morning and at mile 87.9, my GPS had a creek Rocky Creek coming in from the right however the GPS had the main river going left. More flow was going right but we went left. The river narrowed down to about 50 ft rather than the usual width of 200 ft but we were out of the wind. We surmised that the river ate away about a mile of Rocky Creek because soon we were back to the wide Ocmulgee again. Not sure of the dates of my maps in the GPS but if this happens go right on Rocky Creek as this is the main channel. Also on my GPS, a Garmin GPSMap 60CSx, there were several places where the channel went right or left and we looked like we were paddling on dry land where the oxbows had filled in. The same thing happened on Wayne's GPS a newer DeLorme model.

This day we saw a swallow tail kite bird and Harry marked the position to report the sighting. We passed by a place called Rocky Hammock after mile 95. We found a nice camping place on river right, our last night after 102.7 miles. There was a road running into the place however it did not look like anyone had used it for a while. For supper that night I had eggs and side meat. We sat around the campfire, taking in our last night as we figured we could make the take out by the next day. The moon was a full moon tonight.

Our last day: March 8, 2012.
Breakfast was oatmeal and honey bun with the much needed coffee. This morning the tents had a heavy due and we waited for them to dry as much as possible. Later we packed and headed down river. Beautiful sunny day with light winds. Around 1100 we stopped at Murdock McRae's Landing to call our shuttle person, Guy. This landing was at mile 108.6 miles. Guy had told us this was about 4 miles from the take out. At this landing there is a marble maker detailing the last log raft of pine logs floated down the river in 1982 was to commemorate of the log rafts of the 1800's. This was 140 miles from this point to Darien, GA where it ended and took about 20 days. We soon were on the river paddling down to the take out at the Hwy 23 Bridge in Lumber City, GA. On the way there I saw four small wild pigs running down the edge of the river.

We arrived at our take out at 1220 and waited in the shade under the bridge. The take out is a public boat ramp at the bridge and nice. Total miles for the trip were 112.2 miles. The river level had risen to 6.7 ft at the gauge and 4500 cfs.

A great trip, although a wide river, lots of wind but fast current. We saw all kind of bird life, many red shoulder hawks, many egrets and heron and other wildlife already mentioned. The last 50 or so miles were more scenic than the first 50 miles, more bluffs, and more sandbars which did not show evidence of campers as they usually do. After the first day, Harry made it the rest of the trip in flip flops, brave man. We finally made it back to NC around 815 pm that night and I was home to a hot shower and nice bed by 1030 pm.

A nice to place to stay prior to or after the paddle is a cabin or lodge at Little Ocmulgee State Park.

DeLorme Georgia Atlas, and a Paddling Guide to Southern Georgia