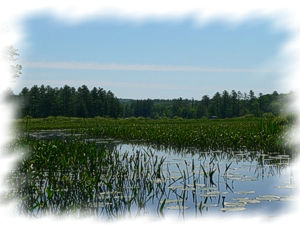 Access to Merrymeeting River is directly off Route 11, a few miles south of Alton. Keep a close look out, as the entrance is hard to see. You'll launch from a dirt ramp that is somewhat difficult for kayaks if, like me, you dont want to get your shoes wet (only because it makes a mess inside the kayak). Seconds after departure you're in a wide open marsh, with the river wending its curvy way amongst fields of water lilies and other vegetation. The deep channel is fairly wide, so later in the year it should still be navigable. Since the Merrymeeting is a big marsh there are no trees to provide shade, so if you go on a hot summer day be prepared. If you want shade try the nearby Suncook River in Barnstead.

The advantage of the Merrymeeting is that it provides almost endless paddling for a day trip. The river goes for miles, as does a feeder, the Coffin Brook. It is also quite wild, with no houses and once you get away from the ramp, and no traffic noise. If you follow the Coffin Brook there are plenty of inlets and shallow areas to explore and it is easy to get lost because one bit of swamp looks a lot like another. This leads to the disadvantage of the Merrymeeting - it is fairly monotonous. Still, there are plenty of things to see.

Not long after launch I was coasting along and a snapping turtle glided right under me. Being new to the region this was my first sighting of the legendary beast and it made me jump. Later on I saw another and the river banks are lined with their nests/egg caches so you can expect to see one or two if you look carefully. Fortunately the water is crystal clear and if the sun is right you can see four or five feet down. A passing fisherman said he was after bass and pickerel if you care to do some fishing. 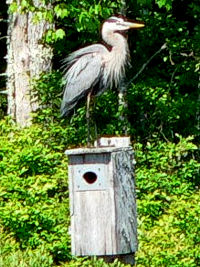 Bird-wise the marsh is full of the ubiquitous red-shouldered blackbird. I also saw an eastern kingbird and in the distance a great blue heron. Apparently all navigable waterways have to have at least one heron in residence, since I've seen one on every body of water I've ever been on, from Californian reservoirs to England's canals. Oddly there were no ducks or geese. I saw nothing mammalian but there were several beaver lodges and several fairly obvious places where deer and such came to drink, so if you arrive early and are patient, you'll probably see something. Personally I'm not much of an early riser. Ask my wife how patient I am.

Access to Marsh Pond is a few miles north, through the town of New Durham. The map in Quiet Water shows access at the bridge, but there really isn't any. There is parking and a dirt ramp at the far north of the pond. Immediately on launch there are interesting things to see. Directly across from the ramp is a small marshy area with typical marsh denizens. The pond is quite shallow for most of its extent. 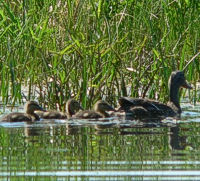 Venturing south you'll find plenty of marsh grasses, water lilies and other vegetation, with shady trees covering several areas. I found a mother duck and some ducklings flitting amongst the grasses on the east bank, while a blue heron perched for a picture on top of a bird house on the west bank. On the drive up I noticed a large flock of Canadian geese, which unfortunately had departed by the time I got there in the kayak.

Further down there is a large side pond pointing west that is lined with water lilies. There is a deep channel that can be followed for quite a ways until it terminates at a beaver dam. South of the bridge the current picks up and the deep channel widens. On the west bank there are houses and shade, but to the east the marshy area continues with more inlets and wildlife. I got about half way down before turning back.

In summary the Merrymeeting is a fine marsh experience, but marshes aren't for everybody. Marsh Pond is probably a better overall experience, although there are some houses and some traffic noise from the road.