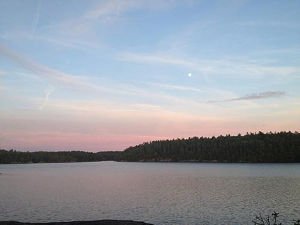 I did this trip with my brother-in-law back in 2015.
Before-hand, we booked all three sites online and paid via credit card on the Ontario Parks website. The Ontario Parks reservation system is a very convenient way to book and plan trips at the Massasauga Provincial Park.

Day 1:
Left Georgina around 7 am and had some Tim's on the way up. We got to Oastler Lake Provincial Park to pick up firewood, canoe and our permit around 10:00 am. We were on the road again around 10:30 am and arrived at Three-legged Lake access about 15 minutes after departing from Oastler Lake. After unloading our car I drove back about 500 meters to the designated interior parking spots. Be sure to display your vehicle permit on the dashboard of your car if you are parking here. After a short walk back to the put in spot from the parking area, we loaded up the canoe and we were off!

Three-legged Lake can get windy and wavy at times, but not this day! It was bright, sunny and fairly calm when we put in. It was a couple of kilometers to our first portage: Three-legged Lake to Spider Lake � (370 m) where we stopped to have a sandwich and a smoke. The portage gets fairly steep in one part and the last 100 meters or so can get very muddy depending on recent rainfalls but it is a nice, easy portage that usually takes me two trips to get everything to the other side comfortably.

Had another smoke and loaded the canoe back up and we were off again! We tried a short cut we hadn't tried before and it worked out well. Then we tried another one; it did not. We had to get out of the boat and walk the canoe back through the path we had made (all the time just imagining the leeches that were probably clinging to me). Fortunately, we got out and no leeches. Paddled through some fairly calm waters until we reached the interior of Spider Lake (south between campsites 12 and 19) where the waves started to pick up a bit. In my experience, this area of the journey is always a bit windy/wavy but it is manageable if you stay close to the shoreline. The few times I've been here, the waves are coming in from the west so they hit you from the side which can make it difficult to steer the canoe at times. Once you get near campsite 19, it gets calm again and it's a beautiful paddle through the narrows to our first campsite � Spider-Clear Lake #21. According to my tracker it had been 3 hours and 13 minutes since we had left the launch site.

One thing I've noticed about this park, is that the sites are usually very well kept. Most campers in this area seem to be respectful and tidy up after themselves. Getting out of the canoe here can be a bit tricky as the rocks are sometimes slippery but we managed just fine. Once we had the tent and our equipment set up, it was time to make some food and get a bit of whiskey into us. There were lots of bugs out but bring some good bug spray and they leave you alone (usually). The only real problem with this site is that there isn�t a huge amount of room for a tent. We brought a 4 person tent so we had enough room for that�but anything bigger and you might have to look a bit harder for a tent pad. After a few back country whiskey sours (Filtered water, whiskey and Mio Squirt Lemonade flavour) and some pasta with meat sauce, the rest of the night gets a bit hazy but there was definitely an evening swim and some unsuccessful fishing. 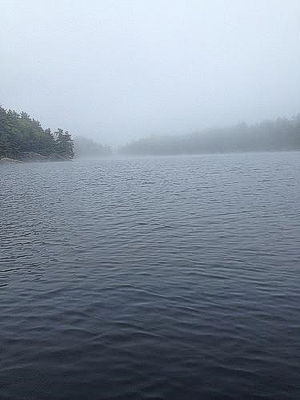 Day 2:
We woke up to a very foggy morning and had a quick breakfast of bacon, eggs (liquid, from a carton), some hash browns and oatmeal. It was a good start to what we expected (and definitely was) our most challenging day. After we packed up camp and loaded up our boat it was time to say good bye to Spider-Clear Lake #21 and head off through a very nice narrow channel with steep granite cliffs on either side. The warden came by when we were going through this area and stopped for a chat to ask us how we were doing and if we�d caught any fish. I've run into the Wardens a few times here and they're always very friendly and chatty.

Out of the narrows we came to our first portage: Spider Lake to Clear Bay (780 m). As soon as we landed it begun to rain slightly and the mosquitos were out in full force. Again it took us 2 trips to get to the other side of the portage which was muddy and buggy. At the last leg of this portage there is a steep descent, which is covered in tree roots making it very slippery during or after a rainfall. We took extra caution in this area and tag-teamed the canoe down this stretch of the portage. Once all the gear was at the other side (including the remaining 2 bags of firewood) we loaded up the canoe, swatting at mosquitos the whole time and headed out into Clear Bay where the mosquitos thankfully didn't follow us.

It was a very foggy, uneventful (but beautiful) paddle to our next portage: Three-finger Bay to Gooseneck Bay (235 m) and words can�t describe just how absolutely ridiculous the mosquitos were at this portage. We almost ran our gear to the other side (two trips), loaded up the boat, hopped right in and away we went. After a very short paddle we got to our next campsite: Gooseneck Bay #610. It had been 3 hours and 43 minutes since we had left our last campsite at Spider-Clear Lake #21.

It was raining moderately while we set up camp, but it started to taper off after about an hour and we were able to get a nice fire going to warm us up a bit. Someone had left a ton of dimensional lumber end cuts at this campsite, which saved us some wood (or at least prolonged the length of time our fire was lit for). A great dinner of fire-grilled sausages led to a number of back country whiskey sours and an early bed time for both of us.

Day 3:
A quick breakfast of oatmeal and some fruit was the start of this day's journey. We took our time packing up this morning as the days paddle would be pretty short any way. Hopped in our boat and went through a stretch of narrows followed by an open, windy part of Spider bay to another stretch of narrows with tall grasses growing on either side. It was swampy, but very pretty and surprisingly the bugs were not too bad.

At our next portage: Spider Bay to Spider Lake (100m) we hopped out of the boat and noticed there was a lot of poison ivy right at the landing spot. Thankfully, neither of us were hit by it. It was a very short, easy portage to the other side where we sat around for a bit and had some water and a smoke or two. This was probably my most favourite portage of the trip; besides it being short it was also kind of pretty.

After our little break we hopped back in and paddled against the wind to our next campsite: Spider-Clear Lake #16. Today's paddle including portage took us only a meager 2 hours and 29 minutes so we had lots of time to play at what would quickly become my favourite campsite of the trip.

Perched high up off the lake, Spider-Clear Lake has a beautiful view of the lake and surrounding forests, as well as a great view of the moon coming up. Since this was our last night we had a lot of eating to do if we were going to finish up all the food we had brought. We had some Mr. Noodles, granola bars, a few apples and some beef jerky which filled our bellies enough for us to feel like having, again, some back country whiskey sours.

After a few whiskeys we went fishing and caught absolutely nothing but it didn't matter, we were having fun!

Dinner consisted of some awesome home-made chili, and more back country whiskey sours which ended up causing me to almost fall asleep at the picnic table. But I got a second wind so we lit a fire and burned our last bag of wood. We also ended up grilling the last couple of smokies until it was time for bed. 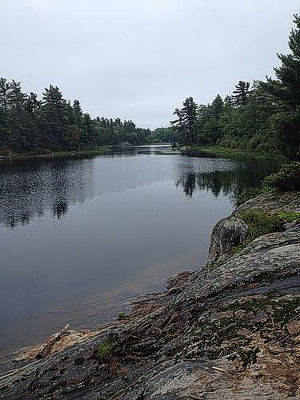 Day 4:
We awoke to a beautiful sunny morning and had some oatmeal, fruit and more Mr. Noodles to tide us over until we reached the take-out point back at Three-legged Lake access. We packed up our boat, and headed for the take-out spot.

We had to do the first portage again, Three-legged Lake to Spider Lake (370 m) this time in reverse, and it seemed a lot shorter than the first time we had done it this trip. Then again, we also didn�t have 3 bags of wood to lug across it, so that probably contributed to feeling that way. The portage got pretty busy toward the end, but this portage is the main Northern access point to the park, and even on a good day it's fairly common to see 2 or 3 groups there.

Once we were at the other side a quick smoke and we were out of the park and headed to the take-out. A fairly wavy paddle brought us back to Three-legged Lake access point just in time to see a group of about 15 people heading out on a week-long trip. They didn�t have much respect for the access point etiquette (which is clearly outlined via signage) however it didn�t really inconvenience us a while lot.

Grabbed the car, loaded it up and off we went to go return the canoe.

Every year, I try to make it to Massasauga at least once. It is an easy area to navigate, not too isolated and can be done in a few days or a week. It's a pretty place with some okay fishing spots (except for this year) and don't forget to check out the Geocache on Spider Lake!

End of Three-legged Lake Road is the drop-off.

Don't forget to pick up your permit from Oastler Lake Provincial Park on your way in, located on Oastler Park Drive.