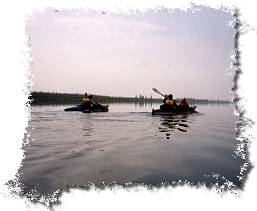 Don't be too intimidated by the long distance and isolation of this trip. The total length from Ft. McMurry to Tuktoyaktuk NWT is 2000 miles or 3500kms long. I had only been on no more than a few 4-day paddle trips prior, and none were solo like this route. With safe planning and common sense this would be a great paddle solo as well as with larger groups. During the route one passes thru 13 villages all containing a store to obtain food. But I would recommend either sending it up ahead or going totally self sufficient as I did. The prices in these towns are shocking as I saw such items as Kiwi Fruit for $4.19 for 1! And $9.00 for a red pepper. The Atabasca is a very historical river once paddled by the Hudson's Bay and NorthWest Company in the 1700's and 1800's. I encountered many historic areas including Ponds Fort established by Peter Pond in the late 1700's.

I encountered an old cemetery in which the graves were eroding into the advancing river. I found the Athabasca River to be fairly fast moving but was very silty and full of geese droppings. I had a difficult time filtering drinking water for this reason and found very few side streams. I would recommend taking a few jugs of drinking water to get you to Lake Athabasca. There are plenty of cabins along this stretch where one can get some drinking water from the friendly Canadian people. The weather can be very hot and the days filled with biting horseflies.

During the summer months it is possible to easily paddle at night to avoid the heat and flies and a better chance to see bear, wolves, moose, and deer roaming the shorelines. It took me about 4 days to get to Ft. Chipweyn on Lake Athabasca. I paddled long hours but one could easily paddle 6-hour days and arrive in under a week. There is an airport in Ft. Chip if you decide to end your trip there. Ft. Chip is very historical with a great museum about the fur trade days. Believe it or not you can get Kentucky Fried Chicken in this village with no roads.

The next section is the Slave River with its rich history. Make sure you stop at Peace Point to ponder what Alexander Mackenzie was thinking as he stood here over 200 years ago wondering which way to paddle. There is a dangerous weir that was installed a days paddle out of Ft. Chip but can be easily portaged. Midway down the Slave you will encounter Ft. Fitzgerald, which is the beginning of the famed Rapids of the Drowned. This is a 17 mile section of class V rapids which I happily did not paddle as I felt it too dangerous being solo. They can be run and portaged thru a little research as to the correct route. There are several homes here where one can get a shuttle below the rapids for a few bucks.

The Slave is such a quiet and slow moving river. I rarely saw anyone including wildlife. It felt great to be isolated from the rest of the world. There are plenty of islands with tons of firewood to camp along. The Slave eventually empties into Great Slave Lake near Ft. Resolution via a short cut to the lake. The south shore is very warm due to the shallowness to. A good place to wash the grim off your bodies. I camped right smack in town on the public beach and was not bothered by anyone. The people were all friendly and curious as to where I was heading. Ft. Resolution does not have much. There is a Bay store and a small restaurant if you need your junk food fix. Make sure you check in with the RCMP.

From here the south shore of Great Slave is very beautiful with nice polished rocks and piles of driftwood for a campfire. I paddled within a 100 yards at times from shore so I could watch for wildlife and also for safety reasons. I managed to have a wind at my back one day so I rigged a sail that sent me cruising for 6 hours in which I covered nearly 50 miles. It was my first sailing experience! This lake can blow up some big storms rather quickly as I encountered one in Hay River. I had to make a quick decision to get to shore as huge waves and strong winds tore thru the area for the next couple of days. I was in walking distance of the town of Hay River where I happily did some much-needed laundry and scarfed down a pizza. Hay river is one of the largest towns you will encounter and it has all the things you need. The weather finally broke one evening and I paddled out into the sunset and a full moon. I paddled all night in the glassy lake with great temperatures and very few bugs, just the ripple of my canoe cutting thru the surface.

I finally arrived at the MacKenzie after almost three weeks. I enjoyed the strong pull of the river and looked forward to it carrying me to the Beaufort Sea another 1300 miles away. The Mackenzie is a very big river and I recommend staying closer to shore as wind can kick up in seconds and you would be in trouble. I often stayed within a couple canoe lengths of shore. This was much more fun as you could watch bald eagles sitting high atop a tree scouting for its next meal. I encountered many black bears along the river. Many seemed as if they were sunning themselves as I rounded the bend. Many would not move as I passed within a few yards. The river in spots is almost 4 miles wide so it's important to stay close to shore. I witnessed sudden windstorms that kicked up waves well over 10 feet high.

I witnessed numerous forest fires along the ways. Sometimes the smoke made it impossible for me to see the end of my canoe. At times I would see a barge appear out of the smoke heading right for me. These barges deliver food and supplies to the villages, as there are no roads to them.

Near Tuleta or Ft. Norman I encountered the "Smoking Hill" which Alexander Mackenzie encountered 200 years prior. This area is an exposed vain of coal which has been burning for centuries from a lighting strike. Above Ft. Good Hope I encountered the Ramparts, which are huge limestone cliffs dropping off right into the water. This is very beautiful with its yellow and golden colors with the backdrop of blue sky. A few weeks later I arrived at Ft. Good Hope, which is a native village with very few whites. I camped high on the bluff across from the church, make sure you get a hold of the RCMP to let you into the church as it is breathtaking inside. There are original fresco paintings from the missionaries that built the church in the 1800s. The colors are a sensory overload but must not be missed. After several weeks of peace and solitude I arrived at Inuvik in the Mackenzie Delta. Inuvik has a population over around 3 thousand. It was a cultural shock for me after paddling for 6 weeks to see this town. I found it a good place to do laundry, eat musk-ox burgers or caribou, and plan for my trip home.

A few days past Inuvik I entered the delta. It was beautiful as I was now beyond the tree line. All that surrounded me was tundra and rolling hills as far as the eyes could see. Paddling into the ocean was a thrill. I finally felt like I had reached my goal. The ocean lay in front of me not far from the polar ice caps. I encountered an old Inuit burial ground where the ground was littered with the skeletal remains of many. Since the ground is permanently frozen that far north, the dead were buried under piles of driftwood, which have since decayed, leaving an eerie site. As I approached the Inuit village of Tuktoyaktuk I encountered several Pingos, which are ice mounds covered by vegetation. They are the only hills in sight. Tuk as it is known is very similar to a third world country. Very dirty streets and dilapidated homes. I made arrangements to have my canoe shipped to Calgary from NTCL in Tuk, which runs the barge company the entire route. It only cost me about $90 dollars to get it to Calgary where I picked it up a month or so later. 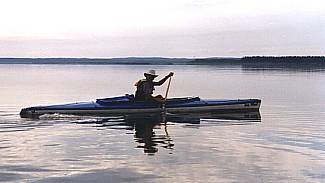 If you want an extended trip without many difficult water conditions, I recommend this route not only for that reason, but its historical significance. Novice canoeist with common sense and knowledge of basic water and paddling skills could easily do this route. The entire route took me almost 7 weeks to cover but I was under a time limit. Most people would want to take more time. You would not have to do the entire route either, but do sections of it as there are access points all along at the many towns. But if you are looking for a trip of a lifetime, scenic beauty, solitude, wildlife, history, and wonderful people I highly recommend it.....Happy Paddling!!!!

* Notice to paddlers. A section of the Slave River containing the famed Rapids of the Drowned is a class V section of whitewater which is extremely life threatening. I personally had someone drive me and my canoe around this section as I felt I did not have adiquate information as to where the portages were around each rapids. BUT, with research, they can be navigated and portaged in a couple of days. There are numerous people in Ft. Smith that run it on a regular basis that could provide information but I do not have any contact numbers for you.

ALSO: Slave River approximately one days paddle downstream from Ft. Chipweyn is a weir which is life threatening. This weir has since been installed since the topo maps were made. There is an easy and safe portage near it and one can obtain detailed information at the Wood Buffalo National Park in Ft. Chip or call 403-872-2349

I paddled a solo expedition canoe by Verlen Kruger called a Sea Wind. Its 17 ft. and 55 pounds and is great in all water conditions and stable.

No fees or permits, but the RCMP require you to fill out a trip report and check in with them at every post enroute to ensure your safety.

Put-In: Ft.McMurry is about a five hour drive north of Edmonton Alberta. Take highway 2 to Highway 63. I started from Salt Lake City and it was a long 25 hour drive.

Canoeing Canada's NorthWest Territories by Mary McCreadie, this has a list of all the topo maps on the Slave and MacKenzie Rivers. For the other topos of the Athabasca River contact Canadian Map Distributor at 1-800-214-8524. Or Canadian Map Company @ 416-362-9297. I used a total of 55 maps, which included detailed Navigational Maps that one can also purchase from above numbers.

Read: Alexander Mackenzies Journal of his 1789 paddle of this route:(He was the first) It provides a great deal of historical information and interest. Also read any books you can find regarding the history, people, land, geology of the route to help you learn more about it.

"The Mackenzie- Yesterday and Beyond" by Alfred Aquilina also.