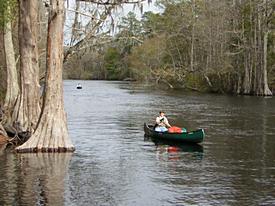 The Lynches River in South Carolina actually starts in North Carolina, in Union County below Monroe, NC, but for all practically paddling purposes does not begin until around Bishopville, SC. The 1986 "Paddling South Carolina" guide starts off section 1 at Lee State park between Bishopville, SC and I-20. We began our trip on Hwy 15 right outside of Bishopville this past Monday, June 8.

When I say we, I am referring to Paul Ferguson, author of "Paddling Eastern North Carolina", Muskie Cates, Johnny Randall, and myself, Don Meece. The trip started out with me meeting Paul at the Lynches River County Park below Florence, SC off Hwy 52. The park used to be Lynches River State Park, and is a nice park with campground, cabins, nature trails and is right on the river. I was early so I drove around the park and talked to Joe Ross, Superintendent, as he had agreed previously for a vehicle to be left at the park for the week.

I met Paul around 1015, and after loading my canoe and gear on his van we were off to the put in on Hwy 15 about an hour away to meet Muskie and Johnny which we did around 1130. They had Johnny's Blue Hole tandem canoe all ready loaded and were waiting on Paul and me. We unloaded our canoes and started piling in the gear. One thing good about a canoe is you can take as much stuff as the canoe will hold, which means most of the comforts of home. Well at least a big cooler, tables, chairs, and plenty of food. Of course Paul paddles a Mad River Explorer tandem canoe solo so he has way more room for cameras, tape recorder, a big camp pad bigger than the mattress on my bed at home, and a huge cooler almost half the size of my refrigerator and filled with more brew than my refrigerator. My kind of man.

We were finally off by almost noon and paddled down the narrow river with lush vegetation and trees on each side. After about an hour we found a suitable small sandbar for lunch and then paddled on. We passed by Lee State Park, now called Lee State Nature Area, after 7.5 miles and several miles later paddled underneath I-20. Finally after 12.4 miles looking for a suitable camp, we found one on river left, a small overgrown area that might have been someone's private boat access which was muddy on the bank and knee high grass where we were going to camp. It was a trick getting out of the boat and Johnny could attest to that as he almost had his rear side bathed in mud. 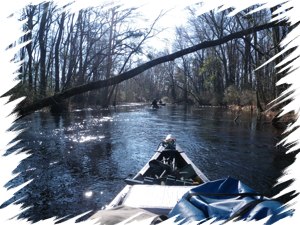 After setting up tents in this chigger and mosquito infested area, everyone fired up their own stove to cook. Paul had boiled shrimp and salad, Johnny cooked the Muskie shrimp and grits using all kind of spices, some indigenous to the NC Triangle area where all the fancy stores are. I settled for grilled steak, baked potato and salad. We were able to build a small fire and sat around the rest of the night telling tall tales, jokes, and the usual lies. Johnny broke out four small real glass shot glasses for us to have a shot of Irish whiskey. We dubbed this campsite Whiskey Landing. After turning in for the night we were serenaded by owls. Wildlife seen on this days paddle was turkey, heron, hawk, ducks, egrets, otter, and muskrats. Very little development was seen, maybe two cabins or river houses.

The next morning, started off with coffee and breakfast, Paul grinding his own beans, Johnny using a coffee press and me with my little tubes of instant coffee. My breakfast was side meat and eggs. I was too busy eating or cooking to notice what the rest were eating. We left this place around 0900. After a total of 15.8 miles (I will use miles from the beginning of the trip), we came to Hwy 401 which has a boat landing on river right. This is a suitable landing with a concrete boat ramp next to the bridge. I had used this for take out and put ins on day trips in the past.

We saw some men in a boat fishing across the river from the boat ramp, the first human contact since putting in the day before. After 26 miles we passed under Hwy 76 bridge which also has a boat landing next to the bridge on river right. We began to look for a campsite, hopefully better than the night before. Someone must have been looking out for us as when we had paddled 28.6 miles we came upon a nice grassy field on river right which looked like the grass had been cut several days before. This had an easy take out - grassy slope for the canoes and plenty of area to spread the tents out so the snoring would not bother anyone. This field was almost the size of a football field and had a road near it. We could not find any houses on the road and Johnny found two small ponds, a picnic shelter and a Ducks Unlimited sign, hence the name "Ducks Unlimited campsite". We decided to chance camping as there were not any posted signs.

After tents were set up and the usual beverages sucked down, we started supper. Paul and I grilled steaks and baked potatoes, and I also baked a cored Vidalia onion in tin foil with a bouillon cube inside. That night we talked about the wildlife seen: deer, egret, heron, and also the usual tall tales were told. We kept an eye on the night sky watching the lightning in the distance. After everyone was in bed the lightning was coming closer and around 2 in the morning the rains came. I got up turned my canoe over and covered my gear with a tarp. It poured.

The next morning, Paul left a cup on his table and it was more than an inch of water inside. After a breakfast of instant raisins and spice oatmeal, (I know, stick your tongue out but I love it), we packed up, some of the gear still wet. Not sure again what the rest had eaten that morning.

We left this nice campsite around 0900. We had paddled four miles (32.4 miles) and came upon a porch swing hanging from a tree, with a two real nice signs, one said "Lynches River Yacht Club" the other said "Mali-Boos Beach". Johnny pulled out a watermelon and we sat around on the swing chomping away at this feast. After 33 miles we paddled under I-95 which was busy with traffic as usual, and Hwy 403 at mile 36.5. There is an access off Hwy 403 (36.7 miles) that belongs to a church but Paul said the public can use it. We started looking for a suitable campsite and at mile 44.5 we found a really nice one. I mean a REALLY nice one. Once again it did not have any posted signs, a large green freshly cut grass field, a shaded area with a picnic table, nice grassy beach and the only thing from keeping it from a five star was a sandy beach and fire ring with plenty of firewood. Paul, Muskie and Johnny think my expectations are too high.

We looked around as surely there had to be a house nearby but in absence of this we pitched our tents. We knew this was too good to be true, as a little while later a man on a four wheeler with his wife on the back drove up and did not have a happy look on his face. We begged his forgiveness and told him about the rough night we had and bad camping area with all the rain and guaranteed him we would leave it like we found it. He agreed with our camping and we talked with him awhile, learning his name was McGee, where he lived and told him about our trip down the river. Before he and his wife left he wanted to know if we needed a store run. Paul was going to tell him no, that we would rather come and eat dinner at his house but refrained. We decided to call this camping area McGee's Field.

Supper that night for me was spicy tuna over rice and Muskie made him and Johnny some type of macaroni dish with the usual Triangle gourmet store spices. Paul had something with rice as I had too much rice and gave him some. That night was cut short of conversation as thunder and lightning and then rain forced us into our tents. That day we had seen more wildlife: deer, soft shell turtles, heron, egrets, hawks, and ducks. 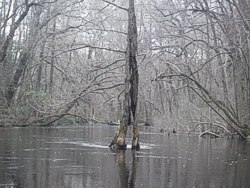 The next morning, I fixed an omelet with pepper relish, cheese and side meat. We left about 0855 packing up mostly wet gear.

At 45 miles, we passed the Hwy 301 bridge, no access, and at mile 52.5 paddled under McAllister Mill Rd, which had a sandy beach access. We paddled on until we came to some trees across the river which we did not wish to portage, so we started cutting. Johnny doing most of the work with the huge pruning saw belonging to Paul and then as a team we helped each other pull the canoes over the rest of the limbs. Johnny had saved the day again as he had earlier in the trip got out of his canoe and unblocked some limbs for us to get around.

Around 1400 we made the end of the trip at 56.9 miles at Lynches River Park. We had decided earlier to take out and run another shuttle and will save the rest of the Lynches for another time. I loaded my gear on my truck, took Muskie and Paul back one hour to their vehicles and headed for home. It was a great trip, not too much downfall that hindered us, but if the water was lower we would have had some problems. Water level at Bishopville gauging station when we started June 8 was 5.5 ft and about 350 cfs and dropped to 5.3 ft 250 cfs on June 10 before rising to 6.3 ft and 430 cfs on June 11 when we took out.

A good trip with a great group of paddlers, a canoe expert, a flora and fauna expert, a chef, and a fat boy who likes to eat. You decide who is who.

Put in was outside of Bishopville, SC on Hwy 15, Lynches River County Park is 12 miles south of Florence, SC, cross the Lynches River turn right on Old Hwy 4 go two miles to the park.