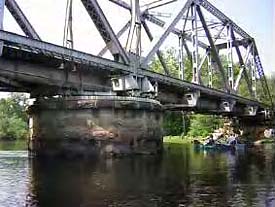 A friend once told me the �the weatherman ruins more paddle trips than the weather�. The forecast for Saturday night and Sunday called for rain in the area we were going on a canoe camping trip, the Lumber River. This did not discourage eleven optimists from the Lumber River Canoe Club who put in at the River Bend Outfitters in Fair Bluff, NC for the overnight camping trip down to Rice Field Cove Landing near Nichols, SC, a distance of 16.4 miles and Section 15 in Ferguson�s book, Paddling Eastern North Carolina.

We had four people from the Lumber River Canoe Club that only did the day trip, two, Marshall Thompson and Tim Locklear who got out at Griffins Landing, 4.7 miles, and two who did the day trip to Rice Field Cove Landing, Jim DePree and Mary Martha Vaught. The optimistic campers were Jim & Mia McDermott and their two dogs, George Walker, Marianne Hartman, Charles West, Rudolph Floyd, Mike & Liz Britt and their dog, Omer Register, and Sandy Meece and this writer Don Meece.

After our lunch break we reached the point where Marshall and Tim left us and we paddled on wondering if the water was low enough for some nice sand bars to camp on. If not we could always camp at a known campsite, Watermelon Bluff. The water level at Boardman, NC when we started out read 5 ft with flow of 575 cfs. We soon found out this was a real good level as sandbars were evident.

We stopped after about 10.1 miles at a place we usually call the Oasis, a real nice sandbar with plenty of shade trees and plenty of wood for a fire. The sand was like beach sand and the water was clear. We had stopped several times before we reached the Oasis and took swim breaks. Jim DePree and Mary Martha left us and headed for the take out. The rest of us settled in pitching tents and gathering firewood. It was then time for a swim break and hors d�oeuvres of cheese, veggies, dip, chips, and smoked oysters.

That night the moon was nearly full and we roasted hot dogs over the fire, provided by Sandy and I, and later smores (marshmallows, chocolate bars, graham crackers) provided by George, and watermelon, which had been cooling in the river most of the day, provided by Jim M. The night was spent around the fire, some singing songs and telling jokes and tall tales. Some hit the tents early as they were tired or could not stand the stories or off key singing. No rains came that night and by the next morning there was not a cloud in the sky.

We broke camp after breakfast and left about 1015 and made our takeout at 1215, after a few swim stops. Some of us went back to the River Bend Outfitters in Fair Bluff and ate lunch on a picnic table at the Outfitters. The weather was perfect, no rain, and cool at night, and warm during the day. The sandbar that we camped on could not have been better. It offered shade, plenty of space for the 8 tents and we could have put more tents on it if more people would have come. A really great and relaxing weekend, nothing could be better for a Father's Day retreat.

Plenty of sandbars for camping on the river if water is below 5ft on USGS gauging station in Boardman, NC.

From Interstate 95, take Hwy 74 East to Hwy 242, go South and follow it to Hwy 76 South, to Fair Bluff, NC. River runs next to town and the River Bend Outfitters is the put in location on the river.