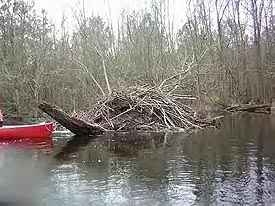 With the temperature of 36 degrees and a wind chill of 26 degrees, four Dumb but Tough paddlers put in on the Little Coharie Creek on Hwy 242 between Roseboro and Salemburg, NC. Paddlers were Charles West, Wayne Charles, George Walker and this writer, Don Meece. Due to the over zealous nature of the DOT with putting guardrails up making the usual put in more than difficult at the bridge, we had to put in on a small channel on the North side of bridge. With the high water today that was easy. The gauging station, which is 33 miles downstream on the Black River and takes about a day for this water to run, read this morning at 5.56 ft with 624 cfs flow.

This trip covered about 6.2 miles on Georges GPS and took 4 hours including a lunch break and several portages. We had approximately 18 trees to go through, under, or over to include the two portages. There was evidence of beavers in the area with dams at small channels leading into the main creek along with some beaver gnaws. After approximately 3 miles we reached the Hwy 24 Bridge. After this bridge the water seemed to be backed up which we suspected was a beaver dam. After about one mile from the bridge we came upon a big beaver lodge and around the next curve we could hear the water running over the beaver dam. It sounded like a giant class III rapid in the distance, but when we got to it, we were able to get over one side. At lower water it would have been more difficult.

We reached the take out at Fleet Cooper Rd before 2pm. This is a nice section to paddle despite the trees and is very remote. It is a combination of swamp and hardwoods with some bluffs rising 15 ft. Wildlife seen today was many varieties of birds; cardinals, hawks, kingfishers, buzzards, and we saw deer, including one dead 7 point buck on the bank.

Motels and restaurants on I-95 and in the town of Clinton, NC about 8 miles away.

No fees or permits are required.