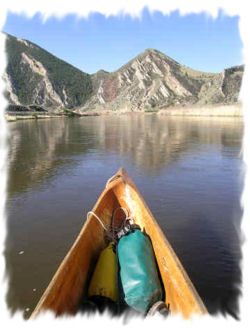 The sun finally broke through the wet and cloudy Montana skies for our weekend paddle trip.

It had been a really wet spring here with snow falling every weekend. Our route was the entire Jefferson River from Twin Bridges to the Confluence with the Madison and Gallitin Rivers near Three Forks.

This was a unique paddling experience for me and my friend who is the 5th-great grandson of Captain William Clark from the famed Lewis and Clark Expedition. Not only was I paddling with someone carrying the DNA of one of our countries famous explorers, but we paddled the entire route in a 21-foot, 225 lb dugout canoe. This dugout was made by friends in Minn. out of a Cottonwood tree.

The Jefferson was not yet flowing at maximum flood waters as it was still rather clear, only a hit of spring run-off silt was evident in the water. The route to the confluence is about 80-miles. We decided to paddle the entire route overnight.

We put the heavy dugout in the water about 10am on a bluebird clear day. Temps were already in the 50's.

The water was swift and carried us along at a good clip all day long. Very few obstacles in the form or sweepers, log jams, sand bars etc greeted us. In fact I was surprised how less technical the "Jeff" is compared to the nearby Yellowstone River. I'm sure later in the year when the water is much lower it would be more of a challenge as to picking the route with the most water. Our only challenge was three diversion dams - One about two hours downstream near the town of Waterloo (not on the water). It's at the Parsons Bridge and consist of a rock wall all the way across the river. Depending on the water levels it determines your progress over it. 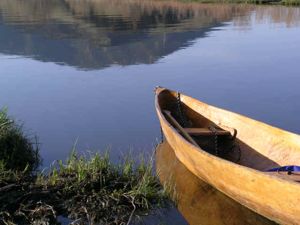 The current was very rough with lots of exposed rocks and not a clear channel to be found. It might have been ok in a rubber raft or fishing dory but in a 220 lb dugout log we didn't want to crack the canoe on the rocks and possible lose it altogether. What we did was drag the boat over the rocks on the river-RIGHT side against the brushy bank. From there we had clear paddling for several more hours until just past an odd home that is built within the walls of an old mill. I think the proper run of this rock diversion would be river-LEFT at higher water. It was less of a problem for us as well. We opted once again to drag the log over the middle just to the right of a tiny island.

The bird life abounded along each and every bend. Since it was spring we saw a lot of migrating geese and various species of ducks. Many Sandhill Cranes, Great Blue Herons, Osprey, Bald Eagles and Pelican greeted us on almost every bend. Some would fly as we approached, others watched with curiosity. We saw many white tailed deer and even four moose eating willows that line the shore. The rarest animals we saw were a mink and a big dark green turtle, each at the waters edge as we paddled by.

With the fast current we covered approximately 50 miles by 6:30pm. There were many small islands, old side channels and sand bars to camp on. We found an old abandoned channel just before the entrance of the big canyon in the area of Jefferson Islands which should be on all maps.

By morning all our gear was covered with a thin layer of frost and geese honked so loud it was difficult to get any sleep after 5 am. We even had a cow moose strolling near our camp, its tracks marked its trail to the waterhole where it often drinks from.

Our dugout took on very little water. Most that was in the canoe was either from our feet dripping when we got into the canoe or from the small cracks in the hull which is common with dugout canoes. It's best to keep a dugout as wet as possible in order for the wood to swell up and make the cracks tighter. Lewis and Clark had a rough go coming UP the Jefferson. The men's feet were in constant pain, blistered and their footwear was often destroyed by the constant wear. The expedition went down this river the following year in 1806 on its way back to St. Louis. 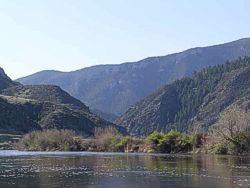 As we departed the next morning the sky was again filled with blue, not a cloud was to be seen. The canyon is extremely beautiful. High pine covered hills mixed with various granite rock bands and even dark shades of red and brown. The canyon would keep any amateur geologist busy determining its creation. A dirt road and railroad track follows the river here but is of little use. One could camp in this canyon but the places would be limited due to the road and high banks. Look at your topo maps good if you want to camp in here to find the more open and flat areas etc. The best option is just before (Like we did) or after the canyon. About mid-way through the canyon there is one small diversion dam. We ran this on river-RIGHT and didn't have any problems what so ever. Don't take the supposed channel to the left just before the dam as that is actually NOT part of the river but is a wide irrigation canal.

Once through the canyon which takes a couple hours to get through the valley opens up to more of an agricultural bottomland, lined with cottonwood trees and braided channels. Miles passed as we talked about Lewis and Clark, the river, and being the only canoe except one other the entire route. The Jeff snakes through lots of beautiful cottonwood bottoms and small islands. Once we passed under the Interstate Highway-90 bridge it was only an hour before we arrived at the confluence with the Madison and Gallitin Rivers. The pull-out is at a big boat launch at the base of a 300-foot limestone cliff on river RIGHT. It was in this area that the Lewis and Clark expedition spent many days camped here to determine which stream to continue UP. We finished at 3 pm for a total of about 15-16 hours to paddle the entire Jefferson river.

Author comments: Bring a gallon of water person per day especially in the summer.
Camp on islands, sand bars and away from private property.
You could do an easy "self-shuttle" by dropping off your car and hitchiking with a sign that says "Twin-Bridges" And carry your paddle while hitching because it is a sign for all the fisherman/boater to know that your not some vagrant heading west. I usually get a ride within the first few cars.

A few motels in Twin Bridges as well as local camping.

Twin LOST its grocery store, so don't plan on buying things there.
The Blue Anchor Bar and Restaurant provides a great local gathering place for a cold beer, burger and to get local water conditions from the many fly fisherman that haunt this place.

A 21-foot, 220 lb, cottonwood dugout canoe built by LeeSquared boat building enterprises in Minnesota (i.e two boat nuts both named Lee who like to paddle and build things that float)...

On Interstate 90 head SOUTH at Whitehall on Hwy-50. From Whitehall it takes about 35 minutes to get to Twin Bridges. There is a small city park in town to launch your canoe. The take out is the Headwaters State Park just north of the town of Three Forks. Exit the Highway at Three Forks and head north following the signs to the State Park and boat ramp which at the far north end of the park...approximately 5 minutes drive once you exit the highway.

Great to have a copy of the Lewis and Clark journals to follow along with what they experienced.

As far as maps are concerned, I used copies off of My-Topo.com of the river. They are hard to follow due to lack of detail but good enough to keep you out of trouble (not that there was much trouble anyway but..)