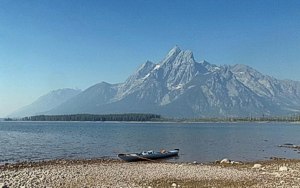 Paddling around Jackson Lake was on my adventure list for the summer. I finally had a 3-day weekend free, and packed up everything for 3 days of paddling & camping. The forecast looked good, rain-free, though high winds were predicted on days 2 and 3.

Campsites are very popular in Grand Teton during mid-summer, and I hoped I'd be able to piece together a circumnavigation with suitable mileages of up to 15 per day. The rangers that issue permits are very helpful, and when I announced my plan, the ranger pulled up a chart of campsite availability over the next few days on her computer screen. The only campsite available on the second day was Wilcox Point, on the far north end of the lake, so I planned my itinerary around that. The Wilcox Point and Warm Springs sites are often the only ones left open on summer weekends (and they're a bit out of the way, requiring a long crossing, or circuitous paddle), so future paddlers may have to plan around that.

After a few minutes of deliberation, I decided on putting in at Signal Mountain, then paddling on the south end of the lake to the Deadman's Point site (which is actually on a small island). On the second day, I'd be heading north on the lake's western shore to Wilcox Point. On the third, I'd have the option of staying at Little Mackinaw Bay (near Colter Bay), or paddling all the way back to Signal Mountain.

I got to the Signal Mountain landing late morning, and took my time getting ready. Today would be a short day of paddling at around 6 miles. There were very few people there, as it was a Thursday. The weather was sunny and calm. I loaded up my 17' Wilderness Systems Cape Horn, and paddled south along the shore. I crossed at the mouth of a small bay by the South Landing campsite, and crossed the at the mouth of Spalding Bay too. This second crossing took me about 20-25 minutes. 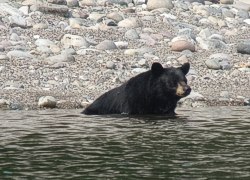 From there I paddled north around a point north of the Spalding Bay campsite, just past which I watched a black bear walk along the beach and sit in the water for about 20 minutes. I made it to my campsite at Deadman's about 12:30pm. The campsite is nice, but often windy. It's on a small island, and the channel between it and the mainland is sheltered, a good place to park the boats.

For the second day, high winds were forecast, so I was up fairly early to break camp and start paddling. The winds here tend to come from the southwest, so I hoped that later in the day I'd be mostly sheltered by the mountains to the west, or have a tail wind. I was paddling by 8am (not really that early) and the water was calm. The views of Mt. Moran, Bivouac and Traverse peaks, and the rest of the northern end of the Teton Range are spectacular here.

I crossed at the mouth of Bearpaw and Moray Bays, since the lake was still calm. This crossing took me 20-25 minutes. I paddled north along the western shore, taking a couple of breaks on nice beaches to snack, and stretch my legs. The water was very calm that day, which I was surprised about after hearing the forecast. Waves can be pretty big on Jackson Lake when the wind is blowing.

I spoke with a party of paddlers in canoes at the Warm Springs campsite before being invited to lunch. I was paddling solo, so it was nice to trade a few outdoor stories with some pleasant people. From the Warm Springs site, I paddled north past some short limestone cliffs to the Wilcox Point site. The wind started picking up on this last stretch, coming from the south. I arrived at the Wilcox Point site at around 2pm. That afternoon, the wind came out of Webb Canyon to the west of the site, and was very strong indeed. I spent the rest of the day reading, and was in bed early. The next day I'd be paddling south, and anticipating a strong head wind, I planned on being in the boat very early. 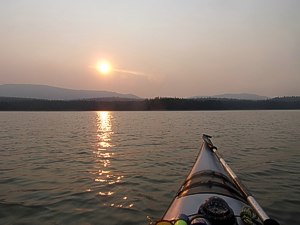 I woke at 4am, and started getting ready. It was windy all night, so after taking down the tent and packing my dry bags, I carried them down to the beach where there was a spot to sit out of the wind. I sat on a log, drinking coffee, eating breakfast, and waiting for sunrise. I packed the boat and started paddling east across the lake at 6am. The wind was coming from the north-northwest, and was strong enough to make 1 foot waves here, where there is basically no fetch (maybe two miles, sheltered by mountains to the north). I made the crossing to the Lizard Creek campground and headed south.

The waves made the paddling exciting and fast. I stayed a little way from shore and headed to the west side of Arizona Island. I ducked out of the wind on the lee side and took a short break before continuing south. The waves increased in size to about 2-3 feet where they were breaking on the eastern shore. I paddled on the east side of Cow and Moose Islands at Leeks Marina. Tip for visitors: The pizzeria at Leek's Marina is very good, get pizza here if they're open.

I stopped at Colter Bay for another break at around 9:30am. The wind and waves were keeping most power boats off the lake. After a short break I decided I would paddle all the way to Signal and be done for the day. I'm not good at sitting around a campsite by myself all day. South of Colter Bay is a group of islands, and one can choose a more sheltered passage, or stay to the west side of them for a more exposed route. I chose the more exposed and currently exciting route paddling on the west side of Sheffield and Badger Islands. Continuing south, I crossed from Hermitage Point to Donoho Point and then to the Signal Mountain Landing.

An excellent trip, with great paddling and great campsites.

Jackson Lake is roughly 6 miles wide and 15 miles long. Conditions can be windy, the water is cold to very cold, and there can be a lot of motor boat and water skier traffic. Be prepared and wear a wet or dry suit if conditions warrant it. I've almost capsized because of large boat wakes, and know of others who were stuck on islands in high winds.

More photos and other trip reports can be found at:
outgettinglost.com

There are campgrounds on the lake at Signal Mountain, Colter Bay, and Lizard Creek.

Colter Bay village has the most amenities, with restaurants, a market, a marina, laundromat/showers, and a ranger station.

Permits for backcountry sites can be had at the Craig Thomas Visitor Center in Moose, at Jenny Lake, and Colter Bay. A backcountry permit costs $25 per trip (even with multiple sites) and campgrounds are somewhere around $25 per night.