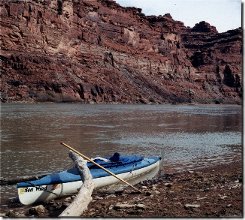 Labyrinth & Stillwater Canyons + Colorado River From Moab to the Confluence with the Green.

This 120 mile section of the Green River is one of the most spectacular flat water paddles in the country. Mile after mile of ever deepening canyons brimming with yellows, reds, greys and whites. The area was first explored by John Wesley Powell in the late 1800's. The area is rich in geologic as well as historical sites to visit. The canyon walls will rise above the water to over a 1000 feet above you in many spots.

I started in the town of Green River Utah in March of 2001. The water level was rather low and running at only about 3000 cfs. The first twenty miles is mainly Summerville Formation and Manco's Shale. You will quickly pass Crystal Geyser which is a cold water geyser which erupts about 30 feet high. Its frequency is very unpredictable. You will be paddling though some riffles and many sand bars at low water levels. The historic site of Dellenbaugh Butte will rise above the river within the first day of paddling. Named by John W. Powell for a member of his exploration party.

As the river cuts deeper into the canyons , the more geologic wonders appear. Entrada and Navaho Sandstone with its red and orange colors will make you wish you had brought more film for your camera. 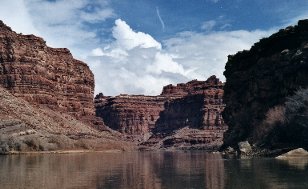 There are numerous canyons to explore and get lost in including many that Powell himself walked though. One can spend a week easily to the confluence or take out at Mineral Bottom which is just over 65 mile mark. If you take out there, you would need a shuttle or car dropped off there. Many people opt to go to the confluence and then have one of the jet boat shuttles from Moab come pick them up on a specified day. A few hearty people will want to paddle upstream on the Colorado River the 50 miles to the landing near Moab.

Once you enter Labyrinth and Still Water Canyons you will begin to feel how small a person you really are. The Chinle and Moenkopi Rock formations will rise 1000 feet over the river like giant buildings in a large city. But only solitude and the occasional canyon wren will be heard.

I recommend climbing up to Bowknot Bend where the river makes a complete loop coming back to a point where it is only a few hundred yards where it passed some seven miles back upstream. The view from the "Post Office" Register will give you a good view of how the river cut though the rock over the last millions of years.

You will also encounter the remains of the past. If you look carefully you will see the ruins of the Anasazi Indians who once inhabited this land some 700 -1500 years ago only to disappear without a trace. Look high on the canyon walls and you will see their food grainerys and storage walls where they kept there food supply.

A short hike up Hell Roaring Canyon and you will find the inscription of trapper Denis Julien who passed though here etching his name and the date of "1836 3 Mai" along with a sun and boat on the canyon wall.

Many people who paddle this spend about 3-5 days to the confluence with the Colorado River, but it is possible to spend at least 7-10 days exploring and taking your time. I would recommend bringing a pair of rubber boots that go to your knees as the river shore is very muddy and clay. You would quickly ruin a good pair of hiking shoes. You would also want to bring your own water jugs as the river is too silty to filter with a pump as it would take you a long time to do so. 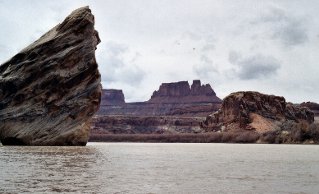 The river is the least crowded before April 15th and again after the middle of October. The lower the water the more ease you would have at finding campsites compared to the higher water times. I would not recommend doing this in the heat of the summer (July/August) It would be very uncomfortable and you would not have any shade. For the hearty paddlers who would want to paddle upstream to Moab, It is a lot of work. The current is swift and may be swifter when the water is higher. I had did this myself and it took a total of 21 hours of paddling hard to reach the landing. However the scenery is absolutely incredible. You could easily do this is 3-5 days at a normal pace. However a word of caution. I would not want to be in the position where "if" you could not paddle back upstream to Moab; as there is NO ROADS TO WALK OUT FROM. As I had said before 99% of the people get out at Mineral Bottom or have a shuttle boat pick them up at the confluence of at Spanish Bottom.

There are NO accommodations while paddling. No roads!!!! No signs of civilization what so ever. Just solitude and awe! You are also required to bring out ALL WASTE including your bowel movements. Contact NPS and ask about appropriate containers for human waste disposal. Bring Lots of film.

The National Park Service requires you to have a permit for Labyrinth and Stillwater Canyons of for the Colorado below Moab. They cost $20.00 and can be arranged by calling the NPS. $4.00 fee required to park car at "put-in".

The town of Green River Utah is on Interstate I-70 about a 4-hour drive from Salt Lake City or about 2-3 hours from Grand Junction Colorado. Drive into town and look for signs for Green River State Park.

The put in is at Green River State Park In Green river Utah. The cost of leaving a car at this spot is $4.00(in 2001) per night. The take-outs are at Mineral Bottom in Canyonlands National Park. If you are leaving a car there, it may be wise to have 4-wheel drive as it can be a bad road if the weather has been rainy. To get better direction to this take-out contact the national Park Service for Canyonlands. If you go to the Confluence or Spanish Bottom you can contact a jet-boat service to pick you up. The numbers are listed below.

You can do this river without topographic maps as it is non-technical. The most used maps/guide books used are CANYONLANDS RIVER GUIDE:LABYRINTH/STILLWATER CANYONS BY Belknap and the RIVER RUNNERS GUIDE TO CANYONLANDS NATIONAL PARK AND VICINITY by the Powell Society LTD. The give accurate mile by mile descriptions of geology, history, facts.