by  DeadHead
A self-supported trip created by DeadHead 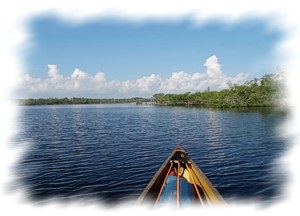 I purchased a 16'2" kevlar Swift Shearwater so I decided to take it on an extended trip in Everglades National Park. I'd solo paddled the 99-mile Everglades Wilderness Waterway three times over the past twenty years so I wanted to take a different trip. After much planning and itinerary adjusting, my trip turned out to be a 129-mile loop from Flamingo along the edge of Florida Bay and back.

I prefer to make trips like this in May. Bugs can be a bit bothersome at night and early morning, but you'll likely not have anyone else at any of the campsites, and you don't have to worry about cold fronts. May is also just before the summer rainy season so storms aren't as likely either.

The second day was an easy 5-mile paddle to Middle Cape Sable, my favorite place in all of Florida. Long sandy beaches in both directions, the best fishing, and stunning sunsets. 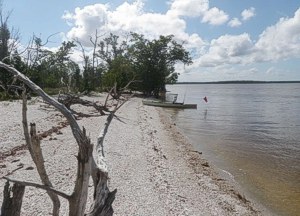 Day 3 was another easy 5-mile paddle to Northwest Cape Sable. Next I was anticipating a 25-mile paddle north to Highland Beach, so I left at 0400 to get a head start, and paddled in the dark along the edge of the Gulf. By dawn I was at the Shark River so I paddled through the maze of creeks at the mouth of the river to avoid a 2-mile crossing in the open water of Ponce de Leon Bay. I hadn't planned on camping at Shark Point but found a nice shell beach so I decided to stay a night.

The next day I paddled about 10 miles north to Highland Beach, the farthest north I would travel. This is another exceptionally pretty beach but try to time your arrival at high tide so you can access the beach without portaging in mud. 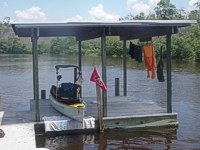 All of my campsites so far had been on beaches, but the next four days would be spent on chickees, which are basically wood docks with a roof and port-a-john. I paddled back south and came upon an enormous bull shark cruising the flats in front of the Broad River. There are lots of sharks in these waters so swimming is not advised. I took a break at a shell mound at the mouth of the Harney River, caught some fish for dinner, then paddled up the Harney River to the chickee. From there I stayed at the Shark River chickee, Joe River chickee, and finally the South Joe River chickee. From there it's just 8.5 miles to Flamingo, and journey's end.

Barring inclement weather this is a moderately easy trip. I was fortunate to have northeast and east winds that maxed out in the afternoons at about 15 mph, but calmer in the mornings when I was paddling. I put a small Bimini top on my canoe, which was a godsend during the heat of the day. Bring at least a gallon of water per day (I brought 12 gallons and was able to get two extra gallons from some fisheries biologists I encountered on Day Six out in the middle of nowhere. Lucky me!

Please note: cell phones will not work in most of Everglades National Park, so they are not a reliable source of communication.

My trip report with more photos is chronicled at Paddling.net in the Message Board tripping forum (posted June 7, 2010).

Currently the park charges $10/car plus $3/canoe-kayak. There is also a $25 annual pass that is good for Everglades National Park only. A $50 pass is available for all national parks, good for one calendar year. Persons over 62 years of age pay $10 for a Golden Age Passport that is good at any national park for life. Depending on the time of year, there is also a small fee for camping. Permits for backcountry camping are mandatory if you are staying at the designated campsites. No permits are required for people sleeping on boats.

From Homestead, FL take SW 344 Street west off of US1 to SW 192 Avenue (look for the Robert Is Here fruit stand). Turn left and proceed to SR9336 and turn right. This leads you to the main entrance to Everglades National Park.