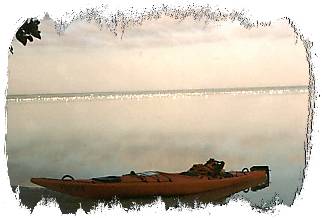 When you think of the Everglades you think of swamps, alligators, and rivers of grass. You rarely think of the open waters of Florida Bay and the Gulf of Mexico. Florida Bay is the area between mainland Florida and the Florida Keys. The bay is generally very shallow and dotted with mangrove islands. Under the protection of the National Park Service the islands serve as bird rookeries for Pelican, Egret, Ivis, Roseate Spoonbill and dozens of other species of birds.

Cape Sable is the southwestern most point of the mainland of Florida. It has a long history of settlement, first by Calusa Indians for short periods of time. In the early 1800s, during the Seminole Wars, Fort Poinsett was established to protect Key West and the keys from Indian assault. The fort was later abandoned. In the late 1800s James Waddell planted a coconut plantation. In 1935 a hurricane damaged the plantation and erased Fort Poinsett from the coast. The area was returned to its natural state by 1960 when hurricane Donna cleared the land of all but two coconut trees. Carl Ross Key and its close neighbor Sandy Key were part of the rich history of fishing and hunting with the land being cleared of any evidence of man by storms and hurricanes. 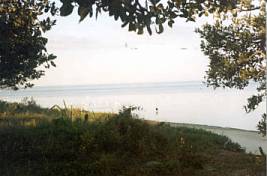 Flamingo is located on the Southern Coast of Florida and is approximately 6 miles East of Cape Sable and 35 miles Southwest of the park entrance at the end of the only paved road in the park. Flamingo was originally a fishing camp with a long history of settlers trying to make a go of it in a very isolated spot. Flamingo has been protected from hurricane damage by the shallow waters and banks of Florida Bay. The area has a hotel, general store, docks, boat ramps, and a campground. Everglades National Park is a fee-supported park, which means you have a $10.00 entrance fee as well as a $3.00 per kayak fee and a $10.00 camping permit fee. The fees go directly to the park and weather you spend a day or a week the park is a great value. More information is available on the Internet.

Carl Ross Key is approximately 10 miles Southwest of Flamingo. The trip across the Northwest portion of Florida Bay will cross open channels shallow mud and grass banks as well a shallow basins. The basins and channels can get choppy depending on the wind and tide conditions. At low tide, many banks are out of water. This can make the trip much longer by having to paddle around these obstacles.

My trip began as a group trip. Six members of our club "Blazing Paddlers" were to paddle to Carl Ross but a breakdown in communications occurred when our leader caught the flu and a missed phone call left me at the docks all alone. I made a call to my wife who confirmed that I would be the only one making this trip. I made a quick assessment of the situation and made a trip to the general store to complete my food menu for the trip and I was off.

I put in on the bay side boat ramp and made the short paddle though the harbor and I was out to Florida Bay in minutes. Carl Ross is approximately 10 miles Southwest of Flamingo. I took up a course heading of 210' and headed out into the bay. Rather than paddle out the channel which was South I continued my 210 heading over a shallow bank paddling for about a half mile in 3" to 10" of clear water before I reached the East - West channel. There were many birds standing in water watching me paddle by.

As I reached the channel Carl Ross was still out of sight. I followed the channel West for four miles to avoid the shallow banks to the South and to use the wind to my advantage. As I reached channel marker * ,Carl Ross Key was starting to appear on the horizon. I changed course to the Southwest. With a quartering breeze I paddled the remaining 4 miles over water from 3" to 6' in depth. The water was cloudy with mud generated by the falling tide and waves stirring up the fine silt bottom. Several times as I paddled over shallow areas I disturbed large stingrays that lifted my bow as they scurried out of my way.

The last mile of my paddle was across The First National Bank. The tide was now flooding in at an increasing rate. The bank would have been too shallow to cross at low tide but with the incoming tide I moved across the bank slowly as I paddled against the current. As I crossed Rocky Channel the current increased to over 2 knots making the crossing longer than expected. As I reached the shallow water on the South side of the channel the current speed was reduced, making my progress for the last 200 yards much quicker. 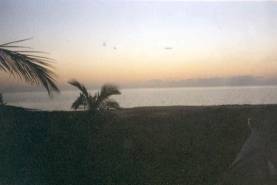 As I reached Carl Ross I found an island with a pristine beach surrounding a red mangrove island with many species of plant and animal life. A mother osprey chirped from her nest as I landed on the shore. Dozens of sandpipers moved down the beach as I made my way to the campsite. The park service designated the North end of the island. They proved a very nice picnic table surrounded by red mangrove and one palm tree. The South end of the island is mostly seaoat grass and prickleypear cactus. The beach is made up of coarsely ground seashells.

The bright morning sun piercing my tent brought me to life. I slid my kayak into the deep channel that surrounds the island and quickly entered very shallow water heading in the same direction that I came from the previous day. After about a mile I found a new challenge. The 3" of water I had yesterday was now 1" or less. I ended up paddling over 200 yards of mud flat that was too soft to walk. My trainer would call it strength training. After making it to the deeper water of Sandy Key Basin I headed Northeast to the channel and then East toward Flamingo. I heard the sounds of fishermen and birds feeding over a mile away. The lack of wind and smooth bay was a wonderfully quiet experience. I paddled east for another hour when I came upon a pod of dolphins at play. They were jumping and chirping to each other as they played. They played all around me going west then east keeping a distance of about 10-30 yards. The sound they made while breathing as they swam by my kayak was unforgettable.

I passed the familiar channel markers during the next hour of paddling. I noticed that the tide was still going out and an Easterly headwind wind was starting to build. Over the next hour the wind picked up to about 10 knots and moved to a Southerly direction. I paddled east to the Flamingo Channel entrance rather than take a chance by paddling over the shallows. As I paddled up the channel thousands of mullet swam by. The wind was at my back and after over four hours of continuous paddling my trip was ending with an effortless paddle toward the harbor. I got my two best birdshots just as I turned into the harbor. The end of a picture perfect overnight solo trip.

Flamngo has a general store, showers ($3.00) restaurants and a lodge.

$10.00 entrance fee and you must file a float plan and reserve the camp site.

Take the Florida Turnpike to the end. The turnpike merges into US1 you will go south on US1 for about a half mile. Turn left at State Road 9336 and follow it to the end, you will be in Flamingo.

Everglades National Park has a rich history; Charlton Tebeau has a wonderful book title Man in the Everglades, published by the University of Miami Press ISBN 0-87024-073-0.