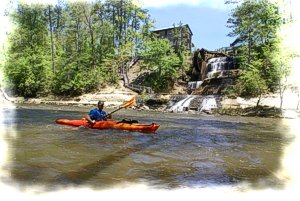 My girlfriend and I drove southeast from Austin to La Grange (Hwy 71 East). We exited La Grange (Hwy 71 East) Business Exit. We then drove until we went over the Colorado River. Right under the bridge there is a nice little park with volleyball court (sand), picnic tables, trash cans, and a boat dock. We parked my girlfriend's car here and returned back to Smithville (between Austin and La Grange on Hwy 71). When we parked my car at the Vernon L. Richards Park, we walked down to the "launch site". There was a very nice fishing pier yet it was not suitable to launch a canoe (railings on the edge were nice but in the way of trying to load our canoe). However, if you go to the left of the pier about 20 feet, there is a great little sand bar that you can load and launch your canoe from.

Side note - We spoke with Smithville PD, and La Grange PD, to let them know our cars were there and that we were canoing down the Colorado River. They were very hospitable and said they would keep an eye on them for us.

We entered the water about 10:45 on 09/15/07. The LCRA's website stated that the campsite (Lower Colorado River Authority's Plum Creek Park) was 18 miles downstream. The water was running at about 4400 cfs (about 4 to 5 miles per hour while paddling). So with some basic math we figured we would be there in 4 to 5 hours.

During the first day of our trip we saw beautiful birds of all types (ducks, hawks, vultures, egrets, and one bald eagle - not to be confused with a Mexican eagle). The bald eagle was amazing. It was the first time either of us had seen one in the wild. We also saw tons of cows. Some feeding their young, cooling off in the water, and others just relaxing in the shade. During our relaxing times (when the water was carrying us along without the help of our paddles) we came up on two whitetail does who were just running away from our presence. It felt great knowing that you could get that close to those deer without them hearing you. 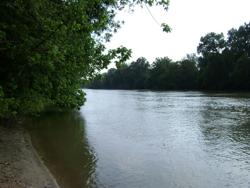 So at this point in our trip we were having a blast, we had stopped for a moment to stretch out on a sand bar and have a picture in front of some small cliffs. Once back in the water we felt fresh and were ready to keep going. Everything was going great, however, a little further down the river, some guy was blasting his deer rifle into the water. Now I have done this before (practicing with your rifle on a piece of wood), but I never realized how scary it would be if you are on a canoe coming up to this scene. We yelled and blew our emergency whistle with no avail. When we were within 50 yards of where the bullets were hitting the water, a voice called out "ALLLL CLLLEARRRR". Needless to say, we kept paddling as fast as we could through that straightaway.

Now I also want to mention islands, there were a lot of islands (big and small) that you could go around. It was fun to take turns choosing which side we went on. Some were thin and shallow with limbs hanging down and others were wide and had hardly any trees along the shoreline. The number 1 thing we learned about going under tree limbs is that when you hit them, you are bound to have a spider or two end up in your canoe.....We must have hit them a lot.

Later in the day we noticed a sign that we had seen on the highway (LCRA's Colorado River Trail). This is where our trip went awry. This was the actually the LCRA Campsite (Plum Creek Park). However, we had seen these signs before and just thought it was posted on someone's land. This park didn't have any other indicating factors that it was a campground. The shore was very steep and you never would have thought that this would be a campsite (not to mention that there was no ramp or slope to pull your canoe up). Since we didn't know we were passing the campsite, we continued downstream. Until once again we heard that old familiar sound of BOOM, BOOM, BOOM. Once again people were shooting their rifle's into the water. When we got closer they stopped shooting and we pulled up next to them along the shoreline. Since we had been paddling for 5 hours (the first day should have only taken 4 or 5 with the current flow), we knew we had to be close. It was then that they told us that the sign we saw upstream was the campground. We were shocked to say the least. We just stared at them for a minute or two until we decided we would go further down to find a place to camp (not that fond of drunk strangers with guns).

We continued downstream until we noticed a beautiful pasture coming up on our right side. We aimed and landed right before a sharp turn with a fast current. We decided this would be our campsite for the evening (P.S. - this spot is just past the Buffalo Wallow Rapids on LCRA's map). We were setting up our tent and unpacking our gear when a man, riding a ATV pulled up. I waved to him, and he to me. When he turned off his ATV he simply said, "Welcome". I introduced myself and my girlfriend, and apologized to him for being on his land. He stated that he owned it but it was "God's Place". This gentleman's name was Tom Elliot. He treated us like royalty. He offered anything that we needed, his cell phone number, even a walk though his pecan orchard. (P.S. - I almost didn't want to include this information, because I didn't want others to take advantage of his hospitality - P.S.S. - he said this spot we were at is the 50 mile mark between Bastrop and Columbus). 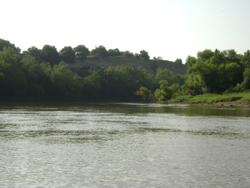 After asking his permission to build a fire, he drove off back to his home. We then saw another bald eagle, and found a four-leafed clover...This was a good sign. We had landed about two hours before sunset(5:35 pm) and had a fire going, tent up, gear unpacked, and "drink" in our hand by sundown. That night we stayed up until about 11 watching the fire and staring at the stars. It was wonderful.

The next day was great. Not only did we have a wonderful night with a great host, we only had 12 more miles to go (instead of the 18 miles the first day then 17 miles second day; we had done 23 in day 1). We took it easy this day and stayed in the shade most of the way. We saw massive fish swimming just under the surface of the river, beautiful cliffs (60 feet), and more birds. When we finally arrived at the third set of rapids on the map (the river was so full that we never noticed the first two), you felt like you were in a choppy lake. Nothing amazing but it kept you on your toes. After that the trip was pretty relaxed. We finished taking some pictures of the railroad bridges and finally ended up at the Hwy 71 East (Business) bridge. Where we took out and unpacked.

Overall we were very happy with this trip. The most we had ever done before was 2 miles. So for those of you who are new to canoeing, don't get intimidated, it was great. While talking about the trip afterwards, we decided that the best of the trip included the solitude, bald eagles, the breeze blowing at you, and hanging a foot in the water. The worst would have to be the gunfire, the lack of a suitable bank for the LCRA park, and that we are done.

We ate at the La Marina Diner afterwards. Nothing fancy but they were very nice, cheap, and the food was great.

From Austin, TX - 71 East to Smithville (Park in the Vernon L. Richards Park - Call local Police Department to inform them that your car will be there overnight)

If using two cars - have one at the end of the trip at 71 East (Business Exit) in La Grange, TX (park under bridge with boat ramp)
If just one car - park at Vernon L. Richards Park in Smithville, TX and launch next to the fishing pier.