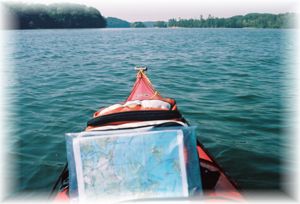 This trip was an out and back trip that began at the Chickamauga Lake Public Marina and boat ramp to a little beyond the Harrison Bay State Park marina.

The boat slid into the water at about 7:45 in the morning. I had my Camel hydration pack stored underneath the webbing on the stern deck with the tube resting nicely on the coaming. On the bow webbing I had my camera pack and kite. More on the kite later.

The morning was a brisk 60 degrees, a great relief from the summer heat that all endured locally. There was a mist rising on the water and the sun was crawling up from behind Kings Point Ridge. The sun peeked over the ridge and gave the mist a golden color. I was excited. This was my first day trip on big water since I first tried out my sea kayak. I have dreams of a salt water trip around Cumberland Island, or maybe a Maine trip.

Anyway, with my gear strapped down and spare food stowed in my bow I paddled off into the mist. The boat ramp was not too slippery. Years ago I learned how treacherous mossy rocks and mossy boat ramps can be. No mishaps this time though.

I expected this to be a trip of new challenges. The lake, being what it is, would certainly have wind issues to deal with in addition to the subsequent waves. I was right. This trip was undertaken on this weekday and in this particular season because I wanted to stay away from heavy recreational power boats, water skiing, and those pesky mosquito-like wave runners. I met up with a few but on the whole everything worked out well.

The water was glassy with a few ripples as I began in the morning. It was exactly what I had hoped for. The wind was not a factor and it was great paddling along the shore. My plan was to use a northeast heading along the shore toward the Harrison Bay State Park where I wanted to eat lunch. The most enjoyable part of this leg of the trip was the quietness. The only sounds were of my paddle breaking the silence. The only ones to hear it besides me were the blue herons on the buoys, and butterflies, flitting above. I thought it unusual to see so many butterflies out over open water.

There were several islands to explore, the biggest of which is the John Patten island. I stopped off on an unnamed smaller island in the group. There I stayed just long enough to feel like I had explored and long enough to evaluate the island for future campsites. The wood peckers and kingfishers sounded surprised. They werent used to sharing the island. A good sign to me that not many people stopped there.

The length of this first leg turned out to be about 10 miles because I overshot the mouth of Harrison Bay. I mis-read my map . When I realized my mistake I paddled back about a mile. The lesson I learned here was not to go too far before re-evaluating your position if you think there is a problem.

I stopped for lunch at the Harrison Bay Marina diner which is open year round. My kids have always liked sitting out on the restaurants deck and throwing an occasional french fry or bread crumb to the bream, bass, and turtles that are just below. The tradition continued on that day.

The paddle back, about 9 miles, took me a little over 3 hours with the wind at my back. I chose a heading that kept me in the middle of the lake this time. By this time in the afternoon there were interesting waves to deal with. There was a scattered white cap or two, and one speed boat. The speed boat created complex waves in open water that were behind me and in front of me because it circled the lake. I have turned over before, and was prepared to do so again, but thankfully that did not happen. I made a mental note though, I need more experience on how to complete a roll in a sea kayak. So far I dont own a paddling skirt, because my trips have been on local creeks which mandate getting in and out of the kayak a lot. The bilge pump, paddle float and sponge were where I could reach them and everything was in a watertight bag. Yes, I had my life jacket on.

The wind pushed me towards my destination. Anticipating some wind, I had thought about playing with my parasail kite. My thought was that if enough wind could be caught, I wouldnt have to paddle. It would be be fun to employ wind power for forward motion instead of my paddle. It wasnt to be however. The wind made the water too choppy and there wasnt enough wind to fill the parasail kite at the time. I also found that I was a little unstable in the waves without the paddle in my hands. Maybe next time.

All in all, the trip covered 19 miles in 7 hours during favorable conditions, including lunch and a little island exploring. I think I could keep up that pace another day for a longer trip, about 55 strokes a minute. It was a satisfying feeling of having the kayak surge forward under my own power on a windless lake in the morning, and later running with the wind driven waves. All of my muscles were complaining about the trip by the time the opposite shore was reached. I may have had a lot in common with those butterflies overhead. Were they as tired as I?

Just a note: Don't paddle on this lake during peak motorboat or water skiing season; if you do, stay close to the shore. An internet source has this to say about the Chickamauga Dam and Lake:

Chickamauga Dam is the fourth of the TVA's main river projects, and is located northeast of Chattanooga. Construction began in January 13, 1936 and the dam went into operation four years later. The filling of Chickamauga Reservoir began January 15, 1940. The water shed for the reservoir is 20,790 square miles. Chickamauga Dam is 5,800 feet long and 129 feet high. Completion of the project took over 500,000 cubic yards of concrete and almost 3,000,000 cubic yards of earth and rock, with a cost of almost $40,000,000. A total of 13.9 million man hours were required to complete the Chickamauga Reservoir and Dam project.
Chickamauga Reservoir, with 810 miles of shoreline, has 35,400 square acres of surface area. It was constructed for the purpose of electric power, flood control, navigation, recreation, an adequate supply of water and other related benefits. The lock at Chickamauga Dam is 360 feet by 60 feet, and raises boats and barges up to 50 feet to Nickajack Lake.
Chickamauga got its name from a tribe of indians that broke away from the main body of the Cherokee Nation. The Chickamauga tribe lived in villages nearly a mile long all along the Chickamauga Creek which flows into the main river body just below the dam.
The counties surrounding Chickamauga Lake include Rhea County, Hamilton County, Meigs County, Bradley County, and McMinn County.
Millions of visitors yearly are attracted to Chickamauga Lake. The area offers two state parks, two county parks, four municipal parks, and two wildlife centers. Boating, swimming, fishing, camping, water skiing, jet skiing, and other water related activities are offered on Chickamauga Lake.

At this TVA sponsored park, the beginning for this trip, there are bath houses and swimming, picnic tables and a concrete boat ramp. The destination point, Harrison Bay State Park, has full amenities including camping, swimming, and dining.

There are commercial navigational maps available for Chickamauga Lake. I used a USGS map.