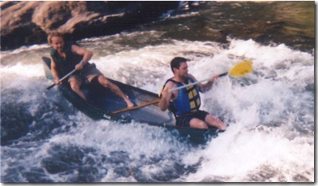 We slipped our canoes into the cold mountain water at the Overflow Road Campground just over the bridge in Ga. The water was swift and clear and the air was starting to warm a little.

There were four people and two canoes on this trip. Until recently there had not been enough water for this to be possible, but with the healthy amount of rain the spring had provided us there was more then enough, on the border of too much actually.

After a couple of small shoals and ledges we came to our first real rapid, Dam Sluice. This is an old loggers sluice where the river is three quarters dammed which leaves you only a little room on the left. Run this class II-III rapid straight on and prepare to turn right to miss a rock on the left bank.

Big slide is next. Run this class II any way you like.

After the river meets with the North Fork Chattooga the river takes on a totally different attitude, this is the start of section II.

The first couple of miles are calm and then you will here the water roaring. There were several class I & II rapids on this section never giving us much of a break. It seemed as soon as you got through one set you were starting another.

Finally about 3/4 the way through section II we came to the roughest rapid in the first two sections, Big Shoals. This is a solid class III that with the high water was bordering a class IV. There is an island in the middle of the river here and we wisely stopped and scouted things out. We decided to take the left side but the right would have been possible also, but it was harder to scout. My brother Jamie and friend Jim went first while Rob and myself stood on the Island, cameras ready. It was picture perfect, they made the hard turn right at the top of the rapid and hugged close, but not to close to the undercut rocks that were attached to the Island avoiding a large standing wave that was just a little on the left. Then it was time for Rob and myself to try our luck. We handed cameras off to the other two and started the paddle toward the drop. We made a hard right, but not hard enough, getting clobbered by the aforementioned wave half way down. In the drink we went. I bumped a few rocks and washed down stream in very cool water. Rob somehow managed to end up back in the swamped canoe and finished up without a paddle. The next couple of miles to our take out at Earls fords were scattered with small rapids, never letting us loose our adrenaline rush.

The take out at Earls ford was strenuous to say the least, a 1/4 mile hike up hill to the parking lot. We left very tired and happy.

Numerous campgrounds both primitive and full hook up are scattered about the area. Try Oconee State Park near Mountain Rest for the best campsites, cabins are also available there.

You need to leave a float plan at the Overflow Bridge Parking Area. There is a small fee to park there, but none to float.