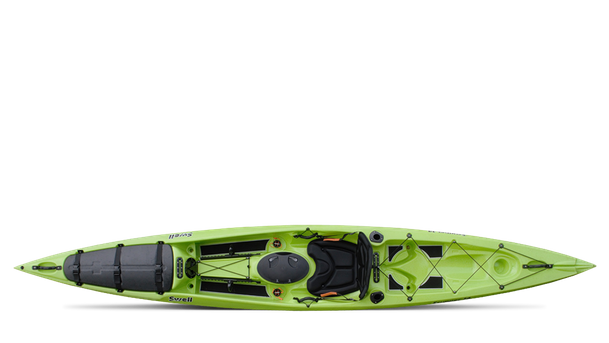 Picked one up on New Year’s directly from Jim. I had demoed one before and really liked it.

It’s 68 pounds which makes it somewhat heavier than some of the sit insides I’ve seen, but much lighter than the other SOT’s I’ve looked at. I can car top it on or Ford Escape easy enough. Was a little awkward putting in at the Seabeck Marina, but that is because there are no steps and there is a 4’ drop from the pavement to the water/beach, depending on the tide.

Jim warned me that the initial stability is not super great, and I thought I was going to swim for 1/10th of a second when situating myself in the boat initially, but the great secondary stability kicked in and I was cruising nicely straight away.

I chose a beautiful PNW rainy day for the initial paddle. I now know that this boat can make misery enjoyable. My goal was to paddle to Little Beef Creek. I knew I was pushing my time allotment given by the Mrs., but the speed at which I was able to cruise along at bought back much of the time I had lost filling up the vehicle.

The scupper Venturi valve deployed easily and as I cruised along, any water would be sucked down the hole via the Venturi effect. When I stopped, the occluder ball floated to the top of the plug and prevented further water entry. The only downside is forgetting to pull them up when hauling out. Tore off a piece of the flange on the pavement. Won’t affect function or aesthetics (its on the bottom of the boat), but my pride suffered a bit. I had actually convinced myself I’d remember, but t rain drops falling on my head had become a not so happy tune by then — I was cold and wet, not fault of the kayak.