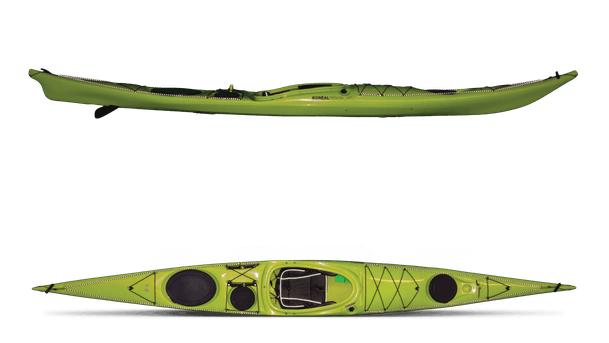 This boat is designed for the larger paddler - 200-300 lbs, and you can tell. Plenty of room for a larger person but with the length and lines to be fast and fairly agile. The slight rocker makes it easy to turn, and the adjustable, retractable skeg lets you fine-tune for the wind. Comfortable seating and knee pads, with tons of space for gear in the three hatches. Excellent deck rigging and a spot for your on-deck compass round out a very nice package for the paddler who needs space for themselves and gear.

I picked up a Saranac for $300. It needed work, but after sanding, patching and painting it looked better than new. Well, maybe not better but pretty good! I put it through its paces on a week-long Scout paddling adventure that began on a very swollen Little Miami River in Southwest Ohio. I had reservations at first due to the minimal rocker (3/4 inch) and somewhat short and wide build (15.5 feet and 35.75 inches wide), and the fact that we were loaded with gear; I'm 250, my Scout paddling partner was around 110 and we had 150 lbs of gear or more. Now, I've run rivers in Old Town Royalex Campers and Discoverys, old aluminum barges and plastic rentals. The Old Town boats are solid performers and carry lots of gear, with significantly more rocker. But I found the Saranac a superior performer all-around. It was very nimble in the moving water, especially considering my bowman was a complete amateur (but a very fast learner!) She can turn on a dime and cut the water beautifully. She also runs more shallow than the other bigger, heavier boats; ours was the only boat to thread the very thin shallow needle of a tight s-curve section without having to walk the boat through. The very good secondary stability gave my young Scout partner confidence. When the water got too heavy for the young Scouts (an upstream dam was opened and there was lots of rain), we moved to a large local lake. Again, the Saranac outperformed the Old Town's by a significant margin. It tracked beautifully, glided further and was faster than the other boats. Plus, at only 55 lbs, it was soooo much easier to manage out of the water. Now, it's no Minnesota II (perhaps the greatest lake canoe ever made), but it was a joy to paddle on non-moving water. I love this boat and think Wenonah totally undersold it when they were making it.