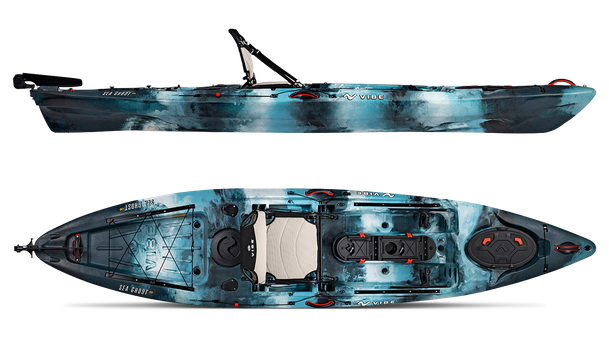 I have had my Sea ghost 130 for a few months now and try get out on it a few times a week. I normally get out on either a local river that is calm minus heavy pleasure boat traffic where wake is allowed or on Lake Huron. Both areas are riddles with pleasure boats and the lake sees a lot of freighters but the Sea ghost handles the wake surge and waves great, only occasionally do you get any water over the bow and that normally only when they are 3'+.

The kayak is very stable, many people fish standing up from them, I myself have not, my balance isn't the greatest lol. Without the rudder down it tracks straight with very little to no wag while paddling. Turning without the rudder is better than i expected for a 13' boat, as long as you have some speed digging in will turn you. With the rudder down it tracks like its on rails and turns sharper. The weight rating is no joke, im about 220lb, and with probably 80 extra lb of stuff the kayak is still a ways out of the water. A buddy's tarpon 12 looks like it's sinking with near the same load.

Seat is great, we have had a few 9hr fishing trips and there was no discomfort or fatigue. The mesh helps it stay cool, and it does try pretty fast if you get it wet. The two seating positions are nice, i normally stay in the high position. You feel a bit more roll in waves in the high position but not enough to cause stability issues.

Hatches are nice, they include bags which makes them great for small items you don't want to lose in the kayak. The front one is tricky to reach while on the water, but the back one is easy to get to, depending on how long your arms are it might be tough to reach the bottom. Center console is huge, but the cup holder does cut into the storage space so be mindful of where that is located on the lid and pack around it. There are tons of spots to mount scotty's or ram mount adapters on the lid of the console, along with a fish ruler and cup holder. The two spots next to the seats do fit the plano boxes well, but the bungee retention idea could use some work as they tend to pull the boxes down and push them under the seat. A nylon strap at the bottom to hold the boxes from slipping under the seat with the bunge string on top to hold them in would be a cheap fix and make it much more useable. I like that the gear tracks are molded into the body of the kayak, it makes hanging your legs over much more comfortable than some other models where they mount on top.

It is heavy, but if you are considering a kayak like this you should be expecting that. I use a cheap cart, makes moving it a non issue. If you are loading on the top of a vehicle, especially with j bars it could be tricky. I have a truck so I just set the nose on the tailgate, lift from the stern and it slides in. I do have some bed racks for camping since it would hang over the tailgate far enough to hit my camper. Getting it 8' in the air is a two person job.

I wouldn't change much about the kayak, maybe if Vibe put an anchor trolley on it that would make the "ready to fish" appeal a bit more, and their cost would be very low as there isn't much to them. The improvement to the planno tackle box retention system i mention earlier would be pennies to fix from the factory and some a lot of frustration. I honestly wouldn't mind the center console being a bit taller, it's already there, getting some extra storage wouldn't hurt for no real loss.

Vibes Customer service is great. My first one arrived with what looked like someone stabbed it with a hi\lo fork. the gouge was the size of my thumb and deep, like im surprised there is that much material deep. One call and they had another one on the way.