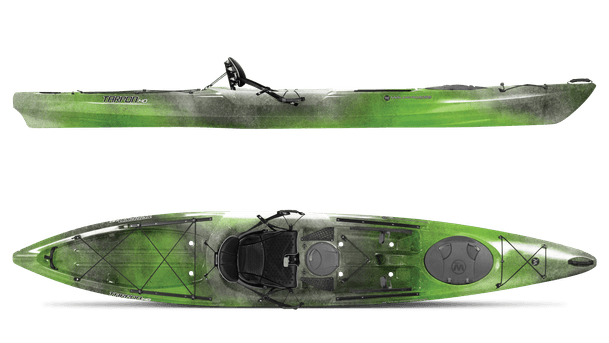 I bought this kayak second-hand not knowing much about kayaks or kayak fishing. It happened to pop up on Craig's list when I was looking for a boat. I am glad it did. I really love this kayak for its speed, maneuverability and cargo capacity both in the rear tank well and inside the hull. I have tried various pedal boats but found them to be more work than paddling the Tarpon as I would constantly need to adjust the rudder to keep on track. The Tarpon tracks straight as an arrow with little input from the foot controlled rudder. Paddling is effortless. It is only 28" wide but very stable although I would not attempt standing in it. Inside, I can easily store 10 rods of any length when on the road and the tank well holds a standard size crate and a wheeled cart with room to spare. There is more than enough storage space for a multi-day trip if you are so inclined. Lots of gear track fore and aft as well. I have had this in the ocean and it handles the waves very well. One nitpick: the hatches could be a little more water tight but I am normally on lakes and small rivers so this is not a major issue for me. I also wish it had a replaceable keel plate at the back as it gets pretty scuffed up when car-topping. It can bee a little unwieldy car-topping by yourself due to its length and lack of handles between the bow and middle. I added a handle on the upper part of the center "console" just in front of the foot pegs. I trailer it now so this is no longer as issue. All in all, I was considering getting into a pedal boat but, after trying many, I am sticking with the Tarpon.