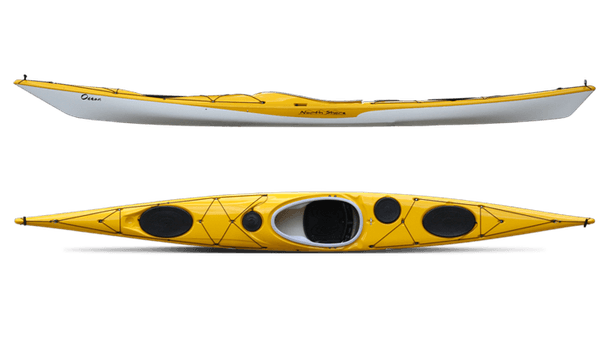 About me: I've been paddling ocean kayaks for about 35 years. Mostly expedition paddling of two weeks or more. I've paddled a lot on the west coast of Canada, less in Nova Scotia, Maine and the Great Lakes. I have paddled a lot of boats a lot of miles: Mariner, Nimbus, Nordkap, Necky, Current Designs. I currently own the Force 5, a North Shore Ocean 17 ( another great boat ), and a Nimbus Telkwa. The Force 5 is my latest acquisition, purchased as a very fast expedition kayak with a nod to all the years that I paddled a Grand Mariner. I wanted a fast, rudderless expedition kayak that didn't take as much effort and body language to paddle and correct as my old Grand Mariner did.

I spent 4 days in early November 2016, trialing my K-lite layup Force 5 in the San Juan Islands of Washington State. The place where I launch is on Hale Passage, a small straight between the mainland and Lummi Island. It is known for strong tidal currents and verying bottom geography which creates strong rips and upwellings. The first two days, there were both strong tides running and winds from 25 to 30 knots. On the first day, the wind was gusting against a 3 knot ebb tide creating white capping waves of over one metre in the main channel.

So how did this boat perform? She is 18 feet long and less than 21 inches wide, with a flat bottom and virtually no rocker. I was paddling her empty for my sea trials.

What can I say/ I LOVE this boat! On calm flat water, she feels stable and docile. As soon as you get on living water though, she begins to show her Thoroughbred lines and personality. Each day, it took me ten to fifteen minutes to get accustomed to her liveliness in moving tidal currents and waves, but once my own skitishness settled, she showed her true capabilities. The boat is fast, very fast! She tracks like an arrow on a flat keel, but turns easily on edge. She handles rough water and breaking waves with ease, a simple lean or a quick brace and carry on. She fits like a glove and I felt wholly at one with this boat. She tracks and handles extremely well without deploying the skeg. The only exception is a bit of moderate weather cocking with strong following winds, which deploying a bit of skeg quickly corrects.

On my third day of trials, the wind moderated to light and I took her out for a power paddle around the South end of Lummi Island. Did I mention this boat is fast? On my return up Island again in Hale Passage, I paddled her against another strong ebb. She cut throught the ebb current and paddled into it with little decrease in speed or increase in effort.

The Force 5 is a fast expedition boat par excellence. The useable packing volume is rated at 181 litres. The total volume is listed a 380 litres which is excellent for a British style design. I can get an extra 10 or15 litres of storage with a dry bag in front of the foot braces, so she will definitely handle enough gear for extended expeditions. I plan to use that capability for two trips this spring and summer on the Salish Sea and the West Coast of Vancouver Island.

This is definitely a boat for an experienced paddler, however, I think she would also reward a keen novice who is careful, takes some time and instruction and is keen to learn. With the three versions, Category 3, 4 and 5, there is a size of this design to fit most paddlers.

The Impex line is now manufactured by Abatibi & Co. located in Northwestern Quebec. They apparently have the same quality control manager as did Mid-Canada Fibreglass who previously manufactured these boats. I am very happy, no "stoked" that Impex line of kayaks will still be built to the highest of North American standards. So many North American kayak manufacturers have gone out of business, or been bought out by multi-national corporations that decrease quality and eliminate models that are not huge sellers in the low end recreational market. Cudo's to Abitibi and Co., may you have success and continue to produce and sell performance ocean kayaks that are built for adventure and to last.