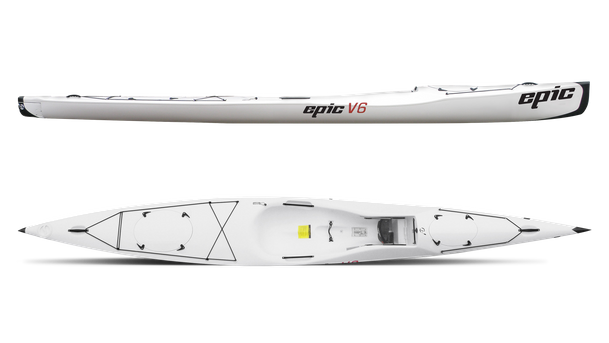 by Epic Kayaks Inc.
Details
Last week I rented the V6 Epic surf ski/SOT from Naples Kayak company in South Naples Florida. I was looking to experience a performance SOT, and something I wouldn't struggle to cartop. I never paddled a surf ski before and was a little hesitant when I first sat on the V6, but the secondary stability was realized in a few minutes. Over the week I paddled some 45 miles of mangroves, open water and the gulf.

She was fast and tracked as straight as an arrow, the skeg type rudder with its top of the foot peddle adjustment was ingenious. She was effortless to paddle even straight into a 15 knot breeze and chop. The light weight was amazing while other fellow SOT paddlers struggled to haul their boats on and off their cars, the V6 was a one arm carry and with ease to mount on the roof.

The only complaint I have was the minimal space I had to store anything, etc. Water bottle, chart or binoculars. I think Epic would do very well if they designed a true SOT, say 26 inches wide, staying with performance but adding a little stability. The kayak would appeal to many SOT enthusiasts, breaking there backs lugging 70 lbs and better.